BREAKING
Israel-led Team Solves Mystery Why Lightning Strikes Fewer Times Over The Ocean...
Tourism In The Holy Land Is Soaring Back Up To Pre-Pandemic Highs
Lapid Speaks Directly To Palestinians—Offers Them “Another Way” Out Of The Ongoing...
Home Tags Posts tagged with "Satanic Attack"
Tag: 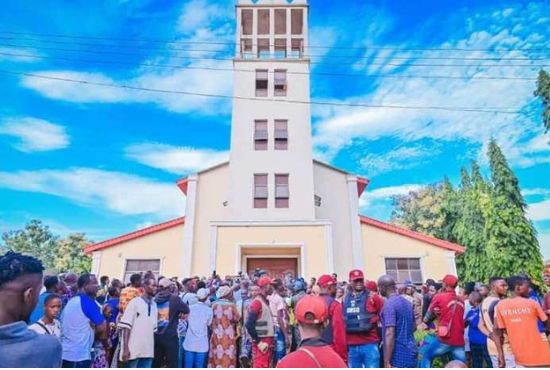 Over 50 Worshippers Died After Gunmen Attack Church In Nigeria

Over 50 worshippers died after several gunmen attacked a church in Nigeria during the Pentecost Sunday. Authorities are calling this gruesome massacre a “Satanic attack.”

On June 5, during the Pentecost Sunday, several gunmen attacked a church in southwestern Nigeria. They shot at the churchgoers and even detonated explosives inside the church building. A priest was also reported to be abducted by the terrorists.

Legislator Ogunmolasuyi Oluwole revealed that the attack happened at St. Francis Catholic Church in Ondo state just as people started gathering to worship. According to reports, some of the gunmen invaded the church while the others were outside to shoot those who try to flee in terror.

Adelegbe Timileyin, the representative of the Owo area, reported that at least 50 were killed during the horrifying attack. Some of those who were killed are children. The number is still expected to rise as retrieval attempts continue.

Ondo Governor Rotimi Akeredolu posted a Tweet to express his grief with what just took place. He even labeled the attack as “vile and satanic.”

“I am deeply saddened by the unprovoked attack and killing of innocent people of Owo, worshiping at the St. Francis Catholic Church, Today,” he wrote in a Tweet. “The vile & satanic attack is a calculated assault on the peace-loving people of the Owo Kingdom who have enjoyed relative peace over the years.”

He also said that the people involved in this gruesome attack will be hunted down and they will pay for their crimes.”