A woman who was sold for sex slavery at a very young age and molested as a teenager found healing when she accepted Jesus in her heart.

Kim grew up in a struggling family with 12 siblings. All of them suffered the abuse of neglect by their own parents. As a result, forging through garbage was a normal way of life to survive. Then at 3-years-old, a family member sold her for sex slavery in exchange for drugs or food. She started cutting at a very young age to scare her molesters away, but she was wrong.

At 8-years-old, the social services rescued them and took her to a foster home that separated her from her siblings. Unfortunately, over the next six years, she stayed in different foster homes where she experienced sexual and physical abuse.

Then at 14-years-old, Kim went to live with her Christian grandmother, who began taking her to church. But she still rejected God at the time. Revenge and anger still filled her heart.

One day, while walking, she passed a church and heard a hymn that resonated within her heart. Then finally, she began praying to God.

“I know You don’t know who I am because if You knew who I was, You probably wouldn’t let all these things happen that happened to me. But I hope You want to know me because I want to know You,” Kim told God.

And she started asking God to help her how to find Jesus. When she became an adult, memories of abuse tortured her, and she wished death on her abusers until she met a Christian guy named Alan.

This Christian guy invited her to church, and there she began to know Jesus. There, she accepted Jesus in her heart and was baptized.

At 19-years-old, Kim married Alan and graduated college with a degree in social work and business administration. She wanted to provide safe homes for children and became a foster care mother.

God’s redeeming power is evidently seen in Kim’s life today as she became an award-winning writer and movie producer. God is so good!

David Zach is the lead singer of Remedy Drive, a Christian rock band. However, he is also a passionate advocate for helping young girls who have been sold into sex trafficking. Teaming up together with the anti-human trafficking organization The Exodus Road, Zach has gone undercover in Asia and Latin America to record evidence of sex slavery and bring about freedom for the young women caught in human trafficking rings.

Currently, The Exodus Road has 63 operatives working undercover in 12 countries. Their tireless efforts have led to 927 rescues and 398 arrests. Zach has been involved not only personally with the giving of his time and life to go undercover, but additionally as a donor to the organization. Though Remedy Drive has no management team or record label, their fans have succeeded in raising more than $300,000 to further the work that The Exodus Road is doing both in our nation and internationally.

It is so important that The Exodus Road and similar organizations are able to continue their work and rescue those sold into human trafficking. The Global Slavery Index estimates that there are 45.8 million slaves globally who are in desperate need of rescue.

Zach says his personal experience working as an undercover operative has left him haunted by the horrors and brokenness that he witnessed first hand.

“There is one girl in particular who really haunts me. She was maybe 14 years old. She has braces. She was very shy… I asked to talk to her and the person selling her brought her to me. I said that I wanted to take her with me for an hour. In their language, they argued but I couldn’t understand what they were saying.”

After a few moments of arguing Zach was told that the girl would be ready for him in a week and so Zach left not knowing what had just happened between the seller and the young girl until his translator played back the footage the next day.

“The handler said, ‘You must go with this man.’ The girl said, ‘I don’t want to.’ [Then he replied], ‘You have to start going with the customers. The bar owner demands it.’ [She replied], ‘But I thought I could make enough money just selling drinks and dancing.’ [Then he continued], ‘No, you must pay back your father’s debt.’” 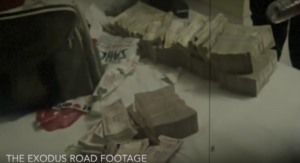 After recounting this story to the Christian Post, Zach shared that the story of this girl is the same for every young woman he encountered. They are brutally taken out of their hometowns and brought to the brothels and red light districts where they are forced to face the realities of their horrific new lives.

“Sometimes the people selling these girls are directly connected with organized crime syndicates; sometimes they are employees of brothels or dance clubs and part of their job is to negotiate price,” Zach explained. “The mechanism of how this is all happening, who is taking these girls from the countryside, how they are ending up in these brothels – these are the things that those doing investigative work have to piece together in order to gather actionable evidence that will move local and regional authorities to take action against these criminal networks.”

Though each win for The Exodus Road may seem like a small step in the ever-growing spider web of human trafficking, Zach explains that each defeat for traffickers sends the message that people are working hard to end trafficking.

“Even when the whole world is looking the other way, someone is looking out for these daughters and sons.”

Contact The Exodus Road to find out how you can help towards the fight to end modern-day slavery.