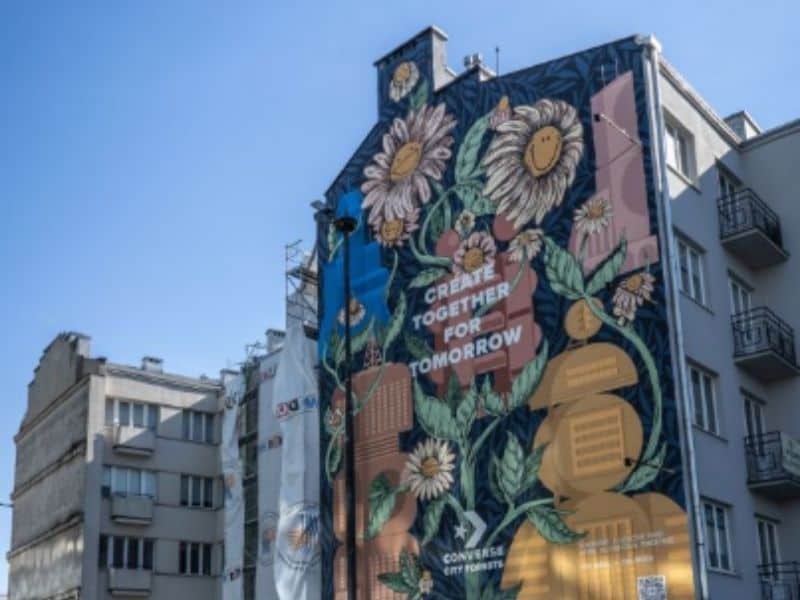 The mural is part of the City Forest Campaign from Converse, one of the big shoemaker in the industry. A spokesman from Converse said, “Pollution levels have dropped in many cities around the world as people are no longer commuting as much.”

“Companies are working slower, and for the time being everything has slowed down. At Converse we saw this as an opportunity to speak up and help produce fresh air through painting murals. Furthermore, we felt it was a good way to reunite communities as they return to normal life after such a long period of isolation.”

Moreover, the paint in the mural has titanium oxide which turns air pollutants into harmless nitrates and carbonates. The mural reportedly can clean the surrounding air equal to 720 trees. The finished project is the equivalent to Converse planting 3,000 trees. 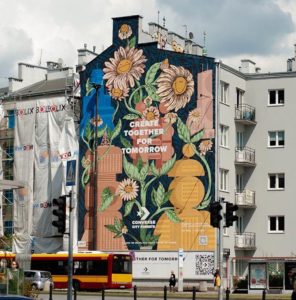 Artist Maciek Polak and Dawid Ryski designed the mural. Good Looking studio painted it on the side of the building located at popular metro stop. It features smiling flowers amid high rising towers with words, “Create Together for Tomorrow”. They hope to promote positive impact for the future as locals start to go back in their normal lives.

This is not the first time a smog-eating mural has been introduced in hopes of purifying air. Early last year, a body of students called Greeks Gone Green in California put up a mural in Price Center. They hope to reduce impact of smog emitted from cars. Shashi Mostafa, the mural’s artist, said, “Raising awareness toward the problem is one of the first steps in getting more people to make the push.” She added, “So that everyone, no matter what social class, will benefit from a healthier environment.”