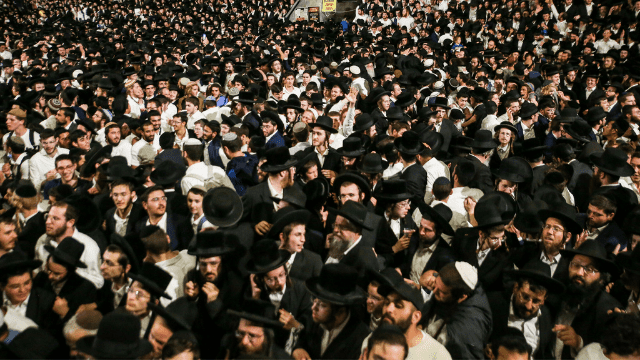 At least 45 people are dead and 150 injured after a human stampede at a religious ceremony in northern Israel Thursday night. This is the largest peacetime civilian disaster in Israel’s modern history. Prime Minister Benjamin Netanyahu has called it a “grave disaster” and has declared Sunday a day of national mourning.

Reports that a group of nearly 100,000, made up almost exclusively of ultra-Orthodox Jews had flocked to Mount Meron, the site of the tomb of a 2nd-century sage, Rabbi Shimon Bar Yochai. It is an annual time when worshippers light bonfires, pray all through the night, sing mystical songs, and dance in commemoration of Lag Ba’Omer, a holiday that marks the 33rd day between Passover and Shavuot (Pentecost).

What is Lag Ba’Omer?

The Talmud teaches that God sent a plague that took 24,000 lives, all of the followers of the most revered rabbi in Judaism, save Moses, Rabbi Akiva. The Talmudic tradition claims that the plague ended on the 33rd day of the counting of the Omer (Lev. 23:15ff). Tradition says that Shimon Bar Yochai was one of just five Akiva disciples that survived the plague. He went on to become the father of Jewish mysticism. In addition, Bar Yochai died on Lag Ba’Omer, years later.

After last year’s commemoration was canceled due to COVID-19, police were anticipating hundreds of thousands of pilgrims to visit the site over the two-day event. Only 10,000 were to be allowed near the tomb. Large screens had been stationed across the mountainside to accommodate additional revelers and provide room to spread out.

Witnesses report that people, including children, were being crushed and trampled in a notorious tight passageway around 1 a.m. Israeli time.

“We thought maybe there was a (bomb) alert over a suspicious package. No one imagined this could happen here,” a pilgrim told Israel Channel 12.

“A grave disaster on Mount Meron,” Prime Minister Netanyahu said. “We are all praying for the recovery of the injured.”

The government has launched an investigation to figure out what led to the tragic accident. Thousands of police and security personnel are on the scene. A field hospital was set up on-site, and more than 250 ambulances and six helicopters were called to transport the injured to area hospitals, according to Magen David Adom, Israel’s national emergency disaster service.

There are at least five children among the dead and several foreigners, including five Americans. Funerals have already begun in Israel. US President Joe Biden called Netanyahu to express his sympathies.

“The United States stands with the people of Israel, and with Jewish communities the world over, in mourning the terrible tragedy at Mount Meron,” Biden said.

Netanyahu urged Israelis to help the victims by donating blood. “Thank you to many of the citizens of Israel who donated blood today,” the prime minister, who also gave blood, tweeted. “In the moments that test us, our people unite as we see today.”

In secular Tel Aviv, hundreds lined up to donate blood for the survivors, marking a rare moment of peace between the ultra-religious and worldly occupants of Israel’s version of New York City. Residents in Arab towns near Mount Meron opened their homes to the victims and weary responders.

While now is a time for mourning, it is also a time for reflection and a time for Israelis from all backgrounds to stand united.

Many of the worshippers at Meron believe that their deceased rabbi still has mystic powers today in the afterlife. One attendee who survived said, “Rabbi Shimon used to say that he could absolve the world…If he didn’t manage to cancel this edict on the very day of his exaltation, then we need to do some real soul-searching.”

“Certainly, the disaster at Meron…is heart-breaking. There is no other word for it than a human and humanitarian disaster. Yet, this event was horrible in several other dimensions that raise moral and spiritual questions as well. At the Meron event, police forces made a great effort to control the crowds and were resisted physically, even violently. The organizers totally disregarded every warning on health and safety issues.”

“On a spiritual level, the event was promoting a false Messiah, with a promise of false salvation, both temporally and eternally. Those involved in the disaster were part of an extremist cult. The event that evening went on for hours with a cultic and wild enthusiasm which could be compared in some remote way to a rock concert or drug festival.”

It is true, the minority community of the ultra-Orthodox lives in constant distrust of the secular world around it. They do not trust the police or the government. They defied COVID-19 restrictions and accounted for a highly disproportionate number of cases of Coronavirus as a result. And, 100,000 of them gathered in an area reserved for 10,000, even bringing their children, putting them at risk.

Let us be in prayer for the survivors and the families of the deceased. Let us also continue to pray for a true spiritual awakening in Israel.