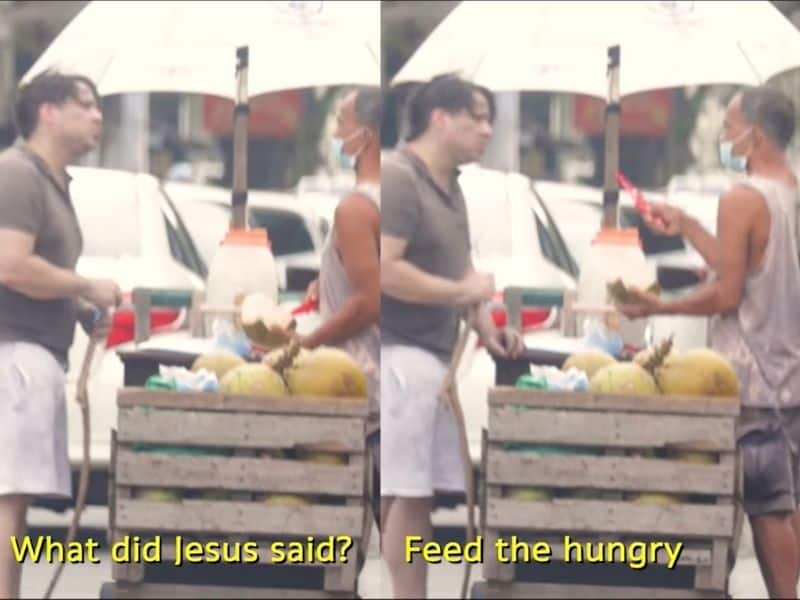 A YouTube vlogger pranked a street vendor in the Philippines by disguising himself as a beggar. He asked for some food from the vendor, but he did not expect to receive it physically and spiritually.

Prank with a heart

Sam was originally from Syria and now has been living in the Philippines for 15 years. He created a Youtube channel to upload his videos of fun and good cause.

He said, “Although prank videos are funny, I have decided that I should do more than just make you laugh.”

So, he made video content of pretending to be a beggar to ask for free food from vendors. But, he would later reveal himself and give away financial gifts or in kind.

However, one street vendor stood out from all he approached. Bebot did not just give him food for his stomach but even food for his soul.

The video first showed Sam appealing to Bebot for free drinks. He said, “I don’t have money. Maybe, you can give me one? I didn’t drink for a long time.”

Sam then commended the vendor’s good gesture. To this, Bebot replied, “What did Jesus say?”

“Jesus said, ‘Feed the hungry. Give drink to the thirsty.'”

He added, “The Bible teaches us not to belittle anyone, whether you are rich or poor. The Bible said if the person is thirsty, give them a drink and feed those who are hungry. Everyone deserves to be respected, even the little children.”

When Sam finally showed his true intentions and blessed Bebot. “Because you are very kind,” Sam said.

The kind man teared up and humbly said, I am only obeying the Lord.”

The video went viral for Bebot’s generosity and his action in following Jesus.

Isaiah 58:10 says, “Feed the hungry and help those in trouble. Then your light will shine out from the darkness, and the darkness around you will be as bright as noon.” 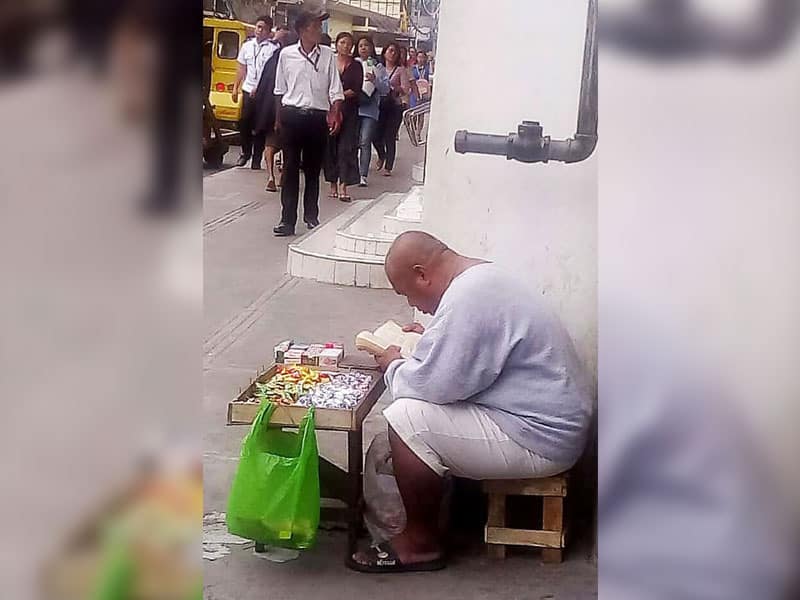 A street vendor in the Philippines went viral after being captured reading the Bible during his free time.

Luren C. Padinas witnessed the heartwarming moment and posted it on Facebook. She wrote how she was very amazed of the man and immediately took a photo of him. 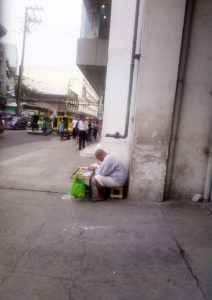 The vendor was selling candies in the streets beside what the netizen said to be a mall. Luren described that the man looked so happy reading the Bible. And whenever he had no customer, he grabs the opportunity to read it. Although he had little free time, he spent it in reading God’s word.

On top of that, he wasn’t mindful of the people passing by him. It can be seen in the photo how the street vendor was seriously eager to read the Bible.

The viral post with over 15,000 shares received various reactions from the netizens.

And Eliseo Bernadez Bayquin user commented, “Seeing people of this much devotion to their faith is really admirable. I also saw a young lady and an off-duty guard doing so. ????”

Moreover, a user named Hannah Mae P. Jotojot quoted a biblical verse depicting what the street vendor did. She wrote:

19 “Do not store up for yourselves treasures on earth, where moths and vermin destroy, and where thieves break in and steal. 20 But store up for yourselves treasures in heaven, where moths and vermin do not destroy, and where thieves do not break in and steal. 21 For where your treasure is, there your heart will be also.”

A Blessing And An Inspiration

To sum it all up, countless individuals were blessed and inspired of his life. We can learn a great lesson from him that not even our circumstance can hinder us from meditating God’s word. For it is written in Joshua 1:8, “Keep this Book of the Law always on your lips; meditate on it day and night, so that you may be careful to do everything written in it. Then you will be prosperous and successful.”

Oh what great treasure awaits for him in heaven!