BREAKING
Catch a Ride on a Shared Scooter—“Micro-mobility” Coming to Tel Aviv Next...
Israel Military to Conduct First-ever Simulated Strike on Iran
‘Injury to the Heart of Iran’: Details on the Life and Death...
STAND WITH UKRAINE
Home Tags Posts tagged with "summit"
Tag: 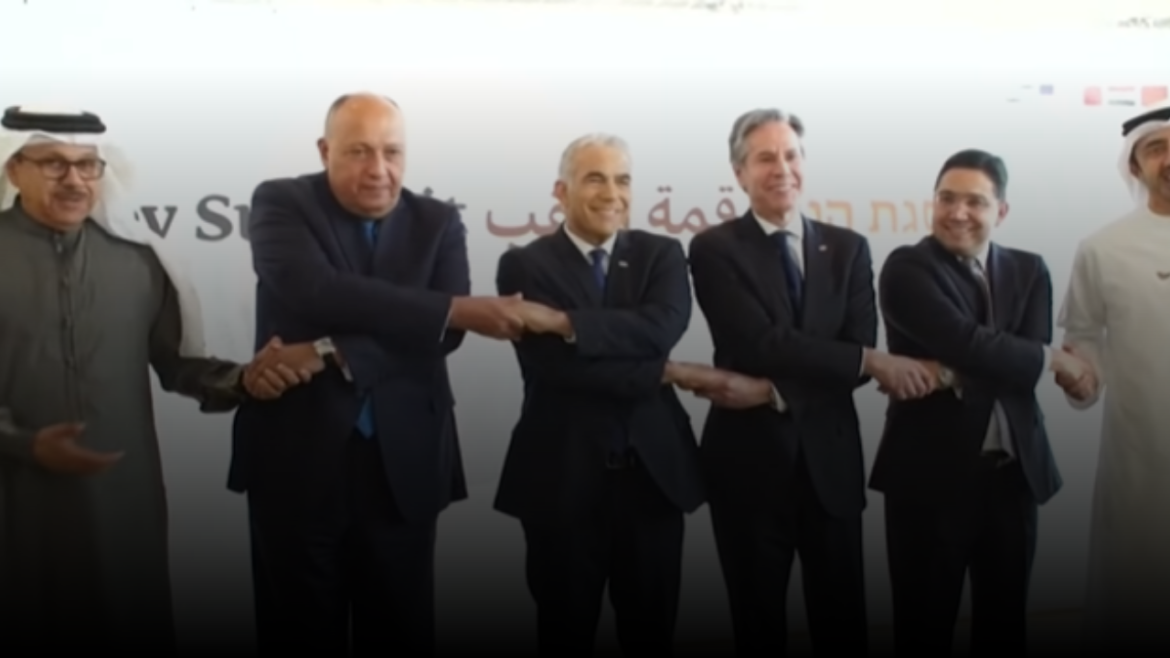 This week, the foreign ministers of four Arab states, Israel, and the US Secretary of State, met in the Negev Desert for a historic regional summit—strengthening ties between former enemies as they face a growing threat from a common foe—Iran.

The foreign ministers of Israel, Egypt, Morocco, Bahrain, and the United Arab Emirates, as well as the US Secretary of State, met in Sde Boker (an Israeli town in the Negev Desert) for what is being hailed as the first “Negev Summit,” a forum the leaders intend to make ongoing and permanent. The two-day summit’s location had special significance—Sde Boker is the former home of the father of modern Israel, David Ben Gurion, and is also where he is buried. It overlooks the largest machtesh (like a crater) in the world.

Israel’s Foreign Minister Yair Lapid said that together they are building “a new regional architecture based on progress, technology, religious tolerance, security, and intelligence cooperation. This new architecture, the shared capabilities we are building, intimidates and deters our common enemies – first and foremost Iran and its proxies. They certainly have something to fear.”

At a joint press conference after the meeting, Lapid, along with US Secretary of State Antony Blinken, and the foreign ministers of Egypt, Bahrain, Morocco, and the UAE, all condemned the recent string of terror attacks in Israel. In a little more than a week, there have been four attacks and a total of 11 people murdered and several wounded.

“It was murder for the sake of murder, terror for the sake of terror,” Lapid said. And he said that while the terrorists want to create panic and stop the progress being made between Israel and her Arab neighbors, “they will not succeed…(we will continue on the) path of peace.”

The door that opened with the Abraham Accords just a few short years ago under the Trump Administration has now resulted in Israel and her former enemies sitting down to work together—IN Israel.

US Secretary of State Antony Blinken said that “once-impossible things have become possible.” He called it a “new dawn” and pledged that the US would continue to support the growth of these regional ties economically and diplomatically and would support its allies as they confront common enemies, such as Iran. However, Blinken also stressed that he hadn’t lost sight of the Palestinians and his commitment to making sure they enjoy “equal measures” of prosperity and security along with Israel.

UAE chief diplomat Abdullah bin Zayed al Nahyan was very pleased with the growing relationships between Israel and her Middle East neighbors. For decades, only Egypt and Jordan have had any diplomatic ties with Israel—and at times, even those connections have been strained.

“Even though Israel has been in this region for a very long time, this is our first time. We haven’t known one another. It’s new for Abdullatif and Nasser and I to be in Israel,” al Nahyan said, referring to the other Arab foreign ministers present. He also praised Egypt, who “showed us leadership 43 years ago” in normalizing relations with Israel. “We lost those 43 years, (now) we are just trying to follow your footsteps,” he said, looking at Egypt’s foreign minister.

For years the Arabs decried Jews in the Middle East, but they have come to see that Israel can help them achieve prosperity and security. 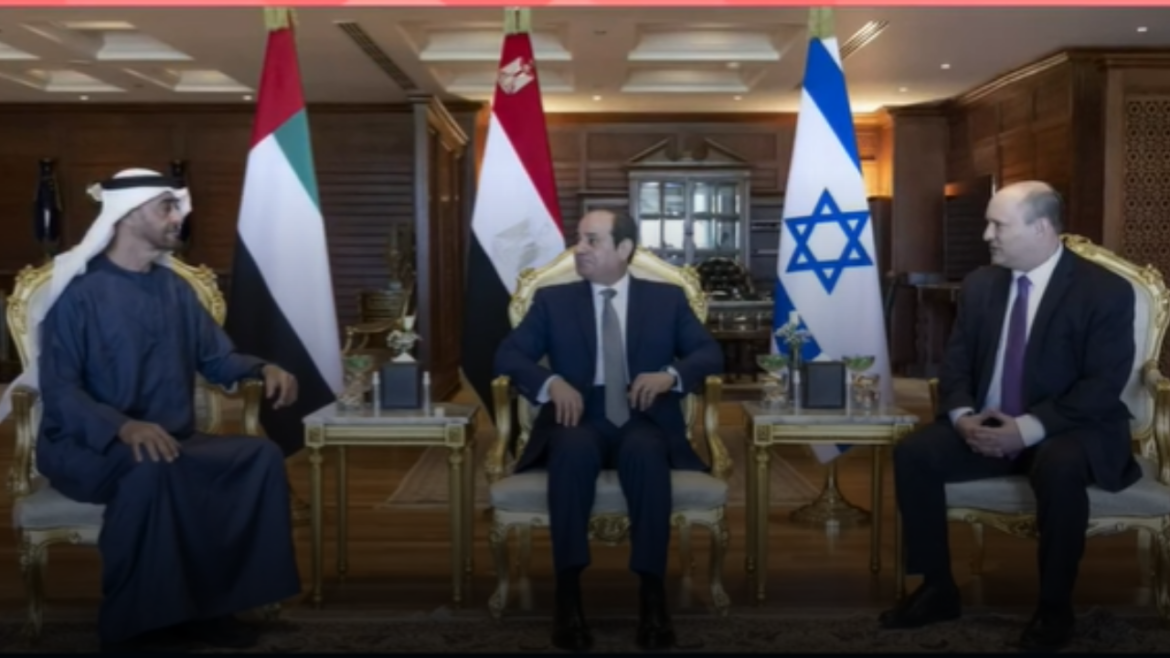 Israel Prime Minister Naftali Bennett met in the first trilateral summit with Egypt and the United Arab Emirates Tuesday, in a meeting that was initially secret but was made public by Egyptian President Abdel-Fattah el-Sissi’s office and then the other attendees.

The meeting comes on the heels of Syrian President Bashar Assad’s visit to the UAE last week and the recent announcement of a new flight between Israel and Sharm el-Sheikh in Egypt. The Sinai resort town was the site of the secret summit.

While in Sharm el-Sheikh, UAE Crown Prince Mohammed bin Zayed al-Nahyan—who hosted Assad—briefed Bennett and el-Sissi about the meeting with the Syrian president. Bennett has expressed concern about Assad’s growing push by the Arab world to normalize the dictator—but said that al-Nahyan’s information about Assad’s visit was “thought-provoking.”

According to Bennett’s office, the three leaders’ discussions also focused on regional air defense—a hot topic for Israel and its neighbors who are facing a growing threat from Iran and its proxies. Bennett shared his vision for a regional air defense network, complete with a laser air defense system.

Iranian drones and missiles seem to be filling the skies of the Middle East recently. The Houthi rebels in Yemen (funded by Iran) have increased their drone and missile attacks on the UAE. The Iranian Revolutionary Guard (IRGC—the group that the Biden administration is ACTUALLY considering taking OFF the terrorist list as a concession to get Iran to return to the 2015 failed nuclear deal!) fired 12 cruise missiles that hit near a US consulate in Erbil, Iraq.

Bennett, el-Sissi, and al-Nahyan did not discuss the possibility of Saudi Arabia joining the Abraham Accords, but Egypt’s President el-Sissi demonstrated hospitality and warmth toward Israel: displaying the Israeli flag, inviting Bennett to stay the night in Egypt and accompanying the prime minister to his plane. Sissi’s office released an official photograph of the three men, with the flags from all three nations prominently displayed.

The possibility of bringing the Saudis into the Abraham Accords did not come up during the meeting. However, the three leaders did talk about trade and tourism and “global developments” — such as the Ukraine-Russia war and its impact on energy, market, and food security in the region. Egypt gets about 80 percent of its wheat from Ukraine and Russia. Israel gets about half of its wheat from Ukraine.

And Israel continued to expand its global ties, as this week, after more than a half-century of connection with the Holy Land, Singapore announced that it will officially open an embassy in Tel Aviv. Israel already operates an embassy in Singapore. Also, Morocco announced that it has entered into a new cooperative agreement with Israel on several civilian aerospace projects.