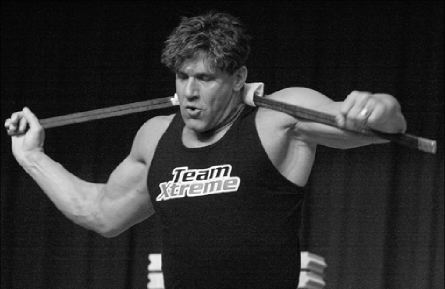 Brad Tuttle featured on GOD TV as part of Team Xtreme, a group of some of the strongest men on the planet who performed amazing feats to share the Gospel. Brad is now a pastor, with a vision to help men move beyond physical strength towards spiritual strength.

I was not raised in church, nor in a Christian home. I was a young guy that loved sports and was pretty good at them. I was captain of the football team, on the wrestling and baseball teams, and won a lot of athletic awards. That’s important for me to point out because that was the concept for me, at that time, of what it was to be a real man: sports and awards.

I ended up playing some college football, then joining the military where I qualified through much hard, physical training and testing to be a Special Operations Navy Diver. Yes, this was still ‘real man stuff’ as far as I was concerned. Now, out the military and back home again, I eventually became involved in powerlifting, and really took to it. I naively began to use steroids, and began to win powerlifting meets. Notoriety followed and I learned pretty fast the world was impressed with stature, wealth and status, and that all of these constituted what a REAL MAN was.

So, I guess I had arrived at real manhood… I was big, strong, and popular. But, here is the kicker… Even though I was highly ranked in powerlifting in the USA for my weight class and won several competitions, even though I was big, and strong, I was terribly unhappy, directionless, empty and confused. The status, the strength, the popularity and all the rest did not fill the empty void in my life. And it definitely did not make me a real man. That all changed one night in 1985.

I received a special ‘invitation only’ to the grand opening of a nightclub in Cincinnati, Ohio, due to my stature, wealth and status. I was sitting at the bar, at the nightclub with a beer bottle in my hand, when something happened that was beyond my human ability to explain. It was as if window shades rolled up and off my eyes. I will never forget looking around that nightclub and seeing my life for what it was.

I had thrown away dreams and goals. I had made bad decisions. All of a sudden, I saw it all so clear. I saw the drinking and partying and thought to myself, “Is this where my life has come to? Sitting in a bar in the dark!” Something inside of me was changing. I did not understand what it was, but I had to immediately physically remove myself from that bar.

The next thing I did was run out of there and jump into my car and drive back to my apartment. For the next three hours I was overwhelmed by this feeling of being lost. I paced back and forth in my living room trying to figure out what was going on. Why was I feeling this way? What should I do? All I could physically do was get mad. I felt so full of rage as all these emotions began to flood my body. This continual feeling of something urging me was in my gut and it was there for three hours.

I paced back and forth in my apartment like a caged animal wanting to be set free, but not knowing how. Something was happening. Something was changing. The world seemed at that moment to have nothing to offer me that could bring me true peace. That urging inside of me kept on. It wouldn’t stop. Then came the moment of truth. I heard a voice deep inside of me say this word to me, ‘Pray.’

Little did I know my conversion experience was happening at that moment. I walked into my bedroom as a 325lb steroid-filled broken man, and fell on my knees by my bedside. I raised my hands in the air as a form of surrender, tears streaming down my face, and I remember thinking, ‘How can I put this into human words? How can words explain this moment? They can’t.’

With my hands in the air, my pride gone, tears streaming down my face, my heart broken, my eyes lifted up to Heaven. At that moment I realized I was a dirty, filthy, sinful man (not a real man) unraveled before an Almighty Holy God and I needed to ask for His forgiveness.

In my apartment, on my knees, fully surrendered to the Creator of the Universe, the precious Gospel message that a young Navy man shared with me years prior came flooding into my mind at that precise moment. Then I spoke passionately and desperately out of my mouth, ‘Jesus!’ Then I cried out from the depths of my soul, ‘Jesus forgive me for my sins. I am so sorry for the things I have done against you. Please be in my life. I am a sinner and I need you to be my Savior!’

I prayed those words from a truly repentant heart. I will never forget how I felt as I knelt there by my bed weeping for at least two more hours. I had been washed in the blood of Jesus. My sins were washed white as snow. I was radically changed! Never to be the old man I used to be, but a new creation in Christ! I had been given a new nature; His nature. I truly received Jesus Christ into my life, into my heart as my Savior and Lord.

I had a true conversion experience. I did not know it then, but I know now, the moment that I prayed the prayer of faith in Christ, the Holy Spirit came to live inside of me and took up residence (Romans 8:5). I was never the same again from that moment on. I was pulled out of my sin by Jesus Christ and He set my feet upon a solid and firm foundation.

The ‘old man’ had passed away and behold the ‘new man’ came to life. My chains were broken and I was set free! And, yes, that’s the day I became a real man. A man who realizes he is nothing without Christ. A man who has surrendered all of his life to God.

I have been in the ministry now for 32 years (as of 2018) and I can tell you that my passion for Christ is as strong as ever. That’s how God makes real men. What about you? Are you surrendered to Christ? Give Him your life today, and watch what He will do through you! God is in the business of making real men.

This article was written by Brad Tuttle, a former US Navy diver and national powerlifting champion. Brad was a member of The Power Team and now pastors the Harvest Church International, along with his wife Jana.