BREAKING
US Voices Concerns Over West Bank Rise in Violence in 2022
“Once in a Lifetime” Ancient Burial Cave Discovered South of Tel Aviv
Five Texas Cows Arrive in Israel—Cause Stir of Speculation about End Times
Home Tags Posts tagged with "The Prince of Egypt"
Tag:

The Prince of Egypt 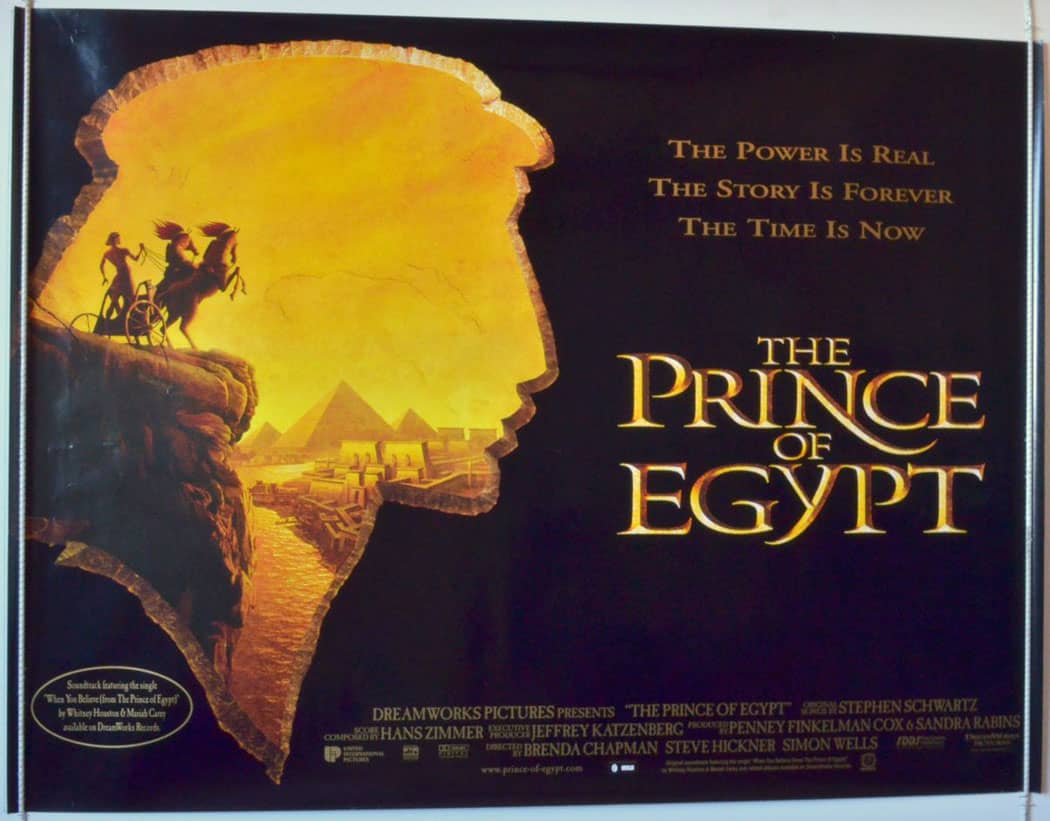 Movies With a Message: The Prince of Egypt

After nearly twenty years, The Prince of Egypt remains the best version of the Exodus story (yes, even better than the Charlton Heston one). This animated masterpiece, directed by Brenda Chapman, Steve Hickner and Simon Wells, is a visual feast, echoing the imagery of Lean and Spielberg. Never has this tale of supernatural deliverance from Egyptian slavery been more thrillingly rendered.

Even though the narrative is all but bulletproof, it can be messed up (the more recent dramatically flat Exodus: Gods and Kings for instance). But the masterstroke here was to take a bit of artistic licence and paint Moses and Rameses as close siblings whose relationship is torn apart by the events described in the Bible. This gives a tremendous dramatic core to the story, with genuine pathos.

The vocal cast – which includes Val Kilmer, Ralph Fiennes, Michelle Pfeiffer, Sandra Bullock, Jeff Goldblum, Helen Mirren, Martin Short, Steve Martin, Danny Glover and Patrick Stewart – are all excellent. In fact, The Prince of Egypt started something of a trend for using bigger names to voice animated films. Previously that had not always been the case, but here Val Kilmer delivers my all-time favourite take on the “Let my people go!” refrain.

Hans Zimmer’s music score and the various songs are all brilliant, and well integrated into the story. Obvious favourites include the show-stopping When You Believe, but I have a particular liking for You’re Playing with the Big Boys Now, a highly amusing number which occurs when Moses’s staff turns into a serpent and Rameses’s magicians attempt to replicate the feat with sorcery.

Then, of course, there are the astonishing visuals. In set-piece after brilliant set-piece, the well-known story feels as fresh as the first time you heard it. Baby Moses’s wicker basket river escapade opens the film, and other stand-out moments include the burning bush (featuring a voice of God you can actually take seriously) and an astonishing dream sequence drawn with clever 2D hieroglyphics retelling the massacre of Hebrew babies. Speaking of which, the film fully embraces the darker elements of the story. The plagues are rendered vividly and frighteningly, particularly the plague on the firstborn; a stark, near-monochrome sequence echoing the finale of Raiders of the Lost Ark.

Yet it is in the magnificent finale that The Prince of Egypt scales truly exhilarating heights. With God coming down from heaven in a pillar of fire, stopping the Egyptian army in their tracks, one has to wonder yet again at the sheer hubris of Rameses’s decision to then still follow Moses and the Israelites through the vast walls of the Red Sea. If I’d been in the Egyptian army, essentially confronted by God himself, I’d have discreetly turned my chariot around and gone the other way…

The Exodus story really is one of the most astonishingly spectacular and inherently cinematic of all Bible stories. It is impossible to come away from this film without a sense of awe, regardless of whether you are a believer or not.