BREAKING
US Voices Concerns Over West Bank Rise in Violence in 2022
“Once in a Lifetime” Ancient Burial Cave Discovered South of Tel Aviv
Five Texas Cows Arrive in Israel—Cause Stir of Speculation about End Times
Home Tags Posts tagged with "The Rock"
Tag: 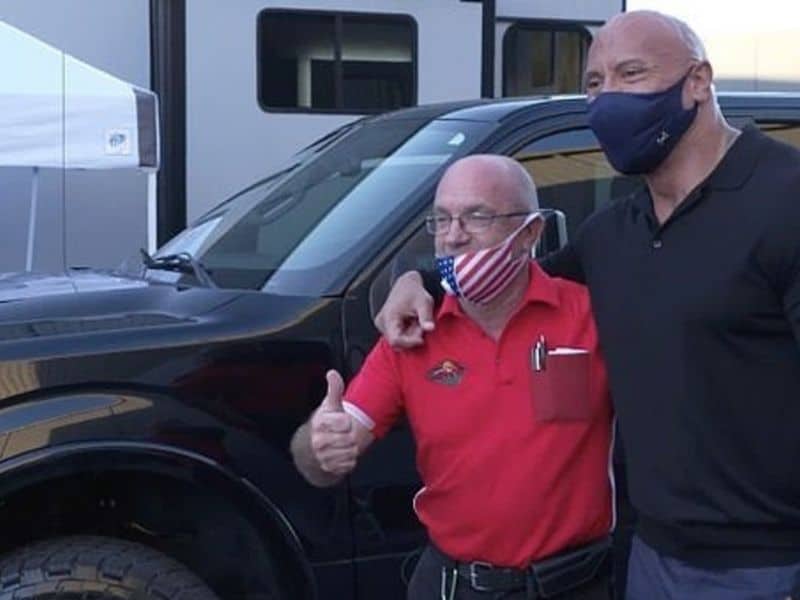 Dwayne Johnson gifted his old friend, Bruno, a brand new truck as a way of thanks for taking him in when he was a homeless teenager.

Dwayne or popularly known as “The Rock,” rose to fame as a wrestler in WWE. He then successfully transitioned into acting, receiving several hit projects along the way. But Dwayne’s popularity did not go to his head. He showed his humility when he looked back at his old times and remembered the friend who helped him out.

In his Instagram account, the Fast and Furious actor shared how Bruno’s “kindness and heart helped change his life’s trajectory.”

It started when Dwayne’s mother sent him off from Hawaii to Nashville to live with his dad. But, it turned out that his dad wasn’t there. Thankfully, Bruno came along. Dwayne explained that God “always found a way to put a few people in my path that would change the trajectory of the road I was going down.”

Bruno gave him a place to stay. “He could have said no but, he didn’t,” Dwayne recalled. “He took this punk kid in, and we became lifelong friends.”

Years later, when The Rock was still trying to make a name in the wrestling industry, he again found himself struggling for a shelter. Bruno did not fail. He shared his trailer with Dwayne.

Today, Dwayne expresses his gratitude by gifting his lifelong friend a brand new Ford Truck. He even promised Bruno that he would help him if he asked. He said, “When you’re ready to retire from ‘the business,’ you just say the word. I got you covered.”

Bruno was completely in tears upon receiving his gift. “Nobody’s ever done anything like this for me before,” he said. “I love you, man, not ’cause of this. ‘Cause of who you are. Thank You, Lord Jesus, for putting you in my life.”

The Rock Talks About Faith

Turns out even The Rock needs a solid rock on which to lean. Behind that tough exterior that we know and admire so much is Mr. Dwayne Johnson – a fallible human with a messy life, not so different from you and me.

Sure, Muscle & Fitness named Johnson the “Man of the Century,” Time declared him one of the top 100 most influential people, and last year he was the world’s highest-paid actor. But behind his larger-than-life persona, The Rock, Dwayne Johnson has his own set of struggles.

In a recent interview, Johnson revealed that the hardest part of his career has been that he doesn’t know what the future holds. While everyone faces anxieties about the future, these fears are likely compounded by fame. After all, when you have millions of people watching you with baited breath, waiting to praise or condemn your next career move, it takes all your strength to avoid paralysis and keep trucking onward.

You see, Dwayne’s career wasn’t laid out for him ahead of time. He forged his own trail. After winning a national football championship at the University of Miami in 1991, Johnson joined the Calgary Stampeders pro team in Canada. But he was thrown for a loop when he was cut from the team in 1995. Unsure of his next step, Johnson landed on professional wrestling.

This was actually a really good decision. Today, Johnson is considered by many to be the best professional wrestler of all time. An eight time WWF/WWE champion, Johnson’s success is unparalleled. No wonder he earned the nickname “The Rock.”

But wrestling is a physically-demanding sport, and even the best have to retire at some point. In 2002, Dwayne transitioned to Hollywood, earning his first leading role in The Scorpion King. Since then, he has appeared in many other movies, including The Fast and the Furious.

Looking back, Johnson’s success seems almost unreal. But it wasn’t always easy for him.

In the same interview, Johnson revealed that 5 or 6 years ago, he was at a low point. Uncertain and afraid, he turned to God. He relied on his faith and his family to sustain him.

When asked what he does to grow spiritually, Dwayne responded “I always have to have an hour to myself. Sometimes I think about donuts, or about what I’m doing tomorrow, and sometimes I don’t think at all.” In a fast-paced world, Dwayne cherishes quiet time, understanding that it is the best way to connect with God.

According to Dwayne, “I have my own special relationship with God. I feel very blessed. I count my blessings every day.” Although he was not forthcoming about the specifics of this relationship, it is clear that the 45-year-old has learned that all the fame and success in the world is empty without a divine connection.

It just goes to show that even those with the toughest of exteriors have an inner void that begs to be filled – and only by God.

Let’s continue to pray for Dwayne as he searches for God in deeper ways!