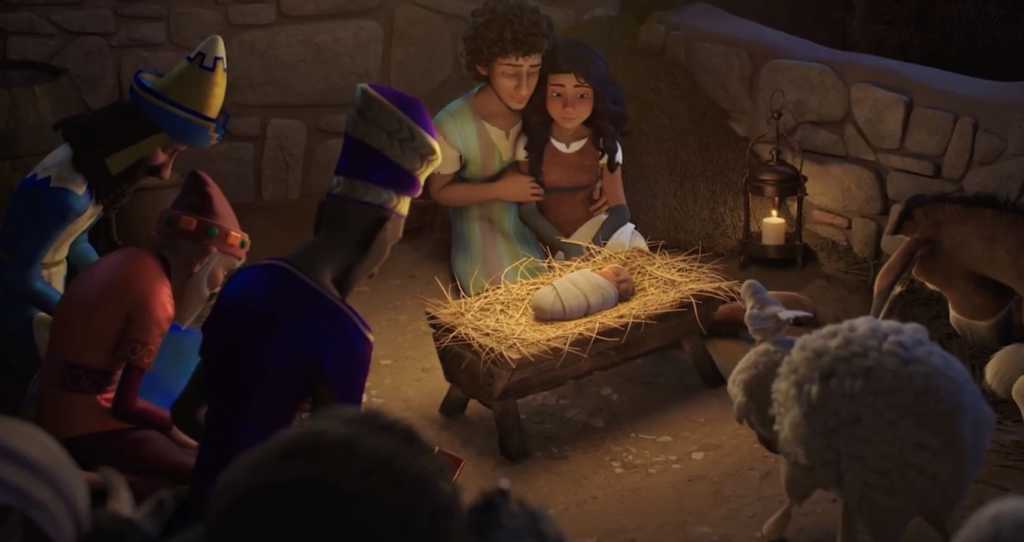 New Take on the Christmas Story

The Christmas Story? Animated? From the animals’ perspective? This holiday season, Hollywood is defying all expectations, offering up a whole new take on the Christmas Story. With a release date of November 10, “The Star” looks to be a captivating and hilariously entertaining movie with a message.

This week, Sony Pictures Animation released a teaser trailer for “The Star,” and it did not disappoint. This highly-anticipated film features Jesus’s birth from the perspective of the animals that witnessed it. This story-telling method might just spark new interest in – and, dare I say, faith in – the Son of God, as old and young alike re-encounter this well-known biblical story from an entirely new point of view.

The storyline revolves around Bo – a donkey who longs for a life beyond the mill. Fortunately, he escapes and follows a star in the sky to become an accidental hero in the birth of Jesus Christ. Through his eyes, you see the traditional nativity story – in a not-so-traditional way.

According to Executive producer DeVon Franklin, who also directed Miracles from Heaven, Bo’s unsettling feeling that there has to be something more – as well as his quest to find it – can be easily applied to viewers’ own lives. “We all have a destiny, a calling, or a purpose … [often] we don’t realize how it is all working towards it. That’s what’s kind of great about Bo’s journey,” Franklin commented.

Franklin hopes that the audience walks out of the theater feeling “hopeful” and “purposeful.” If a donkey named Bo can find his purpose, than so can they.

From Bible to Big Screen

Director Tim Reckart admits that adapting a Biblical story to the big screen was not an easy undertaking. “We wanted to be as good as the field is. The difficulty in dealing with a scriptural thing is finding a way to get a solid three-act structure, an emotional through line, and comedy and adventure that may not necessarily be there in the Biblical story, without tampering with the Biblical story.”

It is comforting that Reckart strove to maintain the structural integrity of Jesus’s birth story. Indeed, the movie includes well-known elements of the Christmas story, such as the census, Joseph’s initial hesitation, and the wisemen. Franklin added, “‘The Star’ captures the genesis of the Christmas season .. and so much of our faith.”

When asked what obstacles he faced when creating a faith-based film in secular Hollywood, Franklin responded, “You’ve just got to be clear of intention about what you’re really aspiring to do and own that. I think that Hollywood is, to a degree, democratic. At the end of the day, it’s an industry.”

And as an industry, Hollywood wants rave reviews. Franklin believes these are just around the corner for “The Star,” which features big names like Oprah Winfrey, Kelly Clarkson, Tyler Perry, and Tracy Morgan.

With high hopes for the movie, Franklin promised: “The entire family will laugh and be inspired as they experience the power of faith, friends, and courage through the eyes of these brave, heroic animals.” He added, “Having the animals involved gives you some space to infuse creativity.”

This Christmas season, perhaps what our wary and disgruntled culture needs most of all is a refreshing and creative take on this often-told story.

Perhaps “The Star” will point children and parents alike to the one true star – Jesus Christ.

Watch the Trailer: The Case for Christ! We Can’t Wait to See This Movie!

New Movie Coming to Theatres THIS WEEK: The Case for Christ

If you’re a journalist, being a legal editor for the Chicago Tribune is the epitome of success in the secular world. Lee Strobel achieved this success, yet there was still a hollowness—an emptiness. That’s how the Case for Christ began.

So what was he to do when his wife Leslie became a Christian and passionately proclaimed the good news? The same thing he had always done: use his investigative journalism prowess to uncover the truth. Little did he know that his wife had just handed him the most sensational story of his life.

The Case for Christ, premiering in theatres nationwide on April 7, presents the true story of self-proclaimed atheist Lee Strobel (played by Mike Vogel) and his quest to challenge the historical validity of the crucifixion and resurrection of Christ—the foundation of Christianity. After all, if the resurrection is a farce, Christianity is a “house of cards.”

Questions to challenge you

The movie’s compelling trailer advances many point-blank questions common to skeptics and believers alike, such as:

If you are not hooked yet, consider this: the hard-nosed Lee Strobel is now an evangelistic Christian. In this movie, which closely parallels Strobel’s book of the same name, you get up close and personal with Strobel as you watch his journey from atheism to faith unfold.

What could cause such a transformation?

After all, intellectuals, academicians, and journalists tend to be dogged in their beliefs (or lack thereof) because they stake their professional reputations on their beliefs.

Only the power and truth of the resurrection could crack such a tough outer shell. Strobel uncovers historical evidence of the empty tomb, and his shell does indeed crack. In the trailer, Strobel declares, “[My journey to faith] changed me forever.”

His proclamation mirrors his wife’s earlier in the movie: “What I felt is something more real than anything I have ever felt in my whole life.” New Christians will no doubt identify with this sentiment. But what about those who are further along in their spiritual journey? It is too easy to become complacent.

Far from complacent, Strobel actively speaks and writes about his faith still today—over 35 years after his conversion. His passionate faith, as well as his journey from resolute atheism to profound belief, has influenced millions—and likely many more after the release of this movie.

You can’t help but compare Strobel’s modern journey to faith to the Apostle Paul’s ancient journey. Both Paul and Strobel were once fervently anti-Christian until they discovered truth. This profound transformation gave them credibility with both Christians and anti-Christians, enhancing their ability to influence others for Christ.

In 1 Corinthians 15:9-10, Paul remarks, “For I am the least of the apostles, unworthy to be called an apostle, because I persecuted the church of God. But by the grace of God I am what I am, and his grace toward me was not in vain…”

God used Paul and Strobel’s atheism to substantially further His kingdom. No doubt He will use the premier of The Case for Christianity to do more of the same. Whether you are a Christian or an atheist, this action-packed adventure will leave you thinking. The best part? It’s not fiction; it’s true!