BREAKING
Israel-led Team Solves Mystery Why Lightning Strikes Fewer Times Over The Ocean...
Tourism In The Holy Land Is Soaring Back Up To Pre-Pandemic Highs
Lapid Speaks Directly To Palestinians—Offers Them “Another Way” Out Of The Ongoing...
Home Tags Posts tagged with "travelling alone"
Tag: 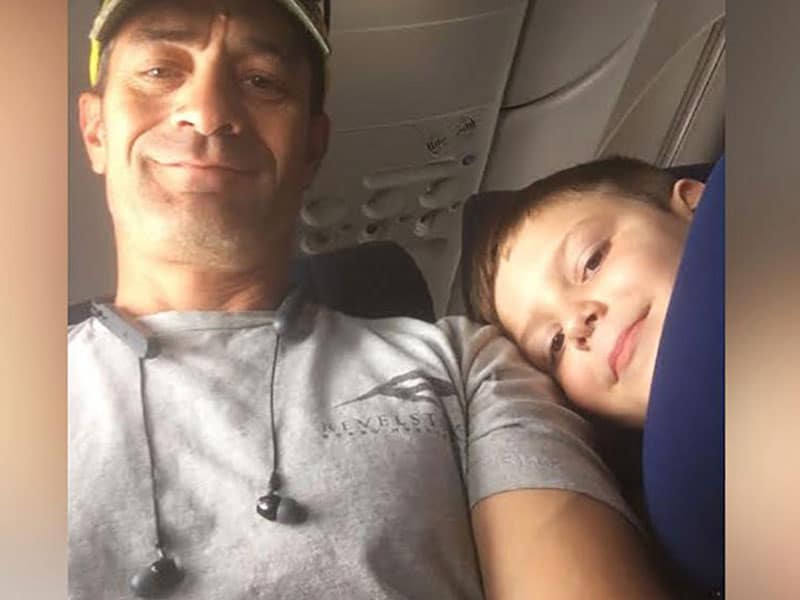 A boy with autism had to travel alone to see his dad. His mom was worried until a kind stranger sat next to him on the plane made the flight extra special for her little boy.

This story went viral three years ago continues to bless many people today.

Alexa Bjornson’s son, Landon, went to see his dad in Oregon. His mom could not go with him. Thus, he had to travel alone from Las Vegas to his dad’s place. For that reason, she was worried about her son’s safety and security as he has autism. 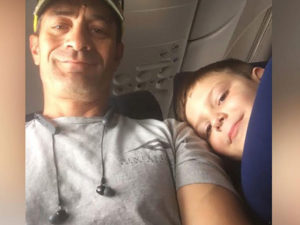 So, Alexa resorted to a plan of leaving Landon a note with a ten-dollar bill to give to a stranger passenger who would be sitting beside him. In the note, she wrote about her son’s high-functioning autism condition. She also gave a heads up that her son would often ask, “Are we there yet?” Then the mother included a ten-dollar bill for the person who would kindly take care of a 7-year-old.

“I thought, how do I make it so whoever’s sitting next to him won’t look at him as a burden,” Alexa said. “But more of like, I can help this kiddo get through the day.”

Soon, the 7-year-old was on the flight and sat beside another passenger, Ben Pedraza. And surprisingly, he went the extra mile to take care of Landon.

“We were cracking jokes, and after a while, he asked me to quit making dad jokes,” Ben recalled. 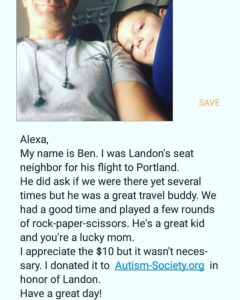 Both had a great time together on the flight and even took a selfie together. The passenger sent it to Landon’s mom and said, “(Landon) did ask if we were there yet several times but he was a great travel buddy. We had a good time and played a few rounds of rock-paper-scissors.”

Then he remarked, “He’s a great kid and you’re a lucky mom.”

Ben accepted the ten-dollar but donated it to The Autism Society. He wanted to honor the 7-year-old with autism who spent an enjoyable time with him on the plane.

Praise God for Ben’s kindness! He represented the love of Christ well.