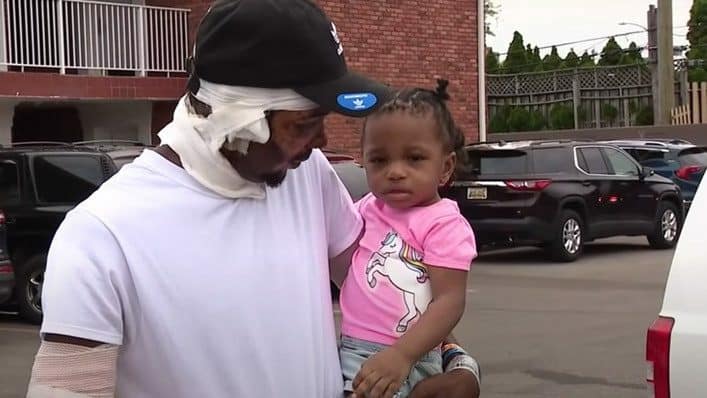 A Michigan father ended up in the ICU due to extensive burns after he saved his twin babies from a burning building.

Ray Lucas from Eastpointe, Michigan is being hailed as a hero for risking his own life to save his twin babies. On July 17, 2021, Lucas and his partner, Shi’Ann went to their local market to buy some milk. Their twin babies, Malaysia and Milan, were left sleeping in the basement of their home under the care of their grandma.

When they returned home, they found their home burning in flames. They found Lucas’ mother outside the burning building panicking because the twin babies were still inside the building. Without having any second thoughts, Ray rushed into the fire to save his children.

“I was speechless. The action took over me. I ran into the house to get my babies. I’m looking at it as a father. I did anything that any other father would do or should do.”

The flames and the smoke inside the house were too thick that Ray couldn’t see anything. He went straight into the basement using only his memory of the building’s structure. When he finally saw his twin babies, he was so relieved to see that they were conscious and responsive to him.

Ray grabbed the 18-month-old babies and rushed outside the building engulfed in flames. When he has ensured his babies’ safety, he again rushed inside the building to save his niece. He was unable to see where she was so he went back outside. There he saw his niece in a window on the second story of the building. He yelled for her to jump out with his arms wide open to catch her.

Ray and his twin babies were then rushed to the hospital because of severe burns. He was admitted to the ICU and the babies were brought to Children’s Hospital of Michigan in Detriot. They all suffered from second and third-degree burns.

The entire family was able to survive the fire thanks to his selfless act. The twins’ mother posted on Facebook to ask God for help and to thank Ray for his heroic deed. A GoFundMe campaign was also made by their community to help Ray’s family get back up on their feet again.

Read also: MIRACULOUSLY NO ONE GOT SEVERELY HURT WHEN 18-WHEELER CRASHED INTO FIRETRUCK