BREAKING
Israel-led Team Solves Mystery Why Lightning Strikes Fewer Times Over The Ocean...
Tourism In The Holy Land Is Soaring Back Up To Pre-Pandemic Highs
Lapid Speaks Directly To Palestinians—Offers Them “Another Way” Out Of The Ongoing...
Home Tags Posts tagged with "Tyler Perry"
Tag: 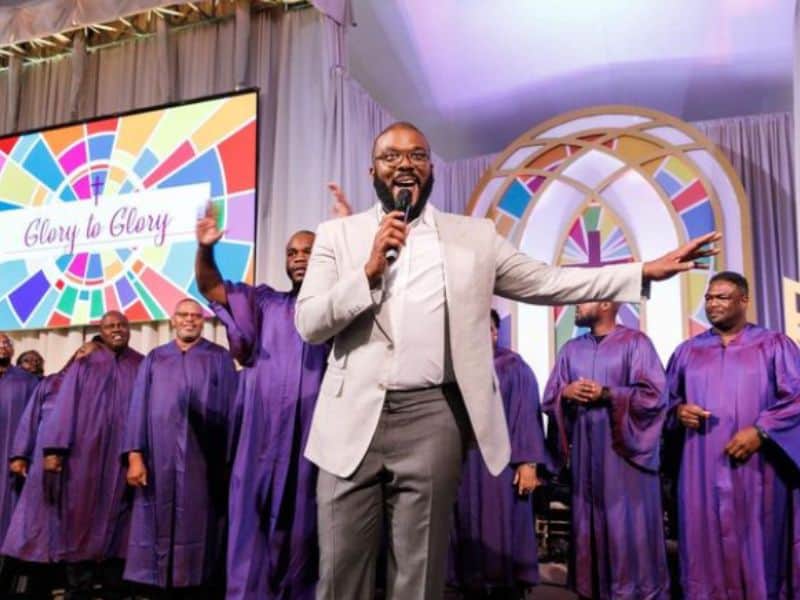 Actor and famous producer Tyler Perry confessed that he buried bibles underneath his 330-acre film studio because of its dark past.

The film mogul made history as he became the first black American to own the land.

In an interview with AARP, Tyler revealed that when he purchased the property in Atlanta, Georgia, he felt disturbed in the spirit. He said, “From the moment I walked onto the property, I was haunted by it.”

“The land itself was once a Confederate Army base, which meant there were people here fighting to keep my ancestors enslaved,” he added.

So, he decided to make God’s Word the place’s strong foundation. “As we built each of the 12 soundstages, we buried Bibles underneath them as a way of refocusing the spirit of the place,” he said.

Since then, the studio has launched hundreds of TV shows and films, mainly featuring the experiences of his fellow black people.

Moreover, the Tyler Perry Studios have provided jobs to the marginalized. He shared, “Thousands of people come through the gate every day to work here. And it’s a beautiful thing. A lot of them are former prisoners who wouldn’t have had this shot.”

The outspoken Christian filmmaker did not only share job opportunities but also used his platform to spread the Gospel. In fact, during the grand opening of the studio, he hosted a church service and gospel brunch.

To this, Tyler glorifies God. He expressed his praise to God on his Instagram page. “Glory to Glory – Couldn’t close the weekend without Jesus meeting us on the lawn at the studio!! Having a full heart and a thankful soul to all that have prayed me all the way here.”

May more Christians invade the movie industry and bring glory to God! 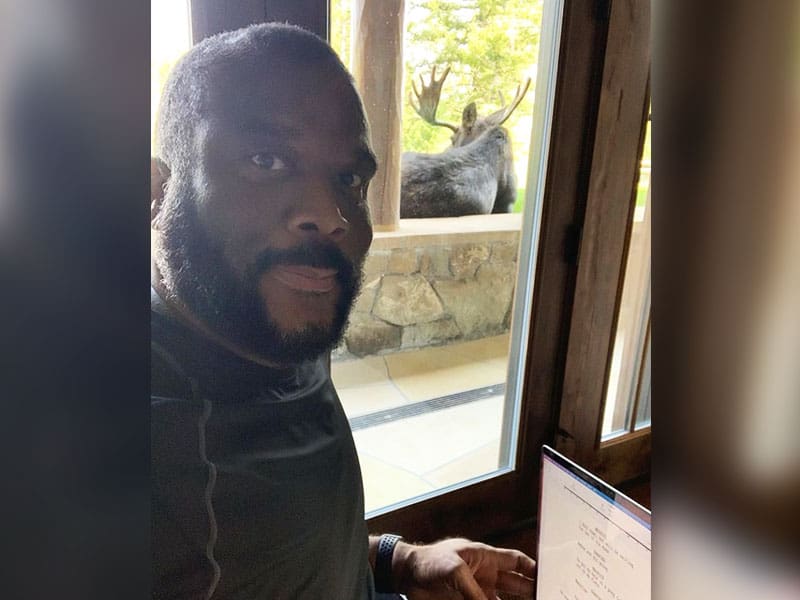 Tyler Perry boldly shared about his faith in God with Steve Harvey on the“Steve TV Show” and shares the impact of his mother in his life.

Actor Tyler Perry is one of the few Hollywood celebrities who are outspoken about their Christian faith to the public. As he releases his new book entitled “Higher Is Waiting,” he stresses about the importance of his faith in Jesus Christ at Steve Harvey’s show. 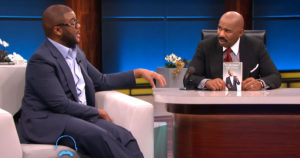 During the show, Tyler responds to Steve’s question about the reason why prayer is very important to him. That’s when the actor revealed how his mother and grandmother greatly played a huge role about his attitude toward prayer.

Apparently, Tyler grew up in a Christian home where his mom taught him about God. And today, the actor is thankful that his faith in Jesus became the foundation of his life. He says he owed it to his mom and grandmother. 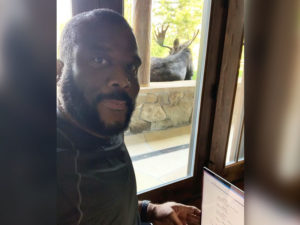 Further, Tyler also shared about praying an impossible prayer which God answered when he was a little boy. Since then, he believed God would do everything he asked of Him.

Tyler also explained why he used trees as an analogy in writing his new book. He revealed how “trees” have always been his inspiration for lessons of faith and hope.

Watch the faith-filled entire conversation of Tyler Perry and Steve Harvey and be blessed!

Tyler Perry Talks Faith & His Relationship With His Mother 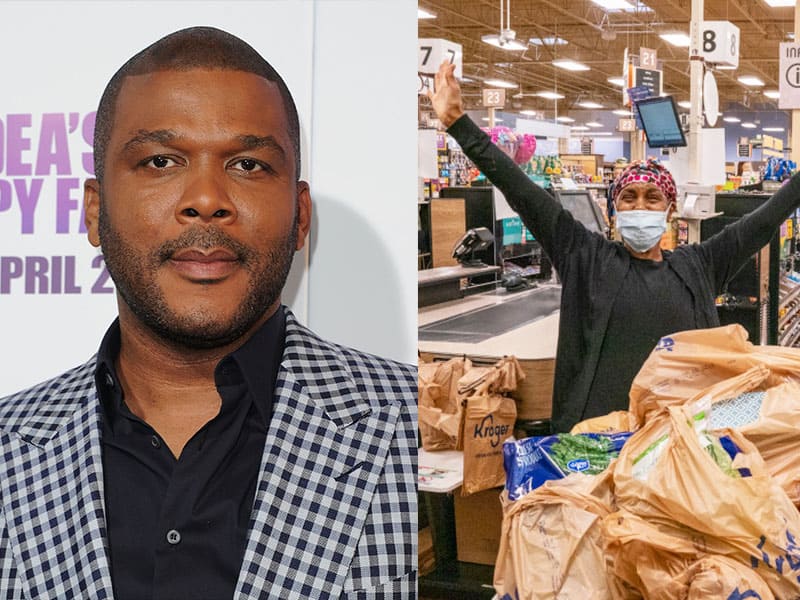 In light of the unlikely phenomenon overwhelming the world today, a number of citizens still keep on spreading hope and kindness to people. And this is what the well-known actor and comedian Tyler Perry exactly did for seniors and high-risk shoppers amid the coronavirus pandemic.

Senior citizen shoppers and others who are high-risk to coronavirus received an incredible surprise Wednesday morning. The shoppers became stunned and ecstatic when they found out that their groceries were already paid in full. Some of them responded in tears of joy because of the heartwarming surprise. 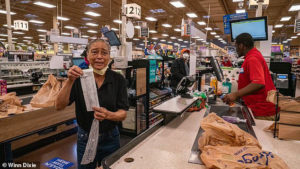 According to Mail Online, “many store across the United States are opening early exclusively for elderly shoppers.” These shoppers are susceptible to the COVID-19 virus.

Apparently, the Tyler Perry offered to pay for the groceries of elderlies and others who are most vulnerable to COVID-19. According to PEOPLE, he put forward this generosity to 44 Kroger stores across Georgia Wednesday morning. Also, to 29 Winn Dixie stores in New Orleans.

Kroger confirmed as well that it was indeed the 50-year-old actor who extended the immense generosity.

‘He wanted to do something special to provide immediate relief for some of the most vulnerable in the two cities he considers home,’ a source told Mail Online of the actor’s act of kindness. 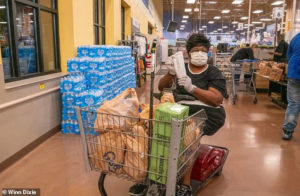 Felix B. Turner, a Kroger corporate affairs manager, stated in an email to 11Alive, “Senior and higher-risk Kroger shoppers in metro Atlanta did receive a nice surprise at the register this morning when they learned Tyler Perry had paid their grocery tab in full.”

Then the manager thanked the actor, “We would like to join our customers in thanking Mr. Perry for his kindness and generosity during this unprecedented pandemic. It was truly a pleasure to see our customers fill with joy and gratitude. As the news spread throughout 44 stores across metro Atlanta.”

This isn’t actually the first time Tyler shared his blessings. On Sunday this week as well, he left a $500 tip for each of the 42 out-of-work servers at a restaurant. He did this while picking up his takeout order, TMZ reported.

The A Fall from Grace director is a Christian. And his faith has always been a part of his work, according to Beliefnet.

“I’m not afraid to have a character say, ‘I am a Christian,’ or ‘I believe in God,” he told Beliefnet. “Because I think they represent real people on this earth.”