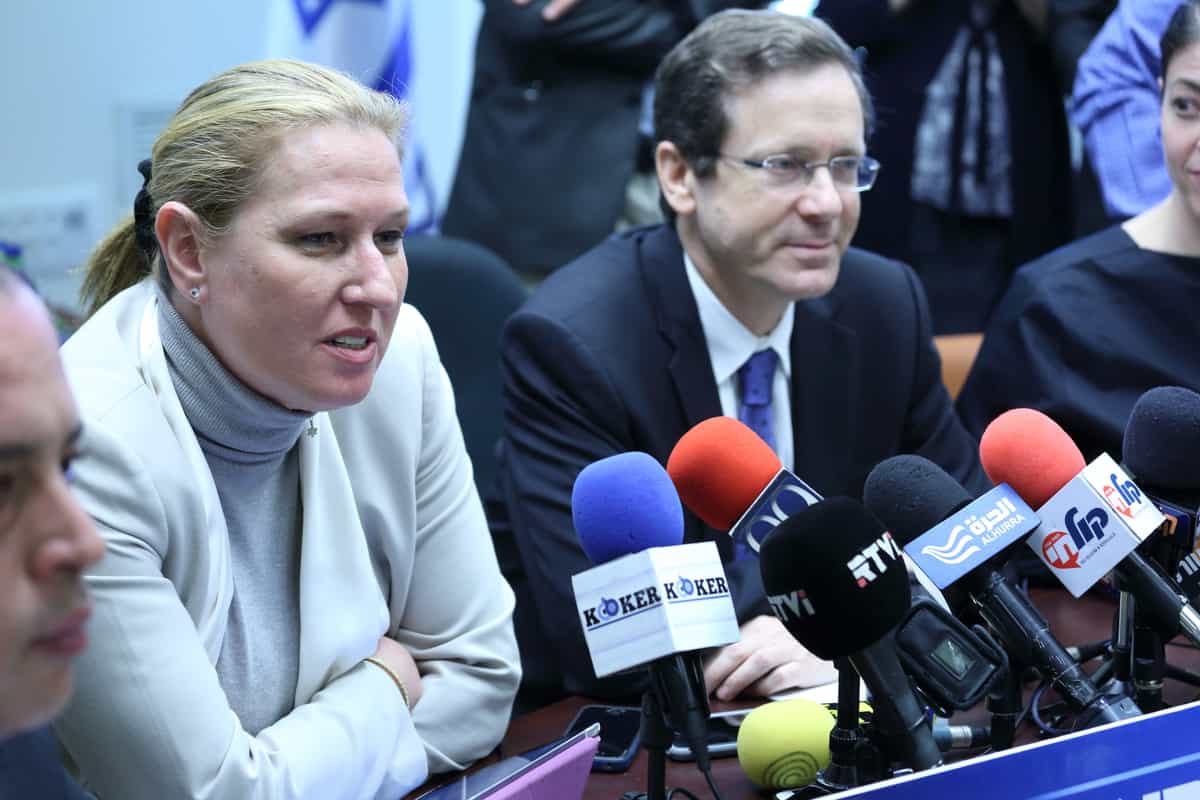 Speaking at the first Zionist Union party meeting at the Knesset since Herzog was chosen to become head of the Jewish Agency, Livni said “the job of head of the opposition is a critical one for the continued partnership of the Zionist Union, which is comprised of the Labor Party and Hatnua.”

Earlier in the day, Herzog told the Israel Broadcast Corporation (Kan) that he would recommend Livni to replace him as leader of the parliamentary opposition, despite reservations by Avi Gabbay, who is the chairman of the Labor Party but is not a member of the Knesset.

In 2015 Herzog, then the chairman of the Labor Party, agreed to join forces with Livni’s Hatnua faction to create the Zionist Union party. He told the Hebrew-language Israel Broadcast Corporation (Kan) Monday that the deal to join forces included an agreement to bequeath the role of opposition leader to Livni, who served as foreign minister from 2006-09 and justice minister from 2013-14, in the event that Herzog did not complete his term.

“I was voted out (of the party leadership) – deposed, if you like, however you want to put it.  The Zionist Union has two terrific leaders, Avi Gabbay and Tzipi Livni. I’m currently the head of the opposition but I’m not the head of our political camp.

While throwing his support behind Livni to replace him as opposition leader, Herzog said that Labor Party Chairman Avi Gabbay was correct to think carefully if and how the future partnership between the Labor Party and Hatnua will progress. “Naturally, he wants to think about the future of the partnership between the parties and to make sure that this is not just a platform for Hatnua.

“I’ve got till the end of July until I resign from the Knesset. By that time, I am sure we will find the right conditions (to solve this issue),” he said.

Herzog also told the national broadcaster that he would put improving relations between Israel and Diaspora Jewish communities and streamlining the process of accepting conversions performed outside Israel as a central focus of his tenure at the head of the Jewish Agency, quoting the Biblical story of Ruth the Moabite to illustrate Judaism’s welcoming attitude towards converts.

However, Herzog – the grandson of Israel’s first Ashkenazi Chief Rabbi Yitzhak Isaac Halevi Herzog – misquoted the relevant verse, omitting Ruth’s pledge that “your God will be my God,” and replacing it with the words “your homeland will be my homeland,” which does not appear in the original text. It was not clear if the change was intentional or not.

Despite the misquote, however, non-Orthodox leaders praised Herzog’s election and welcomed the Agency’s stab at Prime Minister Binyamin Netanyahu, who the non-Orthodox leaders say has consistently refused to address their concerns out of political expediency to maintain government peace with his ultra-Orthodox coalition partners.

“Yes, this is a clear statement to the prime minister,” said Rabbi Josh Weinberg, President of ARZA, the Association of Reform Zionists of America. “It isn’t just the kotel (Western Wall). Bibi hasn’t implemented any of the agreements we’ve made with him on freedom of religion, conversion, mikvaot (ritual baths).”

“But (in Herzog) we’ve got a leader who has truly been a partner on all the issues that are important to us:  Religion and state, pluralism, religious freedom, Jewish identity.

“He is eminently qualified for the position and will be a terrific representative of the Jewish people,” Weinberg said.