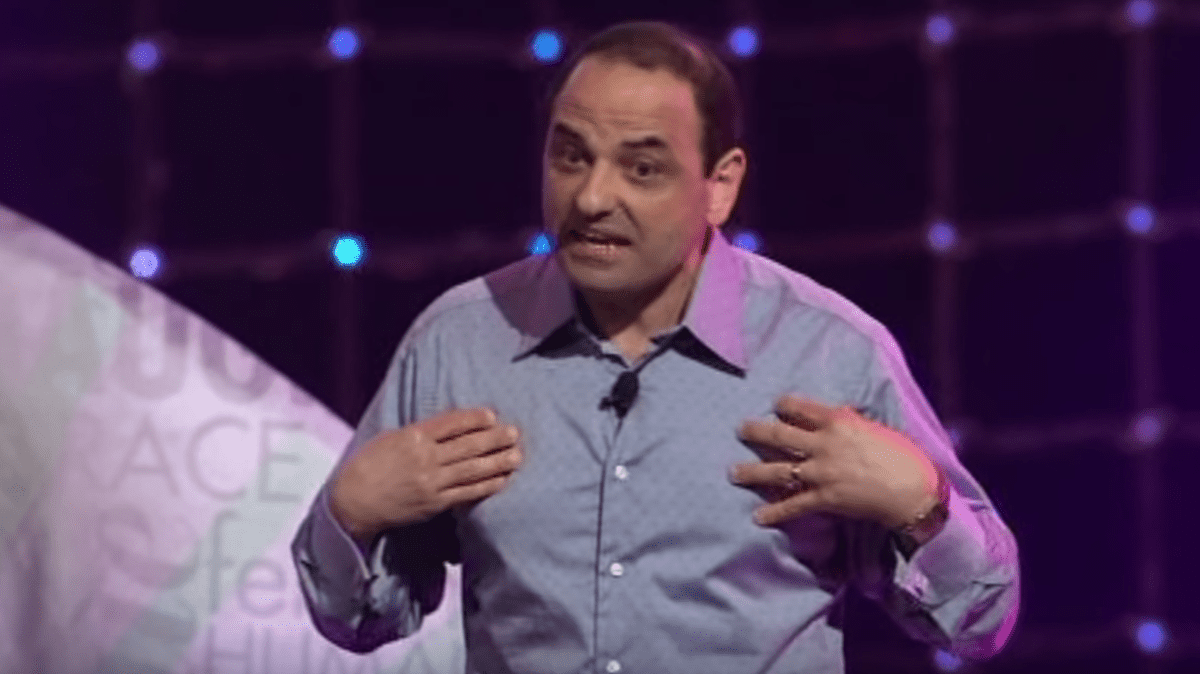 WATCH J. John: The Dog that Walked on Water – Are We Missing the Savior Because of the Flawed Disciples?

J. John: Are We Missing the Savior Because of the Flawed Disciples?

There once was a man who journeyed to the lake with his dog. To give his rambunctious companion some exercise, he threw a tennis ball into the lake. His furry friend ventured out into the lake and retrieved the ball, but the man was stunned. The dog had walked on the water. He wasn’t even wet! The man shook his head, resolved that he was going insane.

The next day he brought his neighbor to the lake to witness the miracle (and to make sure he wasn’t crazy). He threw the ball, and the eager dog retrieved it – sure enough, by walking on the water. “Did you notice anything strange about my dog?” the man asked, hesitantly. “Why, yes!” the neighbor replied, “You’re dog doesn’t know how to swim!”

Or so goes the story according to J. John. In a recent sermon in front of a humongous audience, the U.K. evangelist followed Jesus’s example by teaching through a parable. After he told the parable of the dog, he admitted to the audience that he was the neighbor. For years, he had been an agnostic (Latin: ignoramus), questioning the existence of God. He had missed the miracles because he was too busy dithering over the meaningless details.

J. John says his understanding of Christianity was a misunderstanding – as is all too common throughout the world today.

Missing the Savior for the flawed disciples

Too often, people become alienated from the Christian church because of a certain “weird” ritual, an uncomfortable sermon, or a judgmental parishioner. Although this alienation is understandable, it is based on a faulty conception of the heart of Christianity.

First of all, you must understand that whenever flawed humans get involved things get a little messy. The church is an institution run by humans, so it is inherently flawed. Even though it does good in the world, it has also done some bad. Christians and non-Christians alike can and should admit this sad fact.

People who become alienated from Christianity are likely basing their decision on the actions of flawed humans. They may not have experienced the earth-shattering power of God’s love and grace, because that bright, mesmerizing light is almost impossible to turn away from. They miss the forest for the trees, the Savior for His flawed disciples.

The visible church is a flawed vessel for the message of God. We must acknowledge that, and at the same time, do all we can to make it a loving, welcoming place for all who desire to seek a personal relationship with Christ.

Modern-day agnostics, atheists, and anti-Christians are not the first to miss the forest for the trees. Law-abiding Pharisees, or prominent Jewish leaders, who interacted with Jesus did too. As they were busy cleansing, purifying, sacrificing, and abstaining, Jesus was busy ministering, sharing, healing, listening, and ultimately saving.

Jesus even called out the Pharisees for performing empty rituals and leading others astray: “But woe to you, scribes and Pharisees, hypocrites! For you shut the kingdom of heaven in people’s faces. For you neither enter yourselves nor allow those who would enter to go in” (Matthew 23:13).

There was our Savior walking on water right in front of them and they were, metaphorically speaking, criticizing him for not swimming!

Creating Our Own Savior

We all have different conceptions of how a savior should or shouldn’t be, what Jesus did or didn’t do, and ultimately, how the church should or shouldn’t be. It is an artifact of our me-centered, consumeristic society. We wish to consume church and Christianity for our own benefit instead of as an avenue to worship our Lord and Savior. (Hence, the term “church shopping.”)

But in the end, our own conceptions detract from the Truth, which is clearly and explicitly written in the Scriptures: “For God so loved the world, that he gave His only Son, that whoever believes in Him should not perish but have eternal life.” God made a provision for us – Jesus – to save us from our own sin.

Because we have a Redeemer who walked on the water, we are able to have a personal relationship with our Lord. While the human version of Christianity (the church) is, at times, flawed, Christianity is the only avenue to redemption, as no other religion features a redeemer. Our Redeemer – Jesus – is the bedrock of all hope, peace, and love.

Is your understanding of Christianity based on a misunderstanding – like J. John’s was? As Jesus walks on the water, do you question why He isn’t swimming?

Welcome back to the heart of Christianity – an unfathomable, intimate relationship with our loving Father.