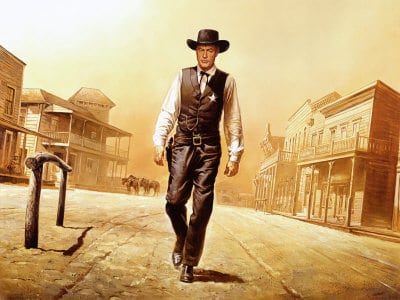 I love westerns, and High Noon could possibly be my absolute favourite. More than any genre they represent America’s outstanding contribution to world cinema, for all kinds of reasons I won’t bore you with here. Instead I shall simply wax lyrical about why I think High Noon remains a masterpiece, and why I think it has an interesting spiritual message.

In a recent blog post I touched on how On the Waterfront was interpreted by some as an apology for McCarthyism. By contrast, High Noon is an allegorical condemnation of it, and a very courageous film for screenwriter Carl Foreman and director Fred Zinnemann to have made at the time. But make it they did, and it proved a huge success, despite being hated by John Wayne, who claimed the contemptuous way Gary Cooper threw down his tin star in the finale was one of the most un-American things he had ever seen.

Cooper plays lawman Will Kane, who just after marrying his pacifist Quaker bride Amy (Grace Kelly) is told that a man he sent to prison years before, Frank Miller (Ian McDonald) is returning on the noon train with vengeance on his mind. Initially Will decides to flee, but then he decides he has to go back and face Miller or he’ll spend the rest of his life looking over his shoulder. However, when he returns to town, the people who he has protected for so long turn their backs on him, one after the other. As the clock ticks down to the arrival of the train, it appears Kane may have to face Miller and his gang alone.

Shot in beautiful monochrome, the running time of this hugely suspenseful film coincides precisely with the time covered in the story, as minutes and seconds ebb away to the arrival of Miller. A superbly tense shootout is inevitable, but what makes High Noon remarkable is the cowardly way the townsfolk abandon Kane. The parallels to McCarthyism are clear, but on a spiritual level I find High Noon to have an even more interesting message.

Had the townsfolk stood as one to resist Miller and his gang, they would have had an easy victory. As the Bible says, one can put a thousand to flight and two can put ten thousand to flight. Yet instead the people give in to fear and intimidation, which brings division and ultimately shame. John Wayne was wrong. The casting down of the tin star was not un-American. It was, rather a condemnation of the cowardice displayed by friends and neighbours turning their backs on one another when the going gets tough. It can be applied to McCarthyism, but sadly sometimes it can also be applied to Christians.