Across The Nation And Around The World, We’re All Singing A New Song!

They’ve encouraged all of us for many generations, and have helped raise up more ministering artists for generations to come. Meet “NewSong,” the artists behind the Winter Jam Tour Spectacular, making an impact on this nation, and the many nations of the world!

NewSong’s “I Am A Christian” is an anthem for us all, and one that speaks the truth as to why we are each here, in not only fulfilling our own individual purpose; but, in the completion of our call, as a Body of Christ.

“We believe that it’s so beautiful when thousands of people come together in community to worship one name, Jesus,” says NewSong in a post shared earlier this year on social media.

NewSong is a contemporary Christian music group that was founded in 1981 at Morningside Baptist Church in Valdosta, Georgia. They’ve had twelve GMA Dove Award nominations, as well as one Grammy Award Nomination. They are the founders of the Winter Jam Tour Spectacular, the United States’ largest annual Christian music tour. 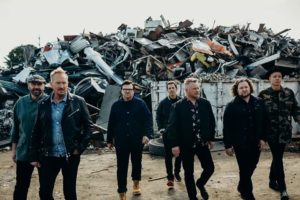 I had the privilege of meeting one of NewSong’s founding members, Eddie Carswell, at the Winter Jam (Tampa, FL) event in January of 2016. One year prior, One Jam Nation had aired its first program on WTIS, having celebrated its one-year anniversary that previous fall.

The same year, we also had the privilege of meeting Russ Lee on air, having Eddie on air in February (the following year), celebrating the Winter Jam tour through the spring.

“The heartbeat of Winter Jam is the gospel of Jesus Christ! We can’t put into words how much we love this tour and its purpose,” explains Russ Lee.

Winter Jam has featured a vast and diverse range of big-name bands such as for King & Country, TobyMac, Newsboys, Third Day, MercyMe, Skillet, Disciple, Audio Adrenaline, and Lecrae, and has helped expose and popularize many artists, such as Hawk Nelson, We Are Messengers, and more.

For the last five years, I have personally watched these gentlemen on stage, celebrating many concert events, tours, and new releases. I’ve come to have a great admiration for them, and recognize their remarkable talents and extraordinary influence on the Christian Entertainment Industry, as a whole. I love what NewSong is doing in training up new music missionaries (through the Winter Jam Tour Spectacular), and in honoring the Lord through this “joy and music” (Psalm 95:1).

NewSong’s “Greatest Hits LIVE Tour,” is very near and dear to my heart, and much of the heartbeat of ONE JAM NATION Radio in celebrating the Lord through some of the greatest hits in Christian Music’s history, through our daily playlist and programs like Jesus Music Flashback, having aired on Saturdays at 1pm (US/ET).

We are excited to follow and celebrate NewSong as artists, as well as these faithful servants of the Lord, as they do continue to make an impact on this nation, and the many nations of the world, through this powerful music ministry.

To get tickets, and learn more about NewSong, please visit their website at www.newsongonline.com, and be sure to plan ahead for the largest annual Christian music tour in history, arriving again this January.