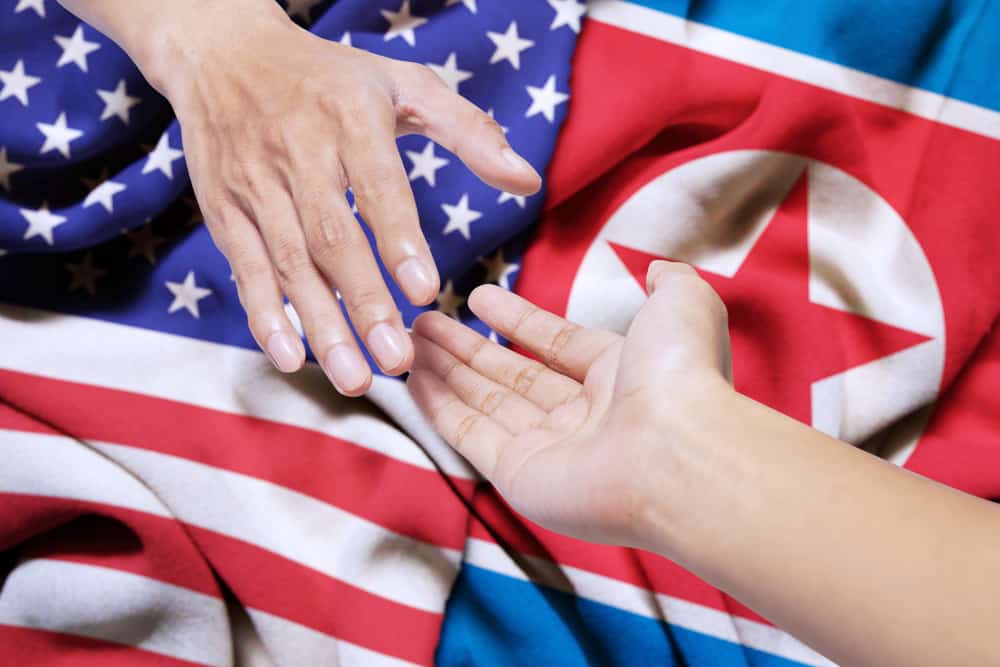 An all out war in the Korean Peninsula has been touch and go these past months, but thankfully it looks like peace is a very real possibility. There may be many reasons for this, however we can be sure of one thing: God has heard the prayers of millions of Koreans praying for their region, as have Christians worldwide. And, in what many may see as an unlikely turn of events, it seems US President Donald Trump’s ‘peace with strength’ initiative may have helped turn the situation around.

It wasn’t long ago that North Korean leader, Kim Jong Un was testing missiles in the South China Sea, creating a global crisis. Japan voiced grave concerns over its safety as did the US territory of Guam which North Korea threatened to “wipe it out”. Insults were traded between President Trump and Kim Jong Un – the words ‘dotard’ and ‘rocket man’ spring to mind. We can smile about this now, but for a season it looked like full-scale war was unavoidable.

It’s seems America’s firm stand against North Korea and President Trumps refusal to back down has proved to be successful. Donald Trump threatened Kim Jong Un, time and time again, stetting that “all options are on the table” including military intervention.  The US Ambassador to the United Nations Nikki Haley also deserves credit for speaking forthrightly at the UN. “If war comes, the North Korean regime will be utterly destroyed,” she warned. “The US will never accept a nuclear North Korea.”

Fast foward to the 2018 Winter Olympics in PyeongChang and North Korea decided to send a delegation at the last minute. This appeared to be the start in a thaw in hostility and just last week Kim Jong Un and South Korean President Moon Jae-in had a historic meeting on the border between the two nations. The result was the signing of the “Panmunjom Declaration for Peace, Prosperity and Unification of the Korean Peninsula.”

This now lays the foundation for talks between the USA and North Korea on a wider peace accord.

This is a miracle. Looking at the picture of the two men above, one wouldn’t think there ever was a problem between North and South Korea. But that would be the furtherest thing from the truth. The horrors of the Korean War are well documented and the news media is full of reports of the huge challenges that still lie ahead, but there is hope. It seems North Korea is ready to emerge from international isolation and that there is a brighter future for Asia.

What the world’s media will not tell you is that Christians both in and outside of Korea have been praying for this breakthrough for many years and we cannot underestimate the power of prayer to turn even the most impossible situations around.

Koreans are praying for North Korea

Did you know that the world’s largest church is found in South Korea? An Assemblies of God affiliate, Yoido Full Gospel Church has some 480-million members and one of their key missions to pray for North Korea. It was founded by David Yonggi Cho in 1958 and is now led by Young Hoon Lee. Many of its members have been separated from their friends and family in the north and their dream is for them to be reunited.

The church hosts overnight prayer meetings in it massive auditorium each Friday and furthermore it has a mass prayer site just miles away from the North Korean border. Known as the Osanri Prayer Mountain, thousands gather there to pray throughout the day. The facility can accommodate 20,000 people and the prayers of God’s people can be heard petitioning Heaven. Their prayers have not gone unheard.

Many Christian missions organisations throughout the globe have led passionate prayer initiatives for North Korea. There include our friends at the Barnabas Fund, who reach out to the Persecuted Church, and they have been interceding for North Korea for Years.

“North Korea is consistently ranked as the most dangerous country in the world to be a Christian,” they have revealed, giving a bleak overview of the situation facing our brothers and sisters in this nation. Read more at Barnabas Fund – North Korea. We pray this hope of peace will quickly change this.

In addition, Open Doors provides 5 Bible Verses We Should Pray for North Korea and Back to Jerusalem shares How to Pray for North Korea. Let’s continue to intercede for the region and believe that it will be completely transformed as God opens up North Korea to the Gospel. This is GOD TV’s great hope and the heart’s cry of many, many Christians worldwide.

We believe God is working behind the scenes and hope this new peace treaty is the start of a new day for the proclamation of the Gospel. Join us in praying for Korea, both North and South, and for the Gospel to go out like never before.