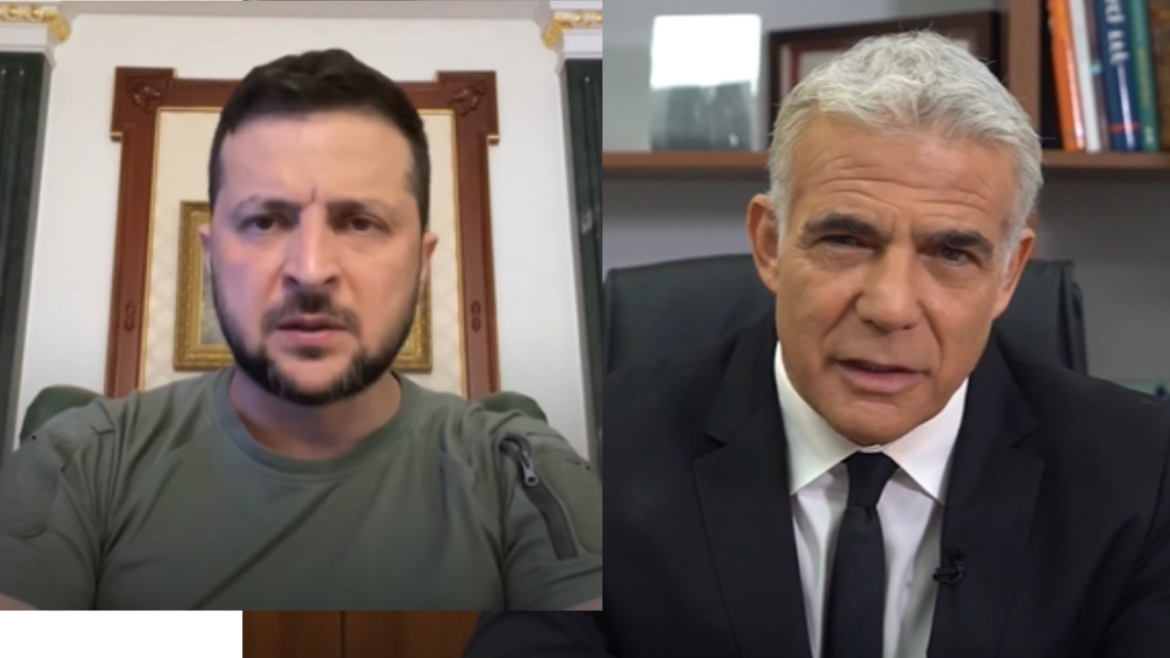 On Thursday, Israel Prime Minister Yair Lapid and Ukraine President Volodymyr Zelensky had their first meeting by phone. After the conversation, Zelensky tweeted that he expects Israel to step up their pressure on Russia’s president, Vladimir Putin, by joining in international sanctions against Russia.

“I count on [Israel’s] accession to the sanctions on Russia and provision of practical assistance to Ukraine in countering the aggression of the Russian Federation.”

Zelensky is also seeking “practical assistance” from Israel in his war-torn nation’s resistance against the Russian invasion that began more than 6 months ago. Israel and Ukraine have had a rocky relationship since the war began—as Israel tries to balance and maintain its ties with both Ukraine and Russia. Lapid—who was noticeably pro-Ukrainian in his previous role as foreign minister—was a little vaguer about his stance now that he is prime minister.

According to a statement from his office, Lapid wished Zelensky a happy Independence Day (last week, the country celebrated its independence from the former Soviet Union 31 years ago). Lapid also offered condolences to all those who have died in the recent fighting, and he urged Zelensky to find a diplomatic solution to the conflict.

The conversation was also a platform for Lapid to again caution a group of Orthodox Jewish pilgrims planning to make their annual trek to a revered site in Ukraine this year on Rosh Hashanah not to do so. Israel’s Foreign Ministry has warned pilgrims that to do so while the war is still raging could pose a “real and immediate risk to lives.” A famous Rabbi, Nachman from Uman, is buried in central Ukraine. Orthodox Jews flock to his grave every September to pray and hope to receive a blessing.

Prime Minister Lapid’s government has shipped a large amount of protective gear to Ukraine, and since July, Israel is also providing financial support directly to civil aid organizations helping those impacted by the war. However, no offensive weapons or defense systems (such as the Iron Dome) have been provided.

Israel’s ties with Russia have been frayed by the war. Militarily, Israel needs a friendly relationship with Putin because Russia controls the airspace over Syria (and there is a large Jewish population in Syria), and Israel makes frequent strategic strikes on Iran-backed Hezbollah targets in Syria for security purposes in the north (although the missions are never confirmed or denied by Israel).

So far, Russia has expressed its displeasure with Israel’s aid to Ukraine in passive-aggressive ways. Earlier this summer, Russia hinted strongly that it would close down the Jewish Agency (effectively cutting off any Jewish people who wanted to make Aliyah to Israel). The decision to shutter the doors of the organization is “on hold” for now until mid-September, when a Russian court is expected to rule on the case.