Teen Hiker Rescued After Falling Off Waterfall While Taking Pictures: ‘Absolutely A Miracle’ 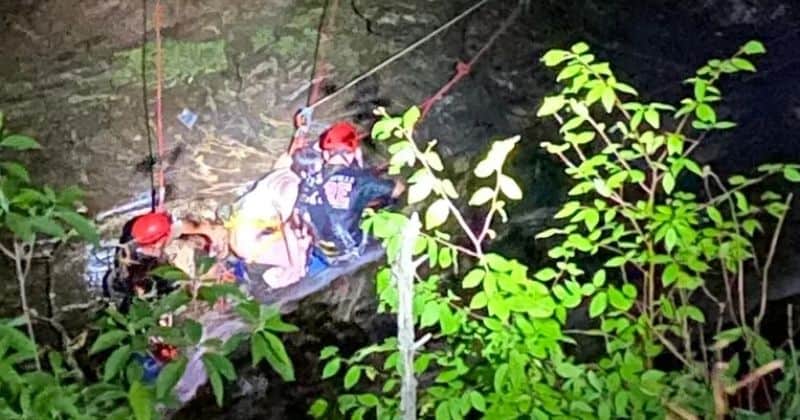 A teen hiker was successfully rescued with only minor bruises after falling off a waterfall while taking pictures. Rescuers called the rescue an absolute miracle.

On May 20, the teen girl was reportedly hiking in Helen, Georgia, when she slipped while taking pictures. She accidentally fell at Raven Cliff Falls and got wedged from the chest down in between rock formations.

Several search and rescue teams in Rabun County, Georgia responded to the scene of the incident. They began the tiring and difficult rescue at around 5:20 PM. It was an extremely challenging location to get into and the rescuers had to use a lot of gear. A Georgia State Patrol helicopter was also used to transport the rescuers to the site.

Chris Wright of the Rabun County Technical Rescue Team said that the situation “looked grim,” however they never gave up to save the 17-year-old girl.

“Through grit and determination, a multi-agency team from all over the region pulled off a miracle,” Chris said.

After about 6 hours of the rescue and with the help of 17 rescue agencies, they finally succeeded in rescuing the young girl. Miraculously, the girl only had minor bruises despite the ordeal that she has been through.

“In a miraculous turn of events, the female was able to walk assisted back out to the command post for evaluation and transport for minor injuries,” a spokesperson for the Gainesville Fire Department said.

Rabun County Search and Rescue said that this was a miracle!

“Absolutely a miracle, amazing work by everybody under extremely difficult conditions!”

Rescuer Chris also emphasized the lessons he learned through that difficult rescue.

“While I played a very minor role in the overall rescue, there were two lessons I was reminded of: Don’t ever quit, don’t miss the blessing,” he later added. “To see the smile on her face — to know she had been given a new life — was priceless.”