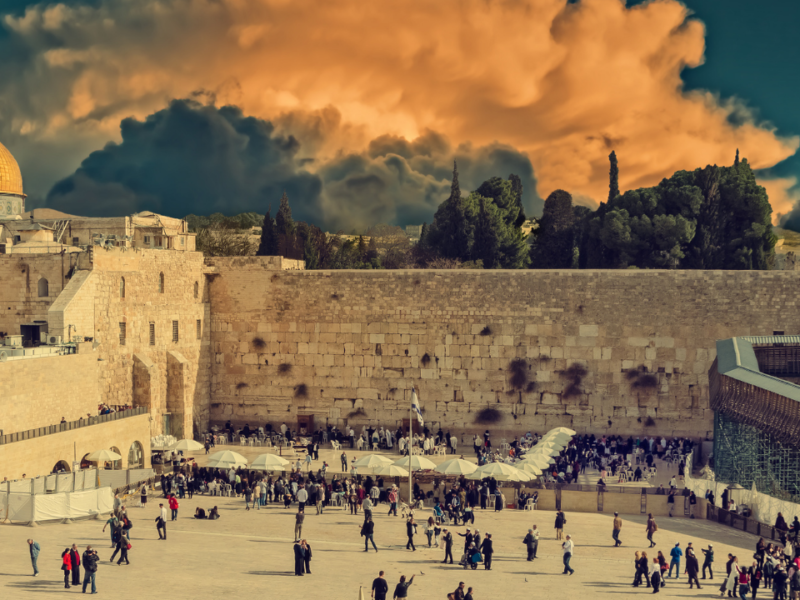 On Saturday evening, Tisha B’Av observances were marred when a Jewish extremist group disrupted a Conservative group of men and women worshipping together at the Western Wall. And on Sunday, there was strife on the hilltop above the wall as an estimated 1,600 Jews entered Israel’s holiest site—the Temple Mount—to pray. Palestinians and police clashed through the night because Muslims claim the compound as one of their top three sacred sites. Then, Jordan, Egypt, Turkey, and various Palestinian leaders jumped in with their condemnation of the annual Jewish pilgrimage.

Tisha B’Av—also known as the 9th of Av (a month of the Jewish calendar)—is a day of remembrance, fasting, and mourning for Jews. Several catastrophic events—including the destruction of the First and Second Temples and key events in the Crusades and the Holocaust—all took place on Tisha B’Av.

The conflict at the Western Wall is a long-standing one that boiled over Saturday evening. Far-right religious zealots marched in and interrupted a group of Conservative Jews worshipping in a part of the Kotel (Hebrew term for the Western Wall) set apart for men and women to pray together. The main area of the Kotel—the section you see in all the photographs—is reserved for the Orthodox, with a partition in between where the men and the women gather to pray. At the beginning of the 21st century, Israel’s high court put in place a temporary (but unsatisfactory) solution—known as the “egalitarian” section.

Tensions were high on Tisha B’Av eve when the extremists barged into the prayer service, singing and praying loudly while erecting a gender-separation barrier and barred new worshippers from entering the area.

“…(This) was an act which had not one gram of loving other Jews,” Yizhar Hess, former director of the Conservative group that was attacked. “The opposite (happened)…a violent takeover of the egalitarian section…with those who came to Jerusalem to fight and humiliate others.”

Prime Minister Naftali Bennett weighed in on the event. Through a Facebook post, he warned about the dangers of a lack of unity among Jews, cautioning that in the past, this has cost Israel her sovereignty.

“Twice we failed and lost our Jewish state: This time we will preserve it. The Jewish people twice had a Jewish state on the Land of Israel, and both times we did not succeed to complete the eighth decade as an independent state because of internal wars and Sinat Chinam.” Sinat Chinam means baseless hatred, and it was rife during the time that the Zealots went to war with Rome. They would even kill other Jews who would not join their rebellion.

Bennett was referring to Israel splitting into two kingdoms only 78 years after King David took the throne and unified the 12 tribes. And then again, in the 2nd and 1st centuries BCE, after the Maccabean Revolt, the Hasmonean Kingdom was conquered by the Romans after 73 years of independence.

Israel is currently in the 73rd year of its third time as a nation in the land, after being re-established for the third time in 1948.

Foreign Minister Yair Lapid also condemned the “Sinat Chinam” of the extremists. “We won’t let them destroy the Kotel, destroy Israeli society or destroy our relations with the Jewish world. The Kotel belongs to every stream of Judaism, and it will be a place where every Jew feels at home.”

[Note: Sinat Chinam was not the main reason the temple was destroyed in 70 CE, but rather because of Jewish rejection of the Messiah. Yeshua predicted as much in Matthew 23:37-39:

“Jerusalem, Jerusalem, you who kill the prophets and stone those sent to you, how often I have longed to gather your children together, as a hen gathers her chicks under her wings, and you were not willing. Look, your house is left to you desolate. For I tell you, you will not see me again until you say, ‘Blessed is he who comes in the name of the Lord.’”]

While turmoil raged among the “tribes” worshipping at what is believed to be a retaining wall for the Second Temple, 1,600 Jews faced international ire as they ascended to the Temple Mount to worship on Sunday.

The Temple Mount—arguably the most hotly disputed piece of real estate in the world—is also home to the Al-Aqsa Mosque.

During Ramadan in May, nightly violence by Palestinian protestors over a land dispute in Jerusalem and the Temple Mount escalated into a war—with Hamas terrorists firing over 4,000 rockets into Israel in an 11-day conflict.

Ra’am, the Islamist party that is part of Israel’s new governing coalition, also railed against the Jewish “settlers,” which included one Knesset member, for standing in front of the iconic golden Dome of the Rock Mosque and singing Hatikvah, Israel’s national anthem.

In a statement, Ra’am declared that the Al-Aqsa Mosque and the entire hilltop are “solely the property of Muslims. The events that may result from (continued clashes and provocations) could inflame the situation in Jerusalem and entire region, leading to a catastrophic religious war.”

Israel captured all of Jerusalem, including the Temple Mount, from Jordan in the defensive 1967 Six-Day War. In 1994, Israel made a peace treaty with Jordan and gave custody of the Temple Mount and other Muslim holy sites in the city back to Jordan.

For decades, Israel’s official policy has been that Jews can visit but not worship on the Temple Mount. However, Israel’s Channel 12 recently reported that it appears that a quiet “revolution” may be underway, signaling a significant shift in the status quo.

For several months, every morning, Jews have been quietly praying on the Temple Mount (with no outward symbols such as prayer books and shawls). They have even been conducting Torah lessons there. In times past, the Israeli police on the Mount would have immediately shut down such activities. However, Channel 12 reports that they seem to be unofficially giving it their approval by allowing the actions to occur.

After the pilgrims ascended the Temple Mount on Sunday, Prime Minister Bennett asserted that both Jews and Muslims have “freedom of worship” at the holy site.

For just $100 per month you can bring the gospel to 10,000 homes. Join us as media missionaries! GIVE NOW
VIEW COMMENTS
« Ben & Jerry’s to Boycott Selling Ice Cream in Certain Parts of Israel Becoming One With The Savior »