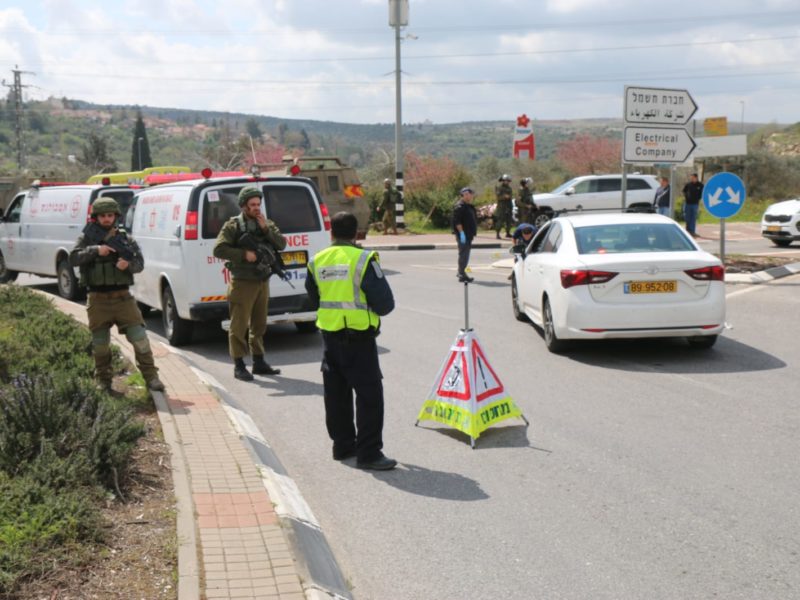 Arab terrorists carried out a terror attack at several locations in Samaria on Sunday, during which they murdered an Israeli, critically wounded another and moderately wounded a third.

Initial reports indicate that the attack began at the Ariel Junction, at which a terrorist stabbed a soldier, stole his weapon and shot him. The cell then hijacked a car from a citizen, shot him and drove to the Gitay Avisar Junction, where they fired at Israelis and wounded several of them.

Magen David Adom paramedics evacuated two seriously injured victims to Beilinson Hospital, including a 35-year-old man who is on life support, and a 20-year-old man.

One of the victims was pronounced dead shortly after the attack.

Emergency medical technician MDA Hananel Hess recounted that when he was passing through the Ariel intersection he noticed a commotion. “I saw soldiers running and I heard shooting. I realized that something was going on and alerted MDA forces. When the shooting stopped, I saw a young man of about 20 lying unconscious with gunshot wounds to his upper body.”

The terrorists fled the scene of the attack, and massive forces, including a helicopter, were deployed to capture the terrorists.

The Samaria Regional Council together with the defense establishment decided to close the gates of the Barkan industrial zone as well as all those at the entrances to Israeli communities in the area.

Yossi Dagan, head of the Shomron Regional Council, stated following the attack that “we will never break, we will never retreat. The Israeli communities in Samaria are part of the Jewish people and part of the State of Israel.”

“Every time we start talking about diplomatic plans, we see a rise in terrorism,” said chairman of the Yesha Council Hananel Durani. “We must remember that Palestinian Authority is the one that continuously incites, pays salaries to terrorists and glorifies them. It fans the flames of hatred and causes murderous attacks.”

He added that “those who think that attacks and killings will stop us from building and growing are wrong! On the contrary – we will not stop, we will continue to build, grow and develop.”

For just $100 per month you can bring the gospel to 10,000 homes. Join us as media missionaries! GIVE NOW
VIEW COMMENTS
« 40 Days to Overcome – Day 11 IDF First Sergeant Gal Qeidan Killed in Samaria Terror Attack »