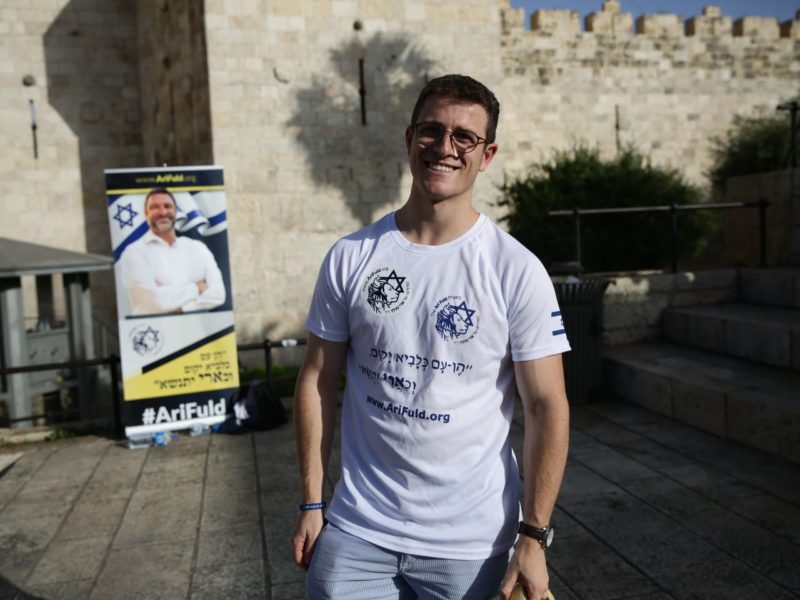 Yom Yerushalayim, the day on which Israel celebrates the anniversary of the reunification of its capital during the 1967 Six Day War, was a very special day for Ari Fuld. He participated in the Jerusalem Day parade every year.

However, this was the first year Fuld did not attend the traditional March of Flags. He was murdered by an Arab terrorist at the Gush Etzion mall in September 2018.

The Ari Fuld Project dedicated to his memory decided to ensure he was still present in spirit at the march and volunteers handed  out stickers and wristbands to the participants of the Jerusalem Day Flag Parade in Ari’s memory, “to make Ari’s presence felt at the parade this year, as it was felt every year in the past,” as the organization explained.

The volunteers distributed items to the tens of thousands of Israelis who marched along the parade route through Jerusalem’s center and throughout the Old City.

“It was very important to us that Ari’s presence be strongly felt at the Jerusalem Day parade, and I think we succeeded. Our wonderful volunteers handed out some 5000 stickers and another 5000 wristbands, and we could have easily handed out twice that amount,” Stephen Leavitt, Director of The Ari Fuld Project, told TPS.

“Not only was Ari remembered at the parade, but people came over to Miriam [Fuld’s widow] and Ari’s parents and told them new and amazing stories about Ari,” he added.

Fuld was stabbed in the back by a Palestinian terrorist, fought his assailant, and chased and shot him before collapsing. He died later in a Jerusalem hospital.

Through his last moments of bravery, he prevented an attack of a larger scope and saved lives, Israeli defense officials have said.

In November, Fuld was posthumously awarded the Civilian Courage Award, the highest civilian decoration in Israel.

The Ari Fuld Project is dedicated to keeping Fuld’s memory alive, as well as continuing his projects of defending Israel and the Jewish people through education and activism.

For just $100 per month you can bring the gospel to 10,000 homes. Join us as media missionaries! GIVE NOW
VIEW COMMENTS
« 4 Years After The Emanuel Church Shooting Comes A Poignant Film Of Justice And Faith Trump Tells Israelis to ‘Get Their Act Together’ »