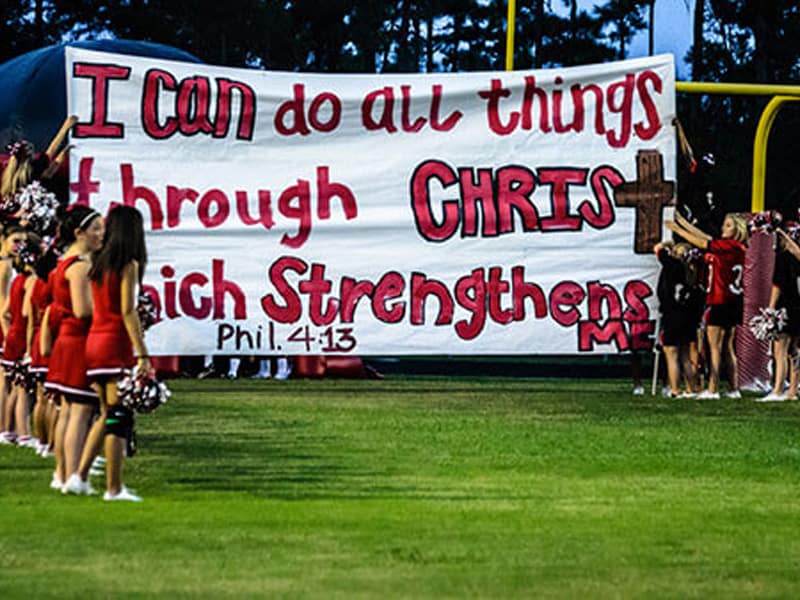 Cheerleaders from Kountze High School were sued for writing Bible verses on game day banners. Eventually, they won their case and now inspire others to fight for their rights.

In 2012, the cheerleaders from Kountze High School in Texas began putting Bible verses on their banners for each game. They wrote uplifting verses aimed to inspire their football players and fans. Most people loved the morale booster, but the Wisconsin-based Freedom From Religion Foundation soon sent in a complaint to the school’s administration.

The cheerleaders were ordered to stop using religious phrases. However instead of accepting this, these bold young women took their case to the Texas Supreme Court.

Victory for the Cheerleaders

In 2016, the cheerleaders won their case after the Supreme Court voted unanimously in their favor. But their endeavor was far from over as the ruling was appealed.

Despite the Court of Appeals being more liberal, the ladies were victorious once again. The Court’s opinion was, “that the run-through banners are neither government speech nor school-sponsored speech, leads to absurd results.” In September 2017, the Court said that the cheerleaders’ right to display Bible verses was “private speech” and thus to be protected.

“We are pleased that once again religious liberty is vindicated and that cheerleaders across the state of Texas have the right to have religious messages on banners at high school football games,” said Hiram Sasser, general counsel who represented the cheerleaders.

This was a huge victory not only for thes believers but also for all students’ freedom of speech and freedom of religion.

“No school district should be able to censor, ban, or claim ownership of the private religious speech of its students,” he added.

Today, these courageous women inspire others not just to be silent but to fight for their rights.

Share this story to inspire other Christians to be a bold witness for Jesus!

For just $100 per month you can bring the gospel to 10,000 homes. Join us as media missionaries! GIVE NOW
VIEW COMMENTS
« Fearing a Pending Collapse? Israel Approves the Transfer of Armored Vehicles to PA Hope Remains »