BREAKING
Israel-led Team Solves Mystery Why Lightning Strikes Fewer Times Over The Ocean...
Tourism In The Holy Land Is Soaring Back Up To Pre-Pandemic Highs
Lapid Speaks Directly To Palestinians—Offers Them “Another Way” Out Of The Ongoing...
Home Israel The Abraham Accords are an answer to prayer – ‘a tectonic shift in the region,’ says Joel Rosenberg

The Abraham Accords are an answer to prayer – ‘a tectonic shift in the region,’ says Joel Rosenberg

At Jerusalem Prayer Breakfast, ALL ISRAEL NEWS editor-in-chief urges Christians to understand the meaning of these historic normalization treaties with Israel 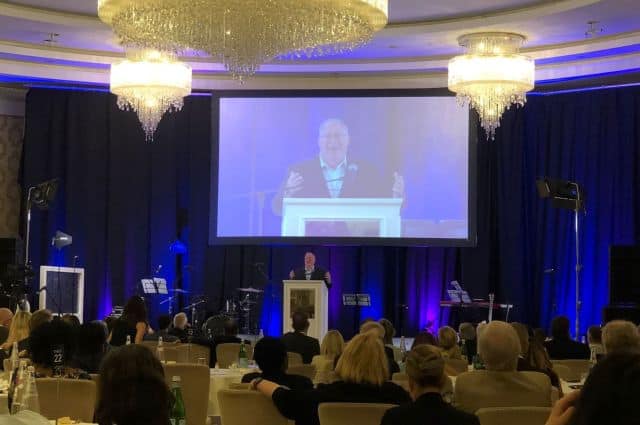 JERUSALEM—Joel Rosenberg did not imagine that after he made Jordan’s King Abdullah a target for assassination by ISIS militants in his novel, “The First Hostage,” that it would lead to an invitation to the palace in Amman – and an open door to meetings with leaders across the Middle East.

Speaking at the Jerusalem Prayer Breakfast on Thursday, Rosenberg recounted his meeting with the king, who wanted to show the novelist “what he’s doing every day to make sure my novels never come true.”

Rosenberg was so impressed by the experience he suggested to the king that other Evangelical leaders would benefit from a deeper understanding of Jordan and the issues it faces as well. The king, surprisingly, agreed to host a group.

“This opened doors to every moderate leader in the Middle East,” Rosenberg said.

This invitation led to a series of meetings that Rosenberg coordinated – and seven delegations of top Evangelical leaders to meet with the leaders of Muslim nations including Egypt, Saudi Arabia, the United Arab Emirates and Bahrain. The most recent one, in April, included Bahrain, the UAE and Israel.

“Why now? Because we are praying for open doors – we are in a different season of history,” Rosenberg said.

“Why are Arab and Israeli leaders – in this case Arab Muslim leaders at the highest level – inviting an Israeli Evangelical and other Evangelicals in to meet with them?”

Rosenberg said this is nothing short of an answer to prayers that Evangelicals have been praying for years for peace for Israel and across the region. Rosenberg also confronted the notion that the Accords are actually a set up for the Antichrist.

“We pray for the peace of Jerusalem, but then I get people saying, ‘Oh, those Abraham Accords – that’s not real peace. That’s probably just a setup for the Antichrist.”

“Daniel 9 does say at some point Israel’s going to make a deal with the Antichrist,” he said, “But no, that bothers me. It’s such a superficial understanding of prophecy.”

“To say that the Abraham Accords are not fulfilling some of our prayers – our answers to prayer for peace – is like praying for Peter’s release from prison,” and then not believing “he’s at the front door,” Rosenberg said referring to the Book of Acts.

But it is also going unnoticed.

With quarantines keeping most people around the planet inside and insular, many Christians did not catch the significance of the Abraham Accords – the historic peace treaty signed between Israel and several Muslim nations in 2020.

“There are tectonic shifts going on in this region and some Evangelicals are noticing it, and Jews are looking at it and watching it closely, but many are just absorbed with the issues in our own countries,” Rosenberg said.

Part of the shift toward openness from these once mysterious and closed nations is that they are intentionally distancing from radical Islam and terrorism. More Muslim nations are also promoting tolerance for minority groups and supporting other religious communities in their midsts.

And, Rosenberg said, they have found a listening ear in Christian Evangelicals who have been willing to meet with and pray with them.

They are telling us, “‘No one will listen. The media won’t listen. Other nations are attacking us. We’re being blasted on Al Jazeera every moment of every day. We can’t find people who will listen. Maybe Evangelicals who pray for peace. Maybe they want to know what we’re up to.”

Rosenberg said there is no need to agree on every point – but there is a need for discussion and to strengthen those countries’ Christian communities and other minority groups.

It is the same concept that has been developed for years between Christian and Jewish groups.

“This goes to the heart of Jerusalem Prayer Breakfast: Can we be friends with people that we have fundamental, theological and perhaps political disagreements with?

“Every Jewish person that comes to this event, who doesn’t believe in Jesus like I do, has to make a decision, ‘Am I going to build relationships and strategic alliances when people might fundamentally disagree with about who Jesus is?’”

It is worth nothing that that first meeting with King Abdullah ended with Rosenberg giving him a copy of his latest novel, “The Third Target,” and reading the very first line of the book to him: “I never met a king before.”