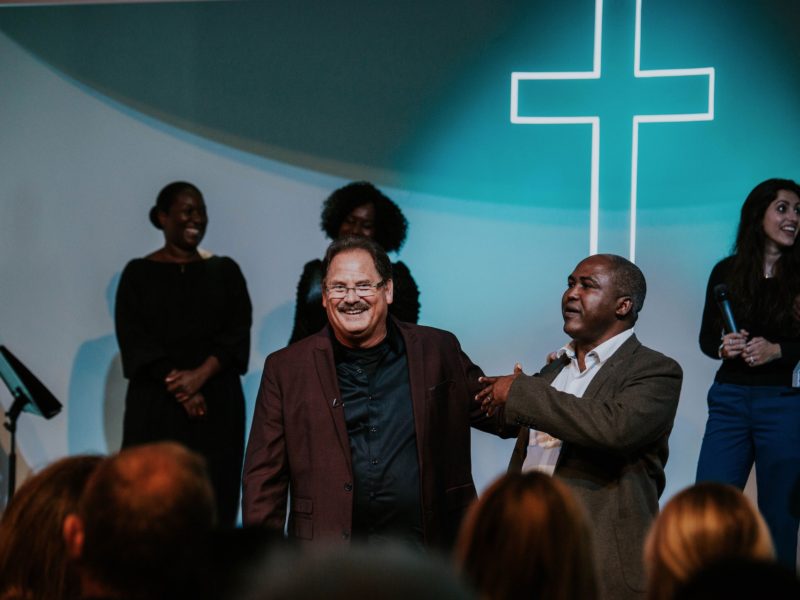 1995 was a hugely significant year for revival. On the one side of the Atlantic, God was sparking the Brownsville Revival that attracted people from across the nations, while on the other he was raising up a fledgling new Christian network that would take His message of revival to the world.

GOD TV celebrates it’s 25th Anniversary next year and 2020 will also mark 25 years since the start of the Brownsville Revival. Looking back to 1995, we can remember it as the year God would give His people a new revelation of His Father’s heart and it would happen in two very different ways on separate continents.

In Europe God would give birth to a new Christian network that would spearhead revival across the globe through media, while in North America He would move upon a local church in an outpouring that would bring a fresh experience of His presence and touch the lives of believers from across the nations.

The new network was the Christian Channel Europe in London, UK, which became GOD TV and the local church was the Brownsville Assembly of God in Pensacola, Florida, USA. Little did we know then, the extent to which God would use these two movements or how they would ultimately dovetail, but God was already working behind the scenes to foster close links for His eternal purposes and the fruit would be life-changing for millions of people.

In Britain in the 1990s, there was no such thing as Christian television but that was about to change. God had brought a young couple from South Africa to the UK, who He would use to pioneer faith-based broadcasting across Europe. Known as Rory and Wendy Alec, they came from a background in television production and advertising and were uniquely equipped to take on the challenge.

Even so, it would take great faith and they would have to overcome a great many obstacles. They had received several prophetic words about how God would use them, but at the start of 1995, it seemed their dream lay in tatters. It was proving impossible to get a broadcast licence, let alone to secure a TV platform, on which to launch, but by a miraculous chain of events the couple was able to sign a contract with BSKYB on June 14th, 1995 to launch on the SKY platform reaching 22 nations across Europe.

Meanwhile, on the other side of the Atlantic, Pastor John Kilpatrick and the intercessors in his church had been crying out to God for years, petitioning Him to move in their community, setting hearts on fire for God and bringing a new outpouring of healing and deliverance. And, in that very same week that GOD TV got its licence, on Sunday, June 18th revival broke out in his church in a meeting with visiting evangelist Steve Hill. Steve was only scheduled for one service, before leaving for Russia, but he was to stay several years!

Back in the UK, it was on October 1st, 1995 that the Christian Channel Europe was launched via satellite with the vision of reclaiming the airwaves from the kingdom of darkness. It made broadcast history as Europe’s first daily Christian network and would also give viewers the opportunity to see God at work in revival hotspots and would grow into the global network that we now know as GOD TV.

Significantly the Brownsville Revival started on Father’s Day and would facilitate a new generation of fathers in the Body of Christ. Also known as the Pensacola Outpouring it was to be the birthing ground of a whole stream of new ministries that would literally impact the earth. Daniel Kolenda who is now the leader of Christ for All Nations, is just one of the major ministries that came out of Brownsville. Characterised at the time by hundreds of people lining up hours, before the services started, just to get in, the Brownsville Revival would light a fire that is still burning today.

There were passionate messages from Evangelist Steve Hill as he called sinners to get right with God and believers to “Go after God” with all their heart. Thousands came running to receive God’s mercy and ‘The Mercy Seat’ sung by Charity James became the iconic song that captured the essence of the Revival. “Come running to the Mercy seat, where Jesus is calling…” was the heartfelt invitation each night, urging people to enter into a holy place with God, embracing His presence and receiving His healing.

These meetings would be some of the first revival broadcasts that GOD TV would air, as it grew from strength to strength. Right from the start, GOD TV had a strong focus on revival and its own original series, Rory’s Revival Report, took to the air with updates from places God was moving including Bogota, Colombia.

Other revival programming would come from The Airport Church in Toronto, Canada led by John and Carol Arnott, in a movement that became known worldwide as the Toronto Blessing and John and Carol, who now head up Catch the Fire Ministries can still be seen on GOD TV along with others who were aligned with Toronto including Randy Clark.

The picture below shows Steve Hill (left) and John Kilpatrick (right) at a Brownsville Revival Reunion along with Evangelist Nathan Morris (middle) who would later partner with Pastor John and Church of His Presence in the Bay Revival which was televised LIVE on GOD TV for many weeks.

God was up to something powerful in these early days during the 1990s, which would lay a firm foundation for revival today. At Brownsville, Pastor John Kilpatrick was overjoyed to see so many new converts coming into the Kingdom and they kept on coming. The outpouring was an amazing example of the Evangelist and the Pastor working together as one, first bringing people to a place where they could receive God’s free gift of salvation and then discipling them, teaching them to worship God with all their hearts.

The worship at the Brownsville Revival was powerful with Lindell Cooley leading the crowds in new-found adoration and as people were miraculously transformed their hearts were turned towards reaching others. God was raising up many different ministry gifts that continue to touch lives around the world today.

Meanwhile, on the GOD Channel / GOD TV, viewers watched passionate salvation messages from evangelists like Steve Hill and many were being saved. A new electronic church was developing who would be empowered to take the Gospel further. Fiery German evangelist Reinhard Bonnke was also popular with viewers as they caught a glimpse of God at work in his mass crusades in Africa.

God is the God of all mercy and it is encouraging to know that he sent a South African missionary to the USA, Rodney Howard-Browne to New York during these days to give the city an opportunity to come to know Jesus before the tragic events of 9/11. The founder of Revival International, Rodney preached at Madison Square Gardens for many weeks and these messages were carried on GOD TV in a long-running series entitled ‘Good News New York’

Ward Simpson came out of the Brownsville Revival

Ward later became its Executive Director and as part of the leadership team at Brownsville would learn to live, eat, sleep and dream revival on a daily basis.  Today Ward is the President and CEO of GOD TV, which is an amazing story in itself – the fulfillment of a seed planted some 25 years ago, but which is now bearing much fruit. The photo below shows Ward and his wife Lydia at a GOD TV church event in London. 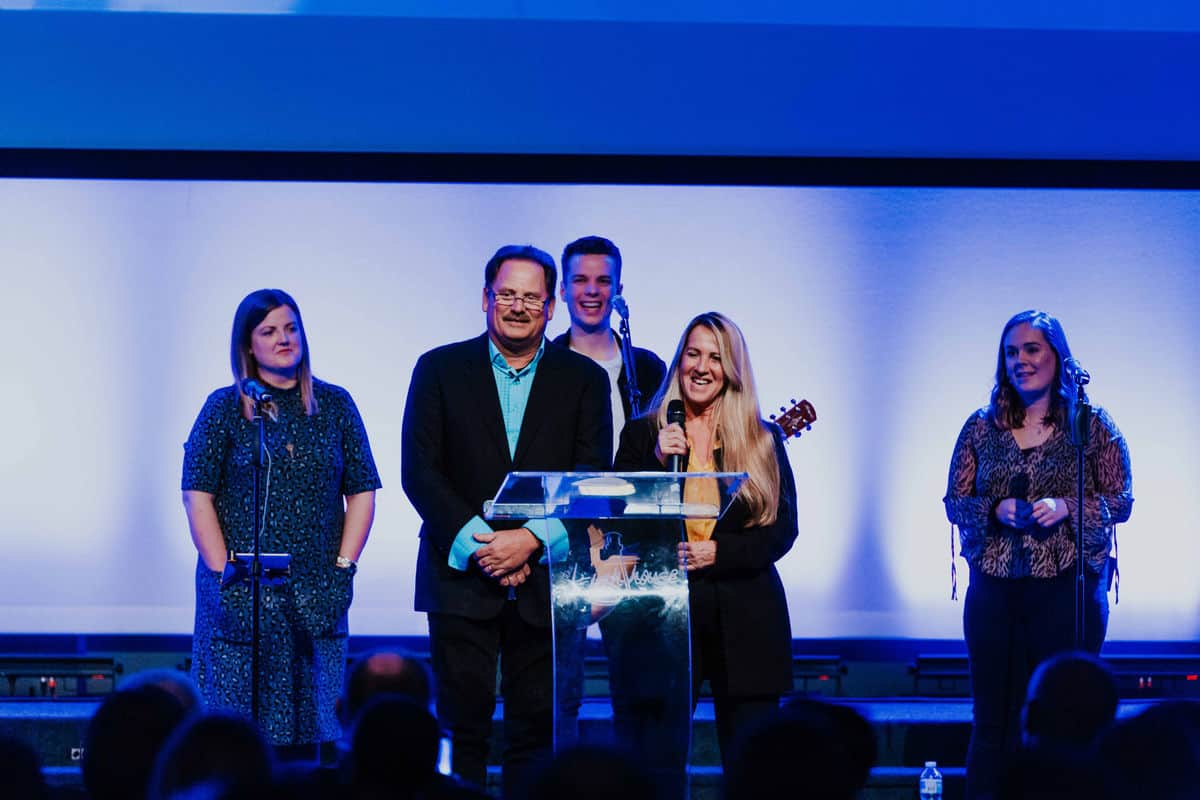 “Go After God” was the passionate cry of Steve Hill and this challenge could not be more apt in these End Times. It echoes GOD TV’s core focus to help people find God and respond to the Great Commission. Now it is also a story of how God can spark revival and cause it to grow beyond anything that can be imagined. Why? Because God loves all people and wants everyone to come to know Him and receive all He has for them.

God loves you and has a distinct plan for your life. It starts with salvation, it includes healing and deliverance and it does not end there. He wants His sons and daughters to achieve all He has called them to do. GOD TV was called to equip the Church and reach the lost and, like GOD TV, your specific assignment from God will take great faith, obedience and often require the support of the people He has placed around you. God loves to bring people together, in strategic alliances to deliver eternal rewards. He loves to see His people walk together in unity as this brings His greatest blessing.

Stay tuned also to discover more of God’s presence in your life through the network’s 24-hour line up of different ministries. You will be encouraged as you see what God has accomplished through GOD TV in tandem with other revival movements around the world. In addition to the Brownsville Revival with John Kilpatrick,  Steve Hill and Lyndell Cooley; some others include:

Also don’t miss Light the Fire Again Pensacola – this is a gathering of past and current revival leaders hosted by Christ for All Nations (CfaN) in association with GOD TV that will take place from September 4-7, 2019 in Florida.

The revivals, each with their own style and culture, had many things in common. All were characterized by an overwhelming sense of the presence of God, spontaneous joy and laughter, repentance, deliverance, physical and emotional healing, restored marriages and the salvation of the lost. And of course, GOD TV is there to beam these moves of God around the world.

For just $100 per month you can bring the gospel to 10,000 homes. Join us as media missionaries! GIVE NOW
VIEW COMMENTS
« Back to School! Can Students Bring Their Bible & Faith Too? Overcoming Cultural Custom: Lessons Learned from Mary Slessor »