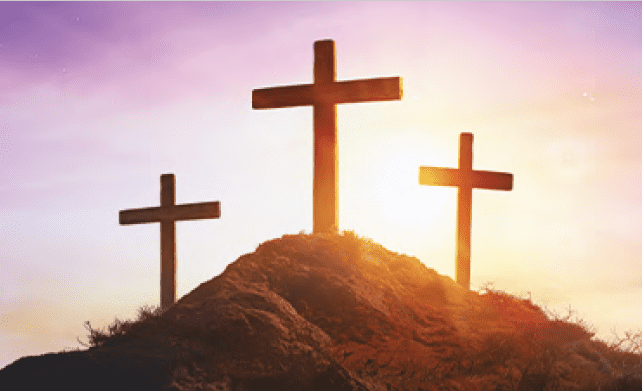 The Cross of Christ is His redemptive act, offering Himself as a sacrifice for our sins.  In other words, it demonstrates redemption in action. Redemption is the act of saving or being saved. It is also the act of gaining or regaining possession of something in exchange for payment.

The highest example of redemption is in the way God redeemed us from the Fall of Man. He made a way to reclaim, retrieve and recover us. But, it would be a very costly process that would require nothing less than the sacrifice of our Lord on the Cross of Christ.

1) Why was Redemption necessary?

Redemption was necessary in order to restore us to a right relationship with God. We became separated from God through sin. As a result, God banished us from the Garden of Eden and we needed someone to reclaim us! We were pawned at the pawnshop at a cost too prohibitive for anyone to retrieve us! Who would come and pay the cost to redeem us from this prison?

Adam and Eve sinned and fell from God’s grace. Furthermore, they passed the curse of sin on to their children so that everyone inherits their sin and guilt. As Romans 3:23 tells us, “For all have sinned and fallen short of the glory of God.”

2) Redemption required death as a sacrifice

Redemption, therefore, required a sacrifice and we see in Genesis how God made garments of clothing from animal skin for Adam and Eve to hide their nakedness. We also see from Genesis 4:3-5 that Abel’s offering pleased God while Cain’s did not. Abel’s offering came from his flocks and Cain’s from his crops!

So, God required animal sacrifices to provide a temporary covering of sins and to foreshadow the perfect and complete sacrifice of Jesus Christ. Sacrifice, therefore, is something that is precious for a cause or a purpose.

After the flood receded, Noah sacrificed animals to God. Animal sacrifice is an important theme found in the Old Testament because “without the shedding of blood there is no forgiveness of sins.” (Hebrews 9:22).

When done in faith, this sacrifice provided a temporary covering of sins. God commanded these animal sacrifices so that the individual could experience forgiveness. The animal served as a substitute—it took the sinner’s place in death. However, it was only temporary.

You may be asking yourself, why animals? What did they do wrong? That is the point—since the animals did nothing wrong, they died in place of the one performing the sacrifice. Jesus Christ also did nothing wrong but willingly gave Himself to die for the sins of mankind.

As 2 Corinthians 5:21 says, “God made Him [Jesus] who had no sin to be sin for us, so that in Him we might become the righteousness of God.” Through faith in what Jesus Christ accomplished on the Cross, we can receive forgiveness.

Redemption required blood because the life of a creature is in the blood. (Leviticus 17:11). It is the blood that makes atonement for one’s life. The definition of atonement is: satisfaction or reparation made by giving an equivalent for an injury, or suffering that is received in satisfaction for an offense or injury.

The Mosaic Law required that once a year, the priest was to make an offering of the blood of animals on the altar of the temple for the sins of the people. But this blood offering was limited in its effectiveness, as it had to be offered repeatedly.

This was a foreshadowing of the “once for all” sacrifice which Jesus offered on the Cross. Once that sacrifice was made, there was no longer a need for the blood of bulls and goats. The blood of Jesus has the power to atone for an infinite number of sins committed by an infinite number of people throughout the ages, and all whose faith rests in that blood will be saved.

The blood of Christ is the basis of the New Covenant. On the night before He went to the Cross, Jesus offered the cup of wine to His disciples and said, “This cup is the new covenant in My blood, which is poured out for you.” (Luke 22:20).

The wine symbolized the blood of Christ, shed for all who would ever believe in Him. When He shed His blood on the Cross, Jesus did away with the Old Covenant requirement for the continual sacrifices of animals.

Covenants always required blood. A covenant is a binding agreement or a contract. In Genesis 15:9-10 we read about God’s blood covenant with Abraham in which He confirmed three promises to Abraham: the promise of heirs, of land, and of blessings (Genesis 12:2-3).

In God’s covenant with Moses / Israel (The Mosaic Covenant) the blood of animals served as a covering, or atonement, for the sins of the people. Therefore, the animal gave its life in place of the sinner’s life.

One might ask why Jesus had to die in the first place. This is the over-arching message of the Bible—the story of redemption. God created the heavens and the earth, and He created man and woman in His image and placed them in the Garden of Eden to be His stewards on the earth. However, due to sin God the Father sent His one and only Son into the world to take on human flesh and to be the Savior of His people.

Born of a virgin, Jesus avoided the curse of the Fall that infects all other human beings. As the sinless Son of God, He could provide the unblemished sacrifice that God required. God’s justice demanded judgment and punishment for sin; therefore God’s love moved Him to send His one and only Son to be the propitiation for sin.

Christ is the Lamb of God pointing back to the institution of the Jewish Passover in Exodus 12. This was the time in history when God commanded the Israelites to sacrifice an unblemished lamb and smear the blood of that lamb on the doorposts of their homes.

The blood would be the sign for the Angel of Death to “pass over” that house, leaving those covered by blood in safety. When Jesus came to John to the baptized, John the Baptist cried, “Behold, the Lamb of God, who takes away the sin of the world!” (John 1:29).  This was God’s far-reaching plan.

“It is finished” (John 19:30) was what Jesus meant by His dying words on the Cross: . Never again would the blood of bulls and goats cleanse men from their sin. Only by accepting Jesus’ blood, shed on the Cross for the remission of sins, can we stand before God covered in the righteousness of Christ. (2 Corinthians 5:21).

5) Redemption required the Cross of Christ

In conclusion, the Cross of Christ is not an ornament or decoration. It is the symbol by which we can remember how God has redeemed us from the pit of hell and has given us a new life and a new home. We should keep the Cross close to our hearts and treat it with love and care.

We see the persecution of Christians for their faith in many places across the globe. They know what it means to carry their cross and follow Jesus. For the rest of us, our job is to remain faithful to Christ. God may never call us to give the ultimate sacrifice, but above all, we must be willing to do so out of love for the One who saved us and gave His life for us.

Thank you for the Cross, Lord Jesus.

Also read: 8 Reasons Why You Can Be Confident Even When All Hope Seems Lost! A message of hope from GOD TV’s CEO, Ward Simpson

For just $100 per month you can bring the gospel to 10,000 homes. Join us as media missionaries! GIVE NOW
VIEW COMMENTS
« 40 Day Challenge Day #36 – Our Heavenly Father 90-Year-Old Coronavirus Survivor Testifies: ‘I Could Feel God’s Presence’ »