The Glory of Jesus in Las Vegas: An Encounter With the Risen Lord | God TV
Faith 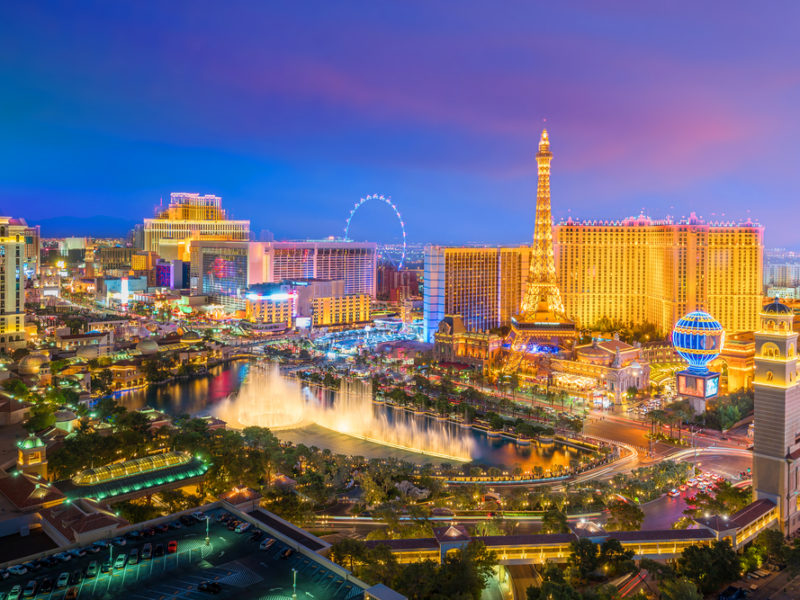 Addiction to drugs plagued me as a teenager. Then, in 1999 I became a student at the Youth With A Mission School of Ministry in Los Angeles. Although I had been sober for eight months, I still felt a craving for drugs, so I would throw myself into God’s presence, wanting the desires to be taken away.

I often asked for prayer from other students, especially a small group of fellow intercessors and worshipers including close friends Jeremy and Maria Lautt. We had prayed and worshipped at numerous locations throughout Los Angeles and Orange County and had seen the Lord move.

Our little group was adventurous, wanting to see new sites, but we also sensed that we were to pray over the city of Las Vegas from the Stratosphere, a hotel, casino, and tower. (The Stratosphere Tower is the tallest freestanding observation tower in the USA). Before we left on our trip I was praying again about the craving I still struggled with and had a vision of dragons. I didn’t know what it meant at the time, but I had faith that the Lord would show me the meaning.

Once in Las Vegas we saw many of the sights and shopping areas. We prayed together a lot and Jesus filled us with joy. On the first day, led by the Spirit, we experienced several instances when we got to share our faith. However, a heavy burden began overwhelming us throughout the second day of that weekend. Jeremy was the first to receive the burden for Las Vegas as he began the day with quiet time before the Lord. He wept for the lost and wayward souls we had seen around the casinos.

We all sensed the unseen spiritual realm surrounding us and began to feel demonic oppression as we found ourselves in front of the Brahma Shrine, a replica of one of Thailand’s most popular Buddhist shrines. Each of us had faced spiritual warfare together on short-term mission trips to India with its numerous shrines and idols, but seeing this idol in the USA grieved our spirits.

As evening approached, the streets got busier and dirtier. People were losing their inhibitions as they were partying all hours of the day. There was a point where our little group began to feel hopeless, as if our prayers were bouncing off a brass ceiling. We began to weep for the city – its people, its visitors, and workers. We knew they were loved by God, but we saw no one sharing their faith. Instead of street preachers, we saw men passing out advertisements for call girls. I felt like my prayers were not going to be answered. Despair started to overcome me.

Our motel was near the base of the Stratosphere. We started making plans to go up in the tower to pray for the city the next day. That evening, May 15, 1999, we decided to pray to end the day, unaware of what God was about to do.

The Glory of the Lord

While praying, I felt like I was to plead the blood of Jesus over the city. Similar to the Apostle John’s encounter in Revelation 1:10, I began experiencing being “in the Spirit.” Maria had a vision of several dragons. She told Jeremy to play the guitar and lead worship over me. I was aware of what the group was doing, but I was immersing in the power and presence of God. In the Holy Spirit, I found myself in a cloud that I instinctively knew was the Shekinah glory of God.

Then I saw Jesus come to me. He was glorious and holy and the presence of God was all consuming. It reminded me of Revelation 1:12-17: ‘I turned to see the voice that spoke with me. And when I turned, I saw seven golden candlesticks, and in the midst of the seven candlesticks was one like a Son of Man, clothed with a garment down to the feet and with a golden sash wrapped around the chest. The hair on His head was white like wool, as white as snow. His eyes were like a flame of fire. His feet were like fine brass, as if refined in a furnace, and His voice as the sound of many waters. He had in His right hand seven stars, and out of His mouth went a sharp two-edged sword. His appearance was like the sun shining brightly.”

Jesus’ face was the brightest light I had ever seen, brighter than the sun. Looking into His eyes, I felt incredible amounts of love emanating from Him. Waves of power and love surged through me. Holiness permeated everything. Jesus’ arms were opening wide to me. Words cannot describe the power and majesty I sensed.

As He neared me I felt as if I were about to die because He was so holy. Then a crown appeared in His right hand and He placed it on my head. I felt so undeserving, seeing Him in His glory. I understood what the Apostle John meant when he said, “When I saw Him, I fell at His feet as though I were dead. Then He laid His right hand on me, saying to me, ‘Do not be afraid. I am the First and the Last’” (Revelation 1:17). I also knew what Isaiah meant when he was encountering the Lord in His glory, “Woe is me! For I am undone….For my eyes have seen the King, the Lord of Hosts.” (Isaiah 6:5).

Journal Recording About that Night

I recorded this encounter in a prayer journal: “I cannot explain it, but I saw the glory of the Lord, His arms open to me, as He gave me a crown. The others were praying over me as this was taking place. We had all kinds of manifestations of the Spirit.”

After Jesus placed the crown on my head, I felt like dragon scales were falling off my body. I was in renewal. The group continued to worship, praying over me. Then still in the Spirit, I found myself back in the Shekinah glory cloud of God and started singing in tongues. At that time I had been baptized in the Spirit for only seven months. I had been praying in tongues daily, but a new language emerged as I sang in tongues. Power was erupting out of me and the presence of God enveloped us. I began weeping because I was seeing the Lord in His glory.

I felt like a new creation (2 Corinthians 5:17). The intense cravings for drugs were gone. When I saw Jesus in His glory, He delivered me from this demonic oppression, setting me free. I realized that the dragons I had seen in the vision several nights before were demonic spirits that Jesus took away when I saw Him in His glory.

My journal entry says, “I experienced the glory of the Lord! I was given a new prayer language as I saw the Lion of Judah.” After seeing the Lion of Judah roar in His majesty, silence overcame our group. A sense of awe and wonder surrounded us. I was no longer in the Spirit. We sat there in stillness focused on Jesus, still sensing the tangible presence of God.

The Continued Moving of the Holy Spirit

Then Jeremy started experiencing being in the Spirit, while we were praying over him for several hours. After all of this we rested and began the next day ready to go up the Stratosphere. The presence of God was overwhelming us. Going to the top of the Stratosphere we placed small pieces of paper, with Scripture references, in various locations. At the very top of the Stratosphere I read Psalm 107 and prayed it over Las Vegas.

We left rejuvenated and refreshed, no longer seeing the city through the eyes of despair or hopelessness. The burdens were lifting from us while we were experiencing the glory of the Lord in what some people call “Sin City.” We had a revelation that God’s power for redemption is far greater than any of us can imagine. Las Vegas is in His hands and will bring Him a “fruitful harvest” (Psalm 107:37).

For just $100 per month you can bring the gospel to 10,000 homes. Join us as media missionaries! GIVE NOW
VIEW COMMENTS
« Are You Good Enough To Go To Heaven? Pastor Reaches Out To A Muslim Family And Shares This Powerful Reminder »