The Historical Meaning of Israel in the Bible | God TV
Articles 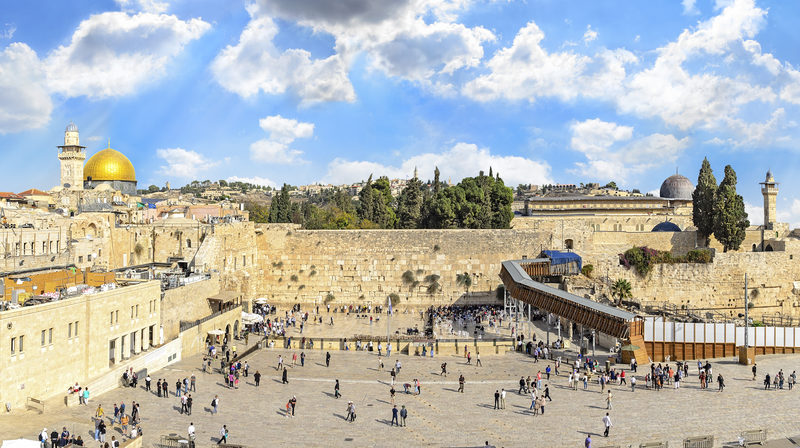 History is more than what we find in a High School history book. The Bible is filled with history. Namely the historical accounts of one country, God’s chosen people, the nation of Israel. Let’s explore the importance of Israel in the Bible.

Israel in the Bible: the Man

“And God said to him, “Your name is Jacob; no longer shall your name be called Jacob, but Israel shall be your name.”  (Genesis 35:10)

Israel in the Bible begins with a man named Jacob. He is the son of Isaac, the grandson of Abraham. We hear his name in liturgies and proclamations throughout the Old and New Testaments – The God of Abraham, Isaac, and Jacob. Even his former name has many occurrences in lineages. Matthew 1:3 uses the name Jacob in the lineage of Jesus.

Jacob means “he takes by the heel”. Israel means “God contends”. His birth name came from his clasping at Esau’s heel when he and his brother were born. It was prophesied that although Jacob is born second, he would be greater than his brother Esau. And living up to his name, he obtained the birthright. His God-given name, Israel, came after meeting an angel from the Lord. They wrestled until dawn. After contending with God’s angel, God gave him the name of Israel.

Israel in the Bible: the Nation

“But the people of Israel were fruitful and increased greatly; they multiplied and grew exceedingly strong, so that the land was filled with them.” (Exodus 1:10)

The second part of the Genesis 35 passage gives Israel, the man, a command. Verse 11 says, “Be fruitful and multiply. A nation and a company of nations shall come from you, and kings shall come from your own body.” And from the introduction to the book of Exodus, it seems that Israel in the Bible obeyed this command. The nation of Israel grew from his twelve sons; Reuben, Simeon, Levi, Judah, Gad, Asher, Dan, Naphtali, Issachar, Zebulun, Joseph, and Benjamin. The nation grew even after the passing of that generation.

As Exodus opens, the nation of Israel is under the Egyptian captivity. They served as slaves either in the fields or making bricks for the constant construction of cities for the Pharaoh. Moses, a man from the tribe of Levi, was called by God to deliver the Israelites out of Egyptian captivity and take them to the land that was promised to Abraham.

However, through many hardships, and setbacks, this journey took the better part of a generation. During this time the Israelites crossed the Red Sea, received the Ten Commandments at Mount Sinai, and arrived at the border of Canaan. But when sent out to spy on the land, they became fearful and would not follow Moses and Aaron into taking the land promised to Abraham. Out of their disobedience, God had them wander through the desert until that generation was passed, and the next one would be ready to enter their rest.

After 40 years, the next generation returned to Jericho, under the guidance of Joshua. God strengthened them, and they overpowered the Canaanites and took the land. Then the Israelites allotted the land according to God’s plan. Each tribe received a portion of the land. The tribe of Joseph received a double portion (Manasseh and Ephraim) due to the mistreatment from his brothers being sold into slavery. The nation of Israel in the Bible settled into their country.

Israel in the Bible: The Country through Saul

“David commanded to gather together the resident aliens who were in the land of Israel, and he set stonecutters to prepare dressed stones for building the house of God.”  (Chronicles 22:2)

The nation of Israel, now living in the Promised Land that was prophesied to Abraham, continued to grow. Living autonomously, they lacked little. However, they saw their neighboring nations having an authority structure; a king. They began to seek this type of governing factor over their country. First, God gave them judges, but the Israelites were not appeased – they demanded a king.

A prophet, by the name of Samuel, warned the Israelites about the cruelness of kings, but they did not listen, and God relented, allowing Samuel to select a king. God still had a plan in place. He spoke to Samuel and gave him instruction to anoint Saul, from the line of Benjamin, as king. Saul did okay for a while, following the Lord, but that changed as he began to assimilate some of the traditions of the lands he was conquering. The Lord rejected him as king, and Samuel was sent to seek out another king. God led him to the house of Jesse, and his son David.

Israel in the Bible: The Country through David

Through much anguish, David succeeded Saul as king of Israel in the Bible. It was through David that the instructions for building a permanent temple for the Lord. Up to this point, especially through the desert wanderings, the presence of God was represented within a tent-like temple. The temple David was to build was to be a permanent structure for the priests to offer sacrifices and the place called the Holy of Holies, where God’s presence was said to reside.

David’s son Solomon actually built the temple, and it stood until the Babylonian king Nebuchadnezzar overtook Israel and destroyed the temple, once again placing Israel in the Bible into exile. They were in exile until the reign of Cyrus the Great allowed Israel to return to their land. And through the ability of Nehemiah, the second temple was built. That one stood through the time of Jesus, even though at that time was under Roman control, and eventually destroyed by Emperor Nero in 70 AD.

The nation of Israel now awaits the coming of the Messiah and the building of the third temple of God.

Israel in the Bible Today

The country of Israel is still around today. Although it is in a constant state of unrest, still battling over the land under the promise of Abraham’s covenant with God. The Muslim community also claims the holy land to be under Islamic rule. As do other nationalities and religions. The Bible teaches that this will continue until the day the Lord returns.

However, news events that occur, namely the capital coming back to Jerusalem are part of the prophecy of Israel in the Bible. This news is exciting to the Israeli people. This began another prophetic fulfillment, the return of the Israeli people in the country.

However, there are two sides to the joy. Orthodox Jews, who do not consider Jesus the Messiah, believe the Jewish Messiah is about to make His appearance. Christians and Messianic Jews are awaiting the second coming of Jesus (Yeshua) to establish the final stage of Israel: The thousand-year reign, then eternity in ultimate Promised Land of Heaven.

For just $10 per month you can bring the gospel to 1,000 homes. Join us as media missionaries! GIVE NOW
VIEW COMMENTS
« Reaching the Lost through the Messianic Jewish Bible Institute Indian Dance Crew Is Going To Hollywood With Dwyane Wade’s Golden Buzzer »