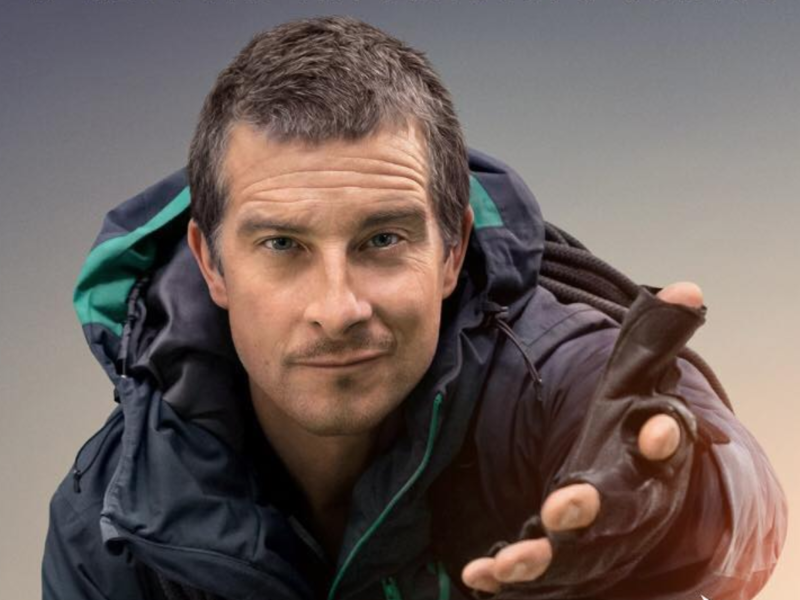 Everybody’s favorite adventurer Bear Grylls is back with a new interactive survival series, You Vs Wild. In it viewers are given either or options on how to proceed in a life-threatening situation… “And if you don’t make the right choice it might not end well,” says Bear. “You decide!”

Making the right choices in life is an essential element to survival and Bear has certainly shown us how to survive in some of the world’s toughest terrains.

While learning military survival skills in the Special Air Service (SAS) of the British Army Bear overcame many challenges. Since then he has climbed Mount Everest, circumnavigated the UK on a jet ski, crossed the North Atlantic on a boat to name a few of his exploits.

Of course, he has also been featured on many different reality TV series. These include The Island; Born Survivor; Ultimate Survival, Man vs Wild, Get Out Alive, Escape From Hell, Worst-Case Scenario and now You Vs Wild. He has written several best-selling books including his autobiography, Mud, Sweat and Tears,  A Survival Guide To Life and True Grit.  Today there is even a Bear Grylls survival theme park in the UK.

Prepare for an interactive journey like no other as you choose your own adventure with @BearGrylls in the new @netflix series #YOUvsWILD. pic.twitter.com/NWMtP9GWq1

Like the new You Vs Wild series we have an either / or choice to make. It’s a choice between life and death, good and evil. God gives us a choice to serve Him by receiving His son as Lord and Savior or going our own way which is the path of sin that leads to death.

In Deuteronomy 30:19 God says, “I have set before you life and death, blessing and cursing; therefore choose life.” It’s a simple choice and He even gives us a clue to the answer. Choose life!

In John 14:6 Jesus says, “I am the way and the truth and the life. No one comes to the Father except through Me,” Choose to follow Jesus and become a child of our Heavenly Father.

This is a decision Bear has already made. He accepted Jesus as a boy, though he became disillusioned with religion. However, he soon learned that following Jesus is the greatest adventure one can have in life. Bear committed his life to Jesus and openly shares his faith. He has been a prominent spokesperson for the Alpha Course and has shared his testimony on CBN.

Bear discovered that Jesus is the most radical person that ever lived and that there is a strong link between survival and life. One of his favorite Bible verses is Matthew 5:3 in the Message Bible: “You’re blessed when you’re at the end of your rope. With less of you there is more of God and His rule.”

“Together you and I are going to find our way back to civilization,” Bear says in the You vs Wild promo video. May you find your way back to God as well. He sent His only Son so that if you believe on Him you will not perish but have eternal life.

That is the ultimate life-saving skill you can learn from Bear, as found in John 3:16 –  Jesus saves!

This is going to be a journey unlike any I’ve EVER embarked on before. I need YOU to think ahead, choose wisely, and most importantly, never give up. 💪 Check out my instagram story now to see where YOUR adventure begins #YOUvsWILD @netflix #interactive

For just $10 per month you can bring the gospel to 1,000 homes. Join us as media missionaries! GIVE NOW
VIEW COMMENTS
« Passover: God’s Purposes and Redemption for Humanity! Join a FREE Group Christian Coaching Session! »