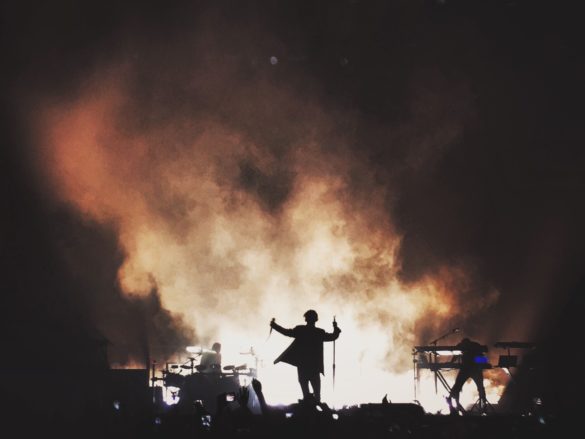 The most incredible illusion is that the deceiver has made it a reality to the world. Many names have been associated with the greatest deceiver throughout the centuries. The people of GOD have known him since the beginning of time. Satan has made an art expediting his dark agenda throughout generations. One powerful lie contributing to the grand illusion is that he does not exist. Many churches through various denominations thrive from selling heaven while evading the truths about hell. Others either blame Satan for everything or nothing at all. This is spiritual warfare!

Satan has built a dark kingdom that surrounds us. We live and work in a society that has aided in his dark plan. The divine chess game was played before the dawn of time and continues even today. The fight for souls has always been the highlight and focus of the battle of good versus evil. However, Satan has placed his four horns within the world and has worked in the background to continue gaining ground in this world as he manufactures a dominion.

Satan will claim his throne before our eyes through the faithless and establish a dynasty within the four horns! In Zechariah 1:18, we will see “four horns“; the four horns signify power. Each horn represents a major branch of life or a field of professional vocation through which satan operates. They are not hidden to those with the gift of discernment which is vital in spiritual warfare.

If we look carefully and examine the divine forecast by John in Revelation: the Revelation of Jesus Christ is conveyed to him through prophetic visions that include two beasts, a dragon and the dead. First, however, we must ask ourselves, how did these dark entities gain such a fortified footing in our society throughout our past, present, and future?

Education, Finance, Religion, and Government have always been the professions sought after by the agents of darkness. In the Book of Revelation and the Book of Daniel, we see a beast with multiple heads and horns. The numerous heads represent various organizations and entities; the horns represent secular power. “Then I looked up, and there before me were four horns. I asked the angel who was speaking to me, what are these? He answered me; these are the horns that scattered Judah, Israel, and Jerusalem. Then the Lord showed me four craftsmen. I asked, “What are these coming to do?” He answered, “These are the horns that scattered Judah so that no one could raise their head, but the craftsmen have come to terrify them and throw down these horns of the nations who lifted up their horns against the land of Judah to scatter its people.” (Zechariah 1:18-21)

We must carefully consider if these “Four Craftsmen” are indeed the “Four Horsemen of the Apocalypse.” They will surely scatter the believers across the world as they wield tremendous power while promoting the antichrist and persecuting the “people of GOD!”

The world in this current era is obscure and plagued with polytheism, agnosticism, atheism, hate, bigotry, and violence. Nevertheless, it has become acceptable and a part of life for the masses despite the abnormal morality. This fluid perception clearly shows that the dark forces have advanced their destructive agenda. Education, Finance, Religion, and Government have come to demand assimilation into this spiritually clandestine agenda. Spiritual warfare has been declared, hidden before our eyes through everyday life.

Education will be the access to reprogram societies globally with a dark curriculum. Finance will compromise the faithful, leaving believers broken and despaired when they cannot purchase innate needs and continue fleshly vices. We must walk in the “Spirit” and not the “Flesh.” “So I say, walk by the Spirit, and you will not gratify the desires of the flesh.” (Galatians 5:16)

The moral philosophies Jesus left the world will become forbidden; an ancient Apocrypha redrafted by poor interpretation of scripture by false prophets promoting the antichrist as he becomes the forerunner for the dragon. The dark agents will deliver evil as a new religion that will become rampant.

Lastly, the government will weaponize this new Religion and compel believers to denounce our faith—the faith of adoration and liberty for the ways of enslavement and predatory tenancy. The end of humanity as we know it will evolve into a distant memory.

A diligent and well-versed Christian understands that Satan is a skilled and cunning adversary, a tactician in his approach and methods. However, even the well-keened Christian may not see him coming on occasion. Therefore, the gift of discernment is one of our practical tools in the arsenal GOD has provided in our fight with the unseen darkness surrounding us through spiritual warfare.

“Christ’s mandate to us that we become “wise as serpents and harmless as doves” implies that we must develop discernment, the ability to detect motivation, and the spirits that motivate. The gift of discerning the spirits will become increasingly important as we approach the end of this age because deception will be the hallmark of these extremely dangerous times.” (Matthew 10:16)

We are called to be diligent, walk in the Spirit, and fight the good fight!