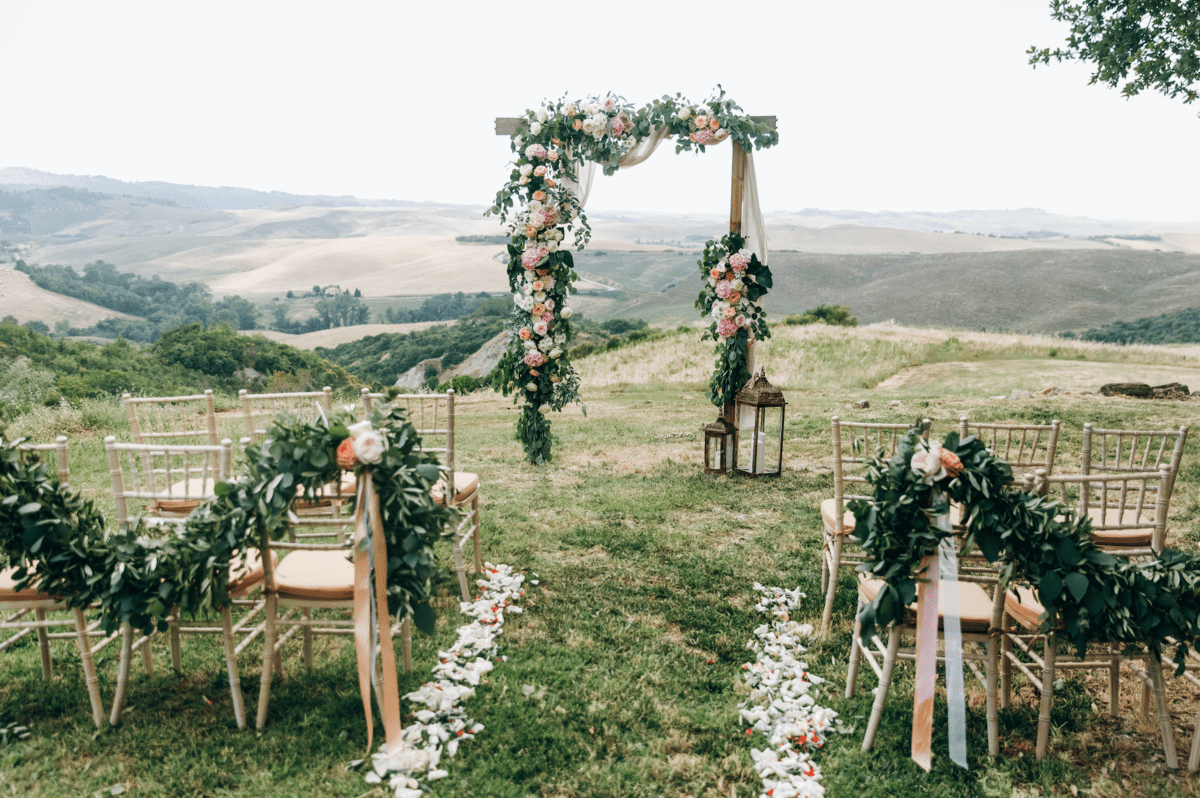 It began with a flash of a wedding being held in an elegant ballroom.  I knew all the preparations had been made, and the time for the big day had arrived.  I entered the ceremony and tentatively began my march down the aisle.  Suddenly, I realized my two-piece dress was having issues.  The bottom piece, the high-waisted skirt, kept slipping down as I walked.  I was completely embarrassed, knowing all eyes were on me.  However, I kept walking toward the altar and my waiting groom, trying to appear casual as I kept pulling the dress up as I went.

As the ceremony began, it became clear that the head wedding planner was also the officiant, who had other employees running around handling the details.  I dismissed this thought as we continued in to the vows portion of the ceremony.  Suddenly, tuxedoed waiters entered the room and started to serve the guests lobster as they sat in the audience.  Baffled, the wedding planner/officiant stopped the vows and left to investigate the problem.

The groom and I waited patiently at the altar, nervously wondering what was going on.  After a few moments, the guests began to get up and leave the ballroom.  They were headed into another part of the hotel where dinner was to be served.  The waiters were taking the food in there, and it seemed the lobster feast couldn’t wait.  I watched perplexed as all of our guests left us at the altar, and we hadn’t even finished the ceremony.

This felt like such a strange betrayal and was quite difficult to wrap my mind around.  It was then I noticed the bridesmaids.  They had spotted themselves in a wall of mirrors and were occupied obsessing over how they looked.  All of them were twirling in their dresses, swishing their skirts, and gazing admiringly at themselves.  This was almost too much to bear.  These were supposed to be our friends, the closest of the close. Yet they couldn’t care less that the vows had not been finished.

My frustration continued to grow, as I viewed the selfishness of all parties, only thinking of themselves.  I began to vent that we should forget the ceremony, because no one cared about that part anyway.  I thought we should get married later at the justice of the peace and might as well go enjoy the party. As I began to wake, a feeling of sadness came over me. I saw the two of us still standing alone at the altar.

First and foremost, it excites me to think that King Jesus, our Groom, is prepared and ready.  In fact, He is already standing at the altar. The location where we will eventually enter into the most beautiful, eternal covenant with Him!  It was also comforting to see that His Bride is fully dressed and actively headed towards that commitment as well.

I believe the matter of the dress has two important interpretations.  The area around our waist is supposed to be guarded by the belt of truth.  This piece of our armor is the one that holds weapons and keeps the other pieces in place.  While it may be slipping here and there, the Bride is aware of its placement and is readjusting as necessary, establishing truth as she proceeds.  I believe it is vital that we continue to gird up our loins with truth!

The second angle on this could be that the Bride is adjusting her skirt in order to free up her legs to run.  Historically, warriors would have to adjust and fasten their garments of the day (robes), so they could move easily and quickly as they ran and fought.  Could it be that this posture of the Bride is signaling a moment when we are to be freeing up our lives and preparing for battle?

Finally regarding the Bride, her posture of frustration may be telling.  Rather than an attitude of understanding and  a desire to bring the others along, she seems to want to flush the whole thing and just perform the expedient, legal ceremony later.  That way, she won’t have to deal with the people and can just be alone with the Groom.

The wedding planner and officiant seem to represent some sort of religious authority, as well as those that are supposed to be helping us prepare for this most momentous of all days.  While present and participating, the lack of authority to keep the guests in place as well as the departure from the altar, leads me to believe they are not fulfilling their responsibilities in this hour.

Now we come to the guests who have been invited to the wedding day.  While they have dressed up and arrived on time, their posture is revealed by their insatiable reaction to dinner.  They could not be troubled to witness the vows when there was food available.  This may indicate some sort of survival instinct that looms larger than the event at hand.  To make matters more interesting, they were set to feast on lobster.  This represents the best the world has to offer, but it is traditionally considered unclean to eat because of its role as a bottom-feeder.

Next, we have the bridesmaids.  These are the women selected to walk alongside the Bride in this process. They are to help, as well as celebrate, every part of this occasion.  There can be no greater affront than when a bridesmaid is revealed as one who is self-absorbed, who cares less about the couple and more about herself.  What was supposed to be a position of honor seemed to turn into a place of self-promotion instead.

A further note on these two groups. I believe they could represent the Word movement (guests – desire to feast on the Word) and the Spirit movement (bridesmaids – desire to have charismatic experiences).  I remember hearing R.T. Kendall speak of a time coming when these movements converge. That it will be a move the likes of which we have never seen.  He was repeating a similar forecast given by Smith Wigglesworth that when these two groups come together, it would eclipse the Wesleyan and Welsh revivals and spread the gospel all over the world.

Is it possible our Father has already planned the wedding of the ages, and that Holy Spirit is stirring and speaking in this direction?  Could it be that our Bridegroom Jesus is longing to be with us in ways we cannot even fathom?  How He desperately wants all of us in the wedding party to get in our rightful places, that the wedding of all weddings may commence!

Read Also: In This Season Of The Great Contradiction, What Do You See?