"Because the Jews Ruined Christmas" 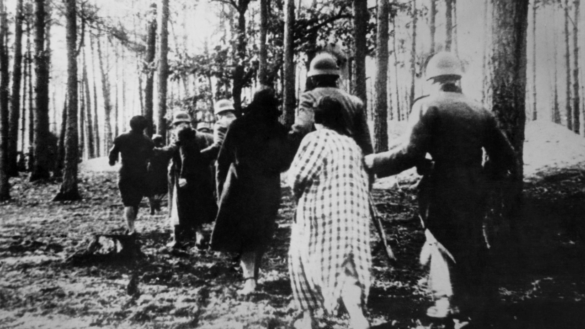 A group of third-grade children at Watkins Elementary School in Washington, DC, were forced to re-enact situations from the Holocaust last Friday. At an unidentified staff member’s direction, the mostly eight- and nine-year-old students were made to pretend to dig mass graves, shoot victims, and one Jewish child had to pretend to be Hitler and commit suicide as Hitler did at the end of the exercise.

According to parents and officials, the staff member approached the students, who were in the library on a self-directed project, and forced them to re-create scenes from the Holocaust, telling them that the Germans were angry “because the Jews ruined Christmas.”

“There was a lot of sobbing and crying and distress, and then momentarily we got an email (from the school’s principal) to say that the children had re-enacted the Holocaust,” one parent told a DC news outlet. “This included the trains, dying in gas chambers, playing Hitler and mass graves.”

The staff member allegedly made antisemitic comments during the exercise with the students. The teacher also supposedly told the children not to tell anyone about the re-enactment, but they told their homeroom teacher (as well they should!!).

“I want to acknowledge the gravity of this poor instructional decision, as students should never be asked to act out or portray any atrocity, especially genocide, war, or murder,” Watkins’ principal M. Scott Berkowitz said in his email to the parents.

“I think it’s traumatic; this is a terrible corruption of a historical trauma that was inappropriate for eight- and nine-year-olds to learn about in this way, and I am outraged,” one mom told the media.

The DC Public Schools’ Central Equity Response Team has received a complaint about the incident. They said it “was not an approved lesson plan, and we sincerely apologize to our students and families who were subjected to this incident.”

All of the students received mental health counseling, and the staff member has been placed on leave.

As we have written about in recent months, antisemitic attacks and incidents are on the rise in America and across the globe. There have been several other antisemitic incidents in the DC area over recent months. A fraternity house at George Washington University was vandalized, and a Torah scroll was torn and covered in detergent. Also, at Woodrow Wilson High School in northwest DC, swastikas and the N-word were scrawled on the walls in early December.