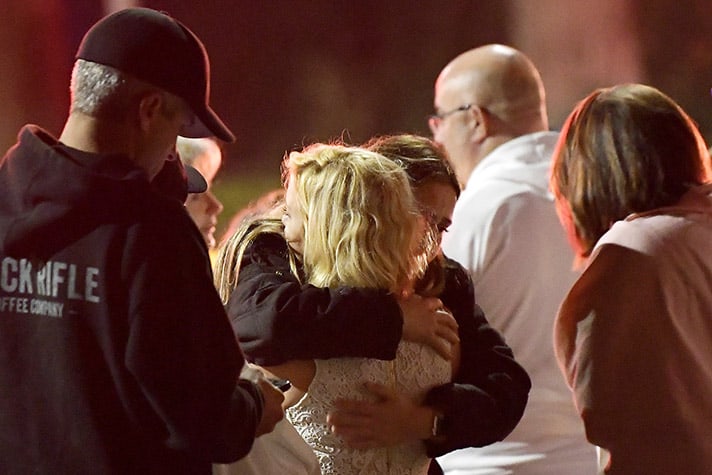 Billy Graham Rapid Response Team chaplains are on-site in Thousand Oaks, CA sharing hope amidst tragedy. This is where a gunman opened fire at the Borderline Bar & Grill. News reports indicate that 12 people, including a law enforcement officer who responded, were murdered in the attack. The gunman also died. (Read more about the shooting)

“Words can’t begin to describe the pain of such a sudden and brutal attack,” said Jack Munday, international director of the Billy Graham Rapid Response Team. “We are grieving alongside the families of those killed and wounded in this horrific tragedy. We will be there to offer emotional and spiritual care, and the hope and compassion of Jesus Christ, in the days ahead.”

The deployment to Thousand Oaks is the fourth shooting-related response in recent days for the ministry. Crisis-trained Billy Graham Rapid Response Team chaplains also comforted mourners following attacks at the Tree of Life Synagogue in Pittsburgh, PA and at Butler High School in Matthews, NC (which is just minutes from the BGEA headquarters in Charlotte, NC), over the past two weeks.

Franklin Graham, president and CEO of BGEA, appealed for prayer on his Facebook page, saying, “Would you lift up in prayer all those wounded and the families whose loved ones were killed in a shooting in Thousand Oaks, California, last night?”

In addition to the recent shooting-related deployments, the Billy Graham Rapid Response Team currently has chaplains in multiple areas across the southeastern United States following the incredible devastation of Hurricanes Florence and Michael, including New Bern, Jacksonville and Wilmington, NC; Albany, GA.; and Wewahitchka, FL.

For more information on the ministry, visit www.billygraham.org/rrt.

The Billy Graham Rapid Response Team was developed by Franklin Graham and the Billy Graham Evangelistic Association following the attacks of Sept. 11, 2001. It has since grown into an international network of chaplains in the USA, UK, Canada and Australia who are specifically trained to deal with crisis situations. They have deployed to more than 300 disaster sites, including shootings, floods, hurricanes, wildfires and tornadoes.

This article was written by Erik Ogren of BGEA

For just $100 per month you can bring the gospel to 10,000 homes. Join us as media missionaries! GIVE NOW
VIEW COMMENTS
« Are We Any Different Than The World? A Prayer To The Promise Keeper, Healer, Deliverer, Lord Of All »