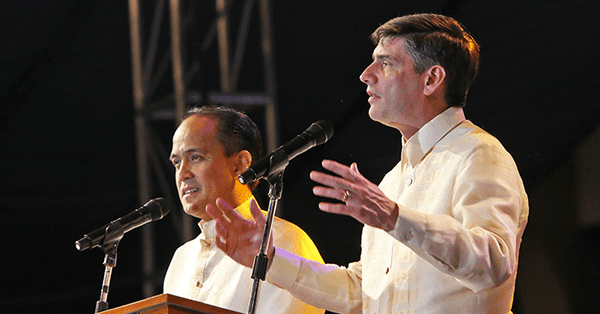 Evangelist Will Graham – grandson of the late Billy Graham – returned to the Philippines in February to hold an eight-day, nine-event evangelistic campaign that took place in multiple locations in and around Manila. The Greater Pangasinan-Metro Manila Celebration with Will Graham was held Feb. 9-17, and included a two-day outreach at the Narciso Ramos Sports Complex in Lingayen, Pangasinan, followed by three special events for teens, government/military leaders and marketplace leaders, and culminated with a three-day, four-event series at the Quirino Grandstand at Manila’s historic Rizal Park.

All told, 149,656 people attended the Greater Pangasinan-Metro Manila Celebration with Will Graham.

“Jesus, the Son of God, came for one reason: to transform your life by dying on the Cross for your sin and my sin,” said Graham from the stage during one of the outreaches. “Everything points to the Cross. The Cross is the most significant event in human history. It can change your life tonight.”

More than 19,400 responded to Graham’s invitation to make a commitment to Jesus.

“This is amazing. I’m sure that there will be an exponential result and impact of the Gospel to the Filipino people,” said Bishop Noel Pantoja, general chairman of the Greater Pangasinan-Metro Manila Celebration and national director for the Philippine Council of Evangelical Churches. “People are receiving hope in the Lord Jesus Christ. The Gospel has come just in time, giving hope to the Filipino people.”

The Greater Pangasinan-Metro Manila Celebration with Will Graham marked the first time that all three generations of Graham evangelists have preached from the same venue in the same city. Will’s grandfather, Billy Graham, preached a Crusade at Rizal Park in 1977 and Will’s father, Franklin Graham, held an evangelistic Festival in 2006 in the same location.

The Greater Pangasinan-Metro Manila Celebration has come to an end, but we still need your prayers for those that responded to the Gospel over the last several days! God bless you! #ManilaCelebration #Pray pic.twitter.com/QvT109gLoB

Two milestones were reached during the campaign in the Philippines. During the opening weekend in Lingayen, Pangasinan, total cumulative attendance at Graham’s evangelistic outreaches over the course of his ministry reached and exceeded the one million mark for the first time. More important, the cumulative number of people making spiritual decisions for Christ since Graham began his evangelistic ministry topped 100,000 at the Saturday morning children’s event in Manila.

This was Graham’s third trip to the Philippines to hold multi-day outreaches. He first preached in the Bicol region of the Philippines in 2011. He returned in 2015 to preach in Cebu and Tacloban following the deadly Typhoon Yolanda.

The Greater Pangasinan-Metro Manila Celebration was the first evangelistic outreach for Graham in 2019. Yet to come this year will be international efforts in Albania and Canada, and domestic Celebrations in Kaua`i, Hawaii, as well as Helena, Great Falls and Hamilton, Montana.

About the Billy Graham Evangelistic Association

The Billy Graham Evangelistic Association (BGEA) proclaims the Gospel of the Lord Jesus Christ throughout the world by every effective means available. From its headquarters in Charlotte, N.C., the BGEA directs a wide range of domestic and international ministries, including: large-scale festivals led by evangelists Franklin Graham and Will Graham; The Billy Graham Library; The Billy Graham Training Center at The Cove, located outside of Asheville, N.C.; SearchforJesus.net, an Internet evangelism project reaching thousands of people for Christ online; and many others through print, television, telephone, radio and the Internet. For more information, visit BillyGraham.org. Get news updates on Twitter at Twitter.com/BGEAnews.

For just $100 per month you can bring the gospel to 10,000 homes. Join us as media missionaries! GIVE NOW
VIEW COMMENTS
« Devotion For Today – God’s Provision For The Journey Boyfriends: What They Get And What They Don’t »