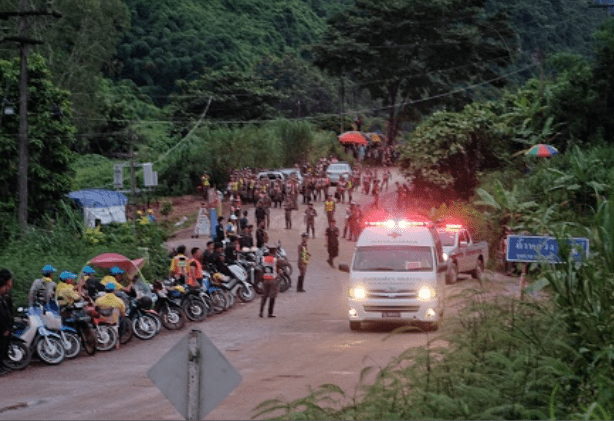 Following our GODTV.com post calling for Christians to pray for the youth football team and their coach trapped 4km under the earth in a cave in Northern Thailand, well over 150,000 people have responded. We are thankful to all who are standing with these boys in prayer to see them come home safely. Eight of the boys are already safely rescued which is amazing and we continue to trust God that the others will be rescued in the next 24 hours.

It is wonderful how this miracle rescue has touched the lives of so many of our readers and how they have liked and shared this call to pray on social media. Many have also posted passionate prayers for the boys on GOD TV’s Facebook Page. Just some of these include:

Let’s not underestimate the enormous power of prayer and keep praying for this daring rescue attempt taking place right now as the remaining  boys are escorted by divers through submerged tunnels to safety.

It’s commendable that so many countries are supporting the rescue attempt, with an extraordinary team of international divers in place,  led by the British divers who initially found the boys and their coach after days of searching the flooded cave complex of Tham Luang Nang Non in Northern Thailand.

“There has never been an assembly of diving experts like this,” said Israeli diver Rafael Aroush who is playing a supportive role in the boy’s great escape along with other volunteers from Israel. This is not surprising as Israel is often first to send help during times of crisis.

“But, even with the most expert people in the world we have already lost a diver,” says Rafael, “so you know how hazardous this entire operation is. We are all praying for the safety of the boys that they will all get out safely”.

This is an almost impossible task, to take boys who have never dived before, let alone swim and guide them back to the surface via narrow flooded passageways in zero visibility and with very little room to move especially while using oxygen tanks. However four boys are already out which is highly encouraging for the remaining members of the team.

Each boy will have a diver either side of him and there will be times when the tanks have to be removed just to get through the narrowest of openings in the quest for freedom.

God gives us the promise in Psalm 50:15, “Call on me in the day of trouble; I will deliver you, and you will honor me.” We continue to call upon God for the remaining boys still in the cave and their coach, interceding that God will save them from their ordeal and that He will also save their souls.