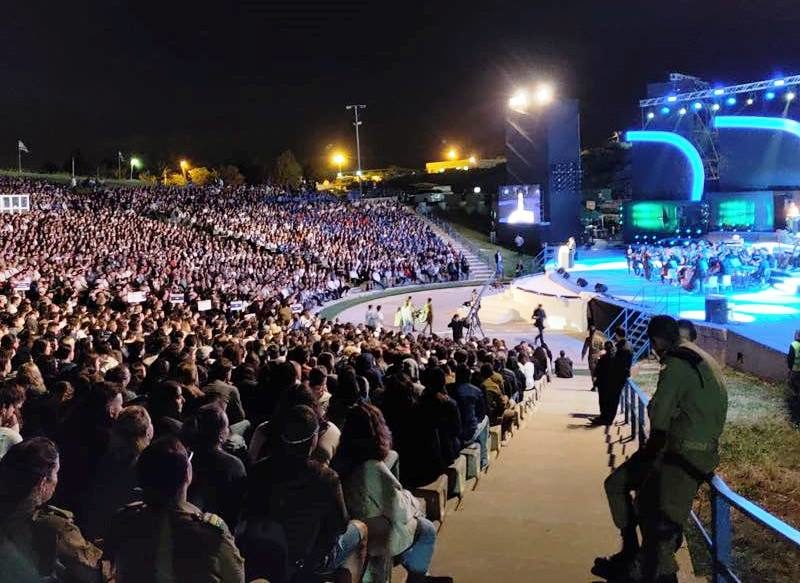 Thousands of young Jews and community leaders from around the world gathered on Tuesday night on the eve of Yom Hazikaron, Israel’s day of remembrance for its fallen soldiers and victims of terrorism, at the Latrun military museum and participated in Masa Israel Journey’s memorial ceremony.

This was the only English-language ceremony in Israel and was broadcast to thousands of Jews in communities and schools in the US, Canada, South Africa, Uruguay, Ukraine, France, Germany, Australia, and England. It was also translated into French, Spanish, and Russian.

The ceremony, which has been taking place for more than a decade, focuses on the contribution of the individual soldiers and graduates of Masa to the Israeli story, in order to connect the participants in a tangible way to the moments of the Israeli nation.

Masa participants have described the Yom Hazikaron ceremony as one of the most impactful and profound experiences during their time in Israel.

The stories of Alejandro Hoffman, Sean Carmeli, Jordan Ben Simon and others, Olim who were killed while serving in the IDF or in a terror attack, were highlighted through videos and anecdotes from their families and friends.

Sean Carmeli’s family was in attendance. He was killed in Gaza during Operation Protective Edge. He was a lone soldier and had no one to attend his funeral. Messages on the issue went out throughout the country. Some 20,000 Israelis arrived in Haifa in the dead of night to accompany him on his last journey. None of them have heard of him before that night.

Israel’s Minister of Public Security and Strategic Affairs Gilad Erdan stated that “in an age where terror targets our homes and synagogues, and when we face new and old forms of anti-Semitism on the streets and on campuses,” we stand together.

“The longing for those who’ve been taken from us far too soon, for their smile, their laughter, their embrace. These are the fragments of memory that can never be put back together. We long for our loved ones who fell in battle, and for those who were the victims of terror and anti-Semitic hate, In Israel, San Diego, Pittsburgh, Paris and around the world,” said Isaac Herzog, Chairman of the Jewish Agency and Masa’s honorable guest at the Latrun Ceremony. “We can never put the fragments back together, but we can renew our resolve to cherish their memory and honor their legacy.”

“This ceremony allows the young Diaspora to be true partners on a day that has tremendous weight in the life of Israeli society. The ceremony has become an important way for Diaspora Jews to mourn the loss of soldiers and victims of terror alongside Israelis,” said Masa Israel Journey CEO Liran Avisar Ben-Horin.

“Masa brings thousands of participants from dozens of countries all over the world to experience the Israeli reality during the impactful times of Yom Hazikaron, and Yom HaShoah (Holocaust Remembrance Day) and Yom Ha’atzmaut (Israel Independence Day). These events continue to strengthen the connection of the Diaspora with the State of Israel,” she added.

For just $100 per month you can bring the gospel to 10,000 homes. Join us as media missionaries! GIVE NOW
VIEW COMMENTS
« Study Bible: How to Choose the Right One Does Iran Plan to Attack the US in the Persian Gulf? »