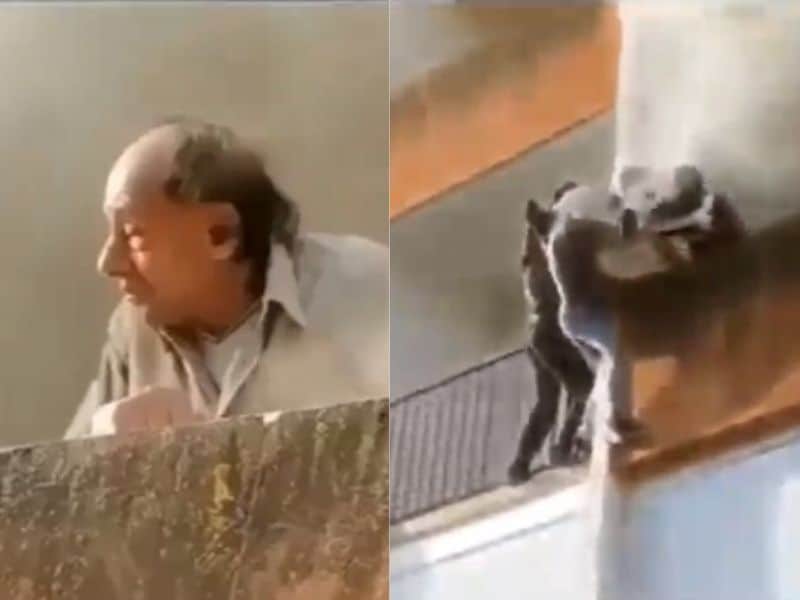 An elderly man trapped inside a burning building compelled three friends to take a risk. The three men braved the fire and successfully rescued the old man, beating the firemen to it.

Trapped in a burning building

Last April, a fire broke out inside a seven-story building in France. Because of his physical impairment, one of its residents wasn’t able to escape in time. Fortunately, Dombaev Dzhambulat, Ouloubaev Aslan and Ahmedov Muhsinjon passed by the area. The screams and tension from the neighborhood caught their attention.

Then, they noticed the elderly man on his balcony. He was obviously scared for his life. Dzhambulat didn’t wait for another second to help out. “I did not have time to be afraid. I had to just go,” he said.

Immediately, they piled up the trash cans and went up to the man. “I’m scared, I’m scared, I can’t walk,” the old man told Dzhambulat. Because of this, Dzhambulat had no choice but to enter into the smoky balcony and carry the man. With Aslan’s help, they were able to transfer the elderly man to the adjacent balcony.

(Seine-et-Marne, France): On April 15th, Dombaev Dzhambulat, Ouloubaev, Asla and Ahmedov Muhsinjon, three friends originally from the Russian Republic of Chechnya, were at a park in the French area of Montereau-Fault-Yonne, when they noticed a panicked elderly man trapped on his 3rd floor balcony. Without hesitation, they scaled the walls and rescued the elderly man who is disabled right before firemen got to the scene. Dzhambulat said elderly man said to him, “I am scared. I am scared. I can’t walk.” When asked of HIS bravery, Dzhambulat responded, “I did not have time to be afraid, I had to just go.” #heroes

Thankfully, firemen finally arrived to the scene. They took the men down from the third floor of the building and put the fire out.

When asked of his courageous act, Aslan did not consider his actions as heroic. “I saw an old person in the wrong and I did not hesitate to climb. I was not afraid because it is not the first time that I have rescued people,” he said. The same is true with Dzhambulat and Musinjon.

While Dzhambulat and Aslan have been living in France for 7 and 9 years respectively now, they hoped to be residents of the country. They came from Russian Republic of Checnya. “I’ve been dreaming about this for 7 years, all I want is to live as a simple person,” Dzhambulat stated.