BREAKING
Israel-led Team Solves Mystery Why Lightning Strikes Fewer Times Over The Ocean...
Tourism In The Holy Land Is Soaring Back Up To Pre-Pandemic Highs
Lapid Speaks Directly To Palestinians—Offers Them “Another Way” Out Of The Ongoing...
Home Articles Thrilling Finds Spanning Thousands Of Years Uncovered In Judean Desert 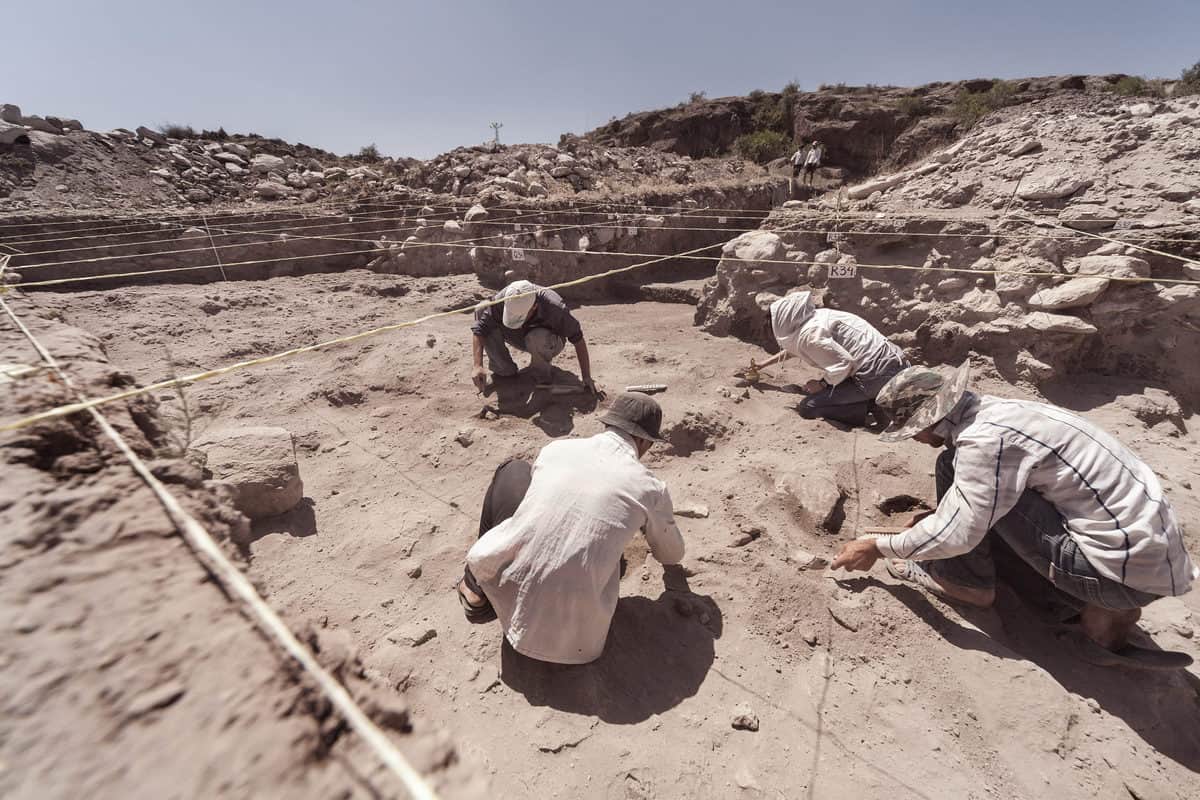 Rare and thrilling archeological finds, including dozens of fragments of a biblical scroll from the Bar Kokhba period 1,900 years ago, a 6,000-year-old skeleton of a child, and the oldest complete basket in the world, were recently discovered by an Israel Antiquities Authority (IAA) team in the Judean Desert during an operation aimed at preventing looting of antiquities in the area.

This was the first time in approximately 60 years that archaeological excavations uncovered fragments of a biblical scroll. The scroll, which is written in Greek, includes portions of the Books of the Twelve Minor Prophets, including the books of Zechariah and Nahum.

The fragments of the bible were written, uniquely, by two different scribes.

“These are the things you are to do: Speak the truth to one another, render true and perfect justice in your gates. And do not contrive evil against one another, and do not love perjury, because all those are things that I hate—declares the Lord.”

These verses, written on dozens of parchment fragments, from Zechariah 8:16–17, were discovered in a cave where Jewish refugees hid almost 1,900 years ago.

Also identified, on another fragment, are verses from Nahum 1:5–6, “The mountains quake because of Him, And the hills melt. The earth heaves before Him, The world and all that dwell therein. Who can stand before His wrath? Who can resist His fury? His anger pours out like fire, and rocks are shattered because of Him.”

When comparing the text in the discovered fragments to the text known to us from other versions of the text, including the verses known in the Masoretic text, numerous differences are notable, some of which were quite surprising. These differences can tell us about the transmission of the biblical text up until the days of the Bar-Kokhba Revolt in 130-135 CE, documenting the changes that occurred over time until reaching us in the current version.

Another exciting aspect about this scroll is that despite most of the text being in Greek, the name of God appears in ancient Hebrew script, known from the times of the First Temple in Jerusalem.

To date, 80 km of desert caves have been surveyed. The complex and challenging national-archaeological operation undertaken by the IAA on the cliffs of the Judean Desert since 2017 is meant to prevent antiquities looting. The operation included employing drones and reaching virtually inaccessible caves with the aid of rappelling techniques and mountain-climbing equipment.

The scroll fragments recently discovered were retrieved from the Cave of Horror in the Judean Desert reserve’s Nahal Hever by clinging to ropes between heaven and earth. The cave, roughly 80 meters below the cliff top, is flanked by gorges and can only be reached by rappelling precariously down the sheer cliff.

Additional finds left behind by the Jewish rebels who fled to the caves at the end of the Bar Kokhba Revolt include a cache of coins from the Revolt bearing Jewish symbols such as a harp and a date palm, arrow- and spear-heads, woven fabric, sandals, and lice combs.

Another astounding discovery found near the rock wall inside the Cave of Horror was a 6,000-year-old partially mummified skeleton of a child.

Prehistorian Ronit Lupu of the IAA recalled that “on moving two flat stones, we discovered a shallow pit intentionally dug beneath them, containing a skeleton of a child placed in a fetal position. It was covered with a cloth around its head and chest, like a small blanket, with its feet protruding from it. It was obvious that whoever buried the child had wrapped him up and pushed the edges of the cloth beneath him, just as a parent covers his child in a blanket. A small bundle of cloth was clutched in the child’s hands.”

The child’s skeleton and the cloth wrapping were remarkably well preserved and because of the climatic conditions in the cave, a process of natural mummification had taken place. The skin, tendons, and even the hair were partially preserved, despite the passage of time.

A preliminary study of a CT scan of the child suggests that this child was 6-12 years old.

Another find, currently unparalleled worldwide, is a huge intact basket with a lid that was also exceptionally well preserved due to the high temperatures and extreme aridity of the region.

The basket dates to the Pre-Pottery Neolithic period, approximately 10,500 years ago. This is apparently the oldest basket in the world that has been found completely intact and its importance is therefore immense.

The basket had a capacity of 90–100 liters and was apparently used for storage. The basket provides fascinating new data on the storage of products some 1,000 years before the invention of pottery.

The basket is woven from plant material and its method of weaving is unusual. When it was found it was empty, and future research of a small amount of soil remaining inside it will help discover what it was used for and what was placed in it.

Since the Dead Sea Scrolls were discovered over 70 years ago, the desert caves have been targeted by antiquities looters. The climatic conditions inside the caves have enabled the exceptional preservation of scrolls and ancient documents, which are cultural heritage assets of immense importance. As such, they are sought after by cave looters, who damage the caves and destroying historical evidence.

“The aim of this national initiative is to rescue these rare and important heritage assets from the robbers’ clutches,” says IAA’s director Israel Hasson, who launched the national operation. “The newly discovered scroll fragments are a wake-up call to the state. Resources must be allocated for the completion of this historically important operation. We must ensure that we recover all the data that has not yet been discovered in the caves, before the robbers do. Some things are beyond value.”

Avi Cohen, the Director-General of the Ministry of Jerusalem and Heritage, said that the scroll fragments containing biblical texts, the coins and the additional finds from the Second Temple Period “directly attest to the Jewish heritage of the region and the inseparable bond between the Jewish cultural activities and our place in this land.”