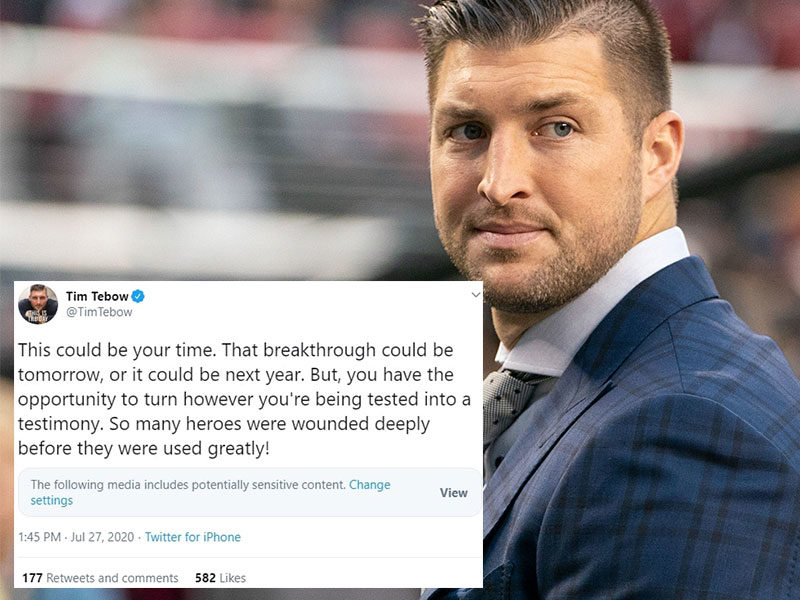 A video tweet last Monday by former NFL quarterback Tim Tebow talking about the Bible and the Word of God was marked as “sensitive content” by Twitter.

Tim Tebow is known not only for his athletic ability but also for being outspoken about his Christian faith. Today, he is married to Miss Universe 2017 Demi-Leigh. And he continues to inspire and impact millions as he faithfully walks in the purposes of God for his life.

On Monday, he shared a video on Twitter. He posted an inspirational video “educating his followers about God’s word in the Bible.” However, his followers noticed that the video was marked as “sensitive content.”

“Bible believers, when we look at the Bible, and we see a lot of the heroes, a lot of times they truly were wounded deeply before they were ever used greatly. So maybe you’re going through a time in your life where you feel like you’ve just been wounded greatly. It hasn’t been your year, hasn’t been your day — you just don’t feel like this is your time.”

Additionally, Tim encouraged, “You never know what God is doing with your life. You never know what he is preparing you for. So many times in the Bible when we look at the heroes, there were times in their life where — if they stopped, if they quit, if they said, ‘No, God, I’ve had enough’ — then they would have missed out on the most impactful, most influential times of their life.”

He ended with a reminder to trust God’s great love and to entrust the unknown future to Him. Knowing God’s character and “how much He loves us” will get us through the tough times.

This could be your time. That breakthrough could be tomorrow, or it could be next year. But, you have the opportunity to turn however you’re being tested into a testimony. So many heroes were wounded deeply before they were used greatly! pic.twitter.com/ldTu5acIDO

“The Tweet … was flagged as potentially sensitive media in error. It has been corrected,” the company said.

According to FOX NEWS, “It wasn’t clear what part of the video was particularly sensitive to trigger the warning.”

For just $100 per month you can bring the gospel to 10,000 homes. Join us as media missionaries! GIVE NOW
VIEW COMMENTS
« Sean Feucht Invites California Governor To Worship With Them On State Capitol Justin Bieber Preaches To 143 Million Followers: “Jesus Is Our Hope” »