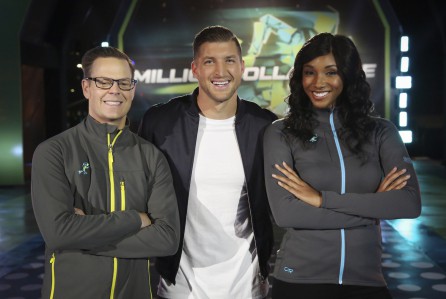 $1,000,000 is at stake for the new show, Million Dollar Mile coming to CBS! With NBA star LeBron James as Executive Producer and Tim Tebow hosting, you’re sure to be in for something great.

Major streets in a large US city are shut down with numerous obstacles to overcome. Competitors are given a heard start…but are chased by world-class athletes trying to stop them from winning the prize money.

It’s ten episodes of a, “high stakes competition that challenges everyday athletes’ physical and mental toughness like never before with an opportunity to change their lives forever.” Said to be an, “unprecedented television event series,” it won’t disappoint.

Tim Tebow will be the host and face for Million Dollar Mile guiding competitors and viewers through the challenging courses. He said, “Watching good people compete at their highest ability is always inspirational to me.”

He continued saying, “Million Dollar Mile is a show…that motivates, thrills and is aspirational. And I’m excited to be hosting this show.”

Joining Tim as commentators are the talents of ESPN’s Maria Taylor and Matt “Money” Smith, the play by play voice of the Los Angeles Chargers.

Get ready to run because $1M is on the line! #MillionDollarMile premieres March 27 at 9/8c on #CBS! pic.twitter.com/53ehqcELxu

Tim has had a media blitz the last few weeks. The all-American world class act we’ve grown to love is being featured on Fox & Friends and Good Morning America.

From talking about his engagement to Demi-Leigh Nel-Peters, to promoting his upcoming movie, Run the Race releasing this Friday in theaters, and reaching over 100,000 honored guests in one night with “Night to Shine.” All while preparing to play another season of baseball with a chance to go to the Pros.

Watch this interview giving you all the latest details:

For just $100 per month you can bring the gospel to 10,000 homes. Join us as media missionaries! GIVE NOW
VIEW COMMENTS
« When Jesus Told Me To Stop Being Nice This Could Be The Best Version Of ‘No Longer Slaves’ That You Will Ever Hear »