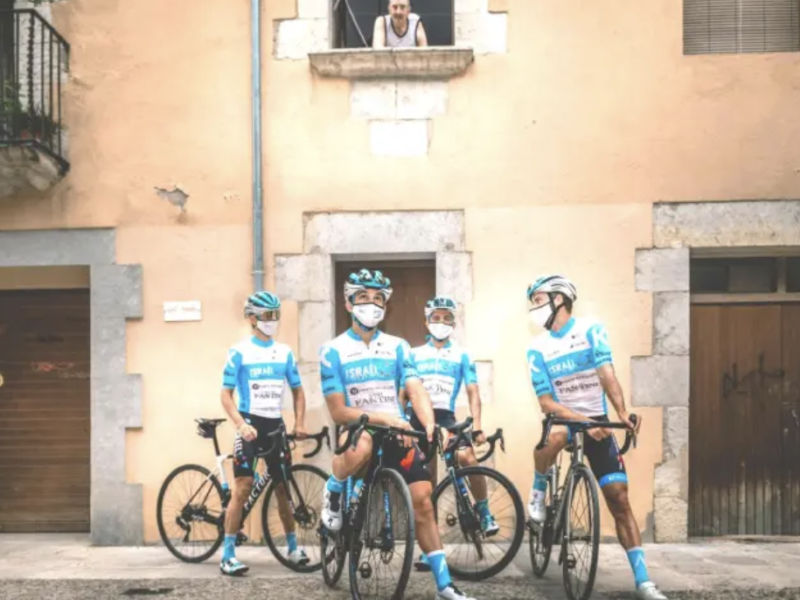 Ireland’s Dan Martin will lead team Israel Start-Up Nation in the Tour de France – the first time an Israeli team will participate in the hardest race in the world. The strong line-up supporting him also includes Guy Niv, the first Israeli rider ever to compete in the Tour.

Team co-owner Sylvan Adams called it “a dream come true. We are here not to just ride along but to be seen. We will be in the mix in every stage!”

“This team is more than just a team, this is a project and we are on a mission,” Adams said, saying the mission is promoting cycling in Israel and to promote Israel and to “show the real face of Israel, an Israel promoting peace, tolerance and diversity.”

Martin was strong in his return to racing after the Coronavirus shutdown but suffered a sacral fracture in the second stage of the Criterium du Dauphine only 13 days ago.

Rest, treatment and therapy have been effective, and he says he feels fine and “ready. I feel I can do something here in the Tour.”

In his eighth Tour, Martin will lead the way up the climbs. The team’s other leader is sprinter Greipel, in his tenth consecutive Tour, who aims to add to his total of 11 stage wins.

Guy Niv, 26, the first Israeli to ride the Tour de France, is the national time trial champion and has already started the Giro d’Italia twice.

The team has come a long way in its short history. Founded by Ran Margaliot and current co-owner Ron Baron in 2015 as the Israel Cycling Academy, it was the first professional cycling team in Israel.

Sylvan Adams joined shortly thereafter as co-owner, and the team moved up the ranks, achieving top-ranked WorldTour status for the 2020 season, under the name Israel Start-Up Nation.

While the Tour de France is the dream of every cyclist and every cycling team, competing in the race is not the only goal of Israel Start-Up Nation.

As Ron Baron said, “When we founded the team five years ago, we dreamed of this moment. But we strive for more than just the glory of racing in the Tour de France.  We want every kid in Israel to say, ‘I can be Guy Niv one day. I can get to the Tour.” We are committed to fostering young Israeli talent with our Israel Cycling Academy continental team, so I say to the young Israeli generation: The doors are open!”

Dan Martin is looking forward to his eighth Tour. “I expect to suffer through the first stages as I have missed a bit of training, but I am incredibly excited to use my experience in the race to help the team. Once I get back into the rhythm of racing, I will look for opportunities to take a stage win.”

Sprinter Andre Greipel is going for this tenth consecutive Tour, saying “It’s always great to be here. And this will be a great celebration as the first Tour for the Israeli team and with the first Israeli rider.”

Guy Niv took a moment to reflect and said that he is “honored and privileged to represent my country and team in the biggest race in cycling and one of the greatest sporting events in the world. And to be the first Israeli to do so? It might sound like a cliché, but it’s a dream come true. I have goosebumps just thinking about it. It’s huge. It’s something I’ve always wanted to do – and now we are about to make history. I cannot wait!”

For just $100 per month you can bring the gospel to 10,000 homes. Join us as media missionaries! GIVE NOW
VIEW COMMENTS
« Day After Attack, Israeli Families Establish ‘Ma’ale Shai’ Named After Terror Victim Rabbi Shai Ohayon America »