Things are changing… how do you handle transition? 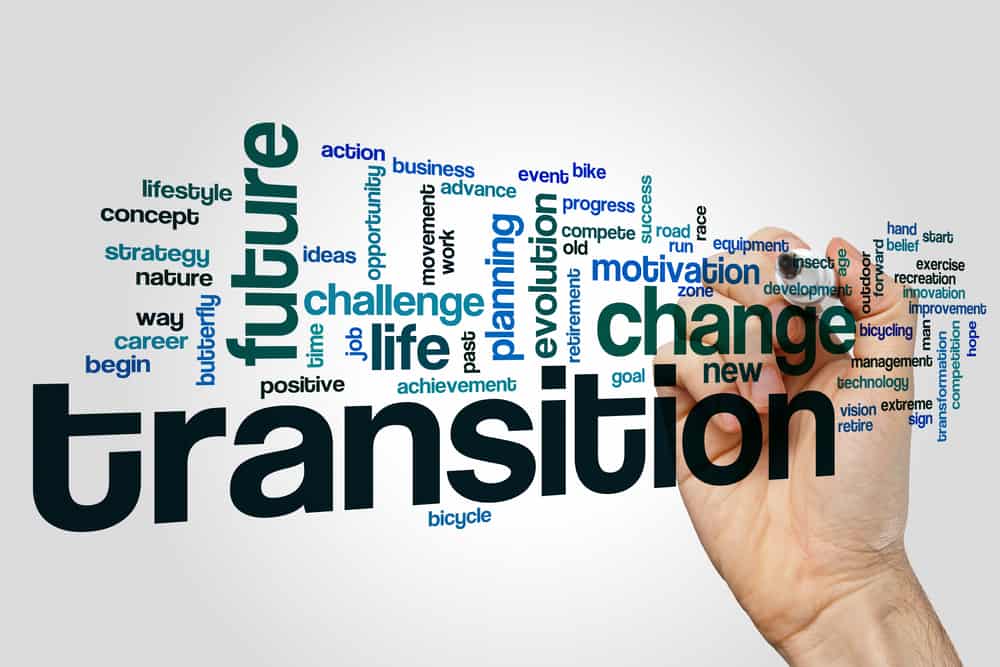 Transition is change in motion, who hasn’t had to deal with one change or another? They say that getting married is one of the most stressful transitions but so is having children, changing jobs or moving house. There are so many changes/transitions people can make, divorce, empty nest syndrome, the list could go on.

How do you deal with transition? Each person is different but as Christians we know we serve an amazing God who loves us and has the best plan for us. As Jeremiah 29:11 says: “For I know the plans I have for you declares the Lord, plans to prosper you and not to harm you, plans to give you hope and a future.”

One thing is for certain, no one can avoid transition. So, it’s important for us as Christians to trust the Lord. How do we do that? By reading His Word, by spending time in His presence listening. Sometimes it’s best not to do anything until you have His Peace about it. But there are times when you get the smallest instruction and it’s about taking that step of faith towards the change He is asking you to make.

I remember when soon after becoming a Christian the Lord asked me to move back to England from Florida. It was a quiet voice but I knew it was Him. My life had been turned upside down, and as I sat in my living room He said “It’s time to come home I have a work for you to do”.

I had a vision of Him helping me to pack my boxes and the feeling it was England my ‘home country’ that He was referring to. Interestingly the pieces fell into place for me, I took steps toward that change. One step was to call my landlord’s agent and let them know I wouldn’t be renewing my tenancy. They called me back and said I’d beat them to it as my landlord had decided to sell and I wouldn’t be able to renew it anyway. Then a new woman I befriended in our Church choir turned out to have a husband who was a shipping agent. Several other things happened that could only have been confirmation.

One of the things that kept me sane during that big transition was knowing God had my back. There were people including certain family members who thought I was crazy! But the key thing to remember is if God brought you to it He will get you through it.

Let’s Get Real about ‘Transition’

So whether you’re leaving home, going to college, getting married, having a baby, buying a house, moving house, getting divorced, starting a new job, suffering that empty nest syndrome or going through the menopause be reassured the Let’s Get Real panel have experienced it all and more. Join them on this episode of Let’s Get Real as they discuss how they’ve dealt with some of these transitions!

Also, Lirika Davis shares her experience of transitioning from Albania to England and how the Lord led her to start writing and hosting ‘Stiletto’ women’s conferences after having children.

Read more about Let’s Get Real including details of other episodes available online.

Deborah Armin is a British speaker and author based in the UK. She is a graduate of the London School of Theology and her first book, published by Authentic Media, is entitled On My Way Home, One Woman’s Journey in Search of the Unknown God. Deborah grew up in South Africa and Kuwait, before returning to England as a teenager when her parents separated. While working in America she became suicidal, had an encounter with God and promised Him she would help others in the same situations she had faced. On My Way Home is her life story. Deborah is also a staff writer for GODTV.com.