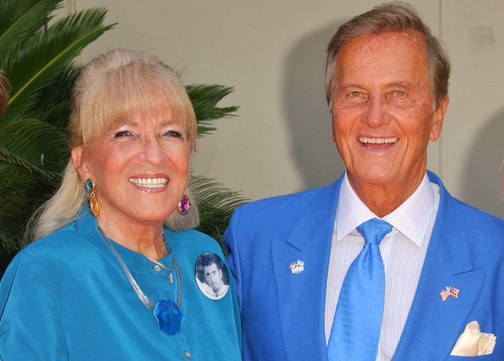 Together, Pat and Shirley Boone were a singing sensation. ‘Let Me Call You Sweetheart’, ‘Side By Side’ and ‘Vaya Con Dios (May God Be with You)’ are just three of the many hit songs they made famous before going on to raise their legendary family of singers that touched lives around the world. Now the matriarch of the Boone Family Singers has passed on, but she will not be forgotten. Her love of Jesus, kindness and compassion will be remembered,  her music will live on and the world will continue to be impacted through her children.

According to news reports Shirley passed away on Friday January 11th at the age of 84. Providentially, Pat (also 84) and their four daughters Debby, Cherry, Linda and Laura were with her when she died.  “We lived a wonderful, blessed life together for 65 years,” said Pat who is known worldwide as a legendary entertainer, actor and recording artist. “I’ve parted with my better half for a little while but we don’t die, we just move on to another place, and today was moving day. I expect to join her one day. I’m very confident of that.”

Let Me Call You Sweetheart

Such sentiments reflect the couple’s deep faith as well as some of the lines from the songs that made them famous. What a fitting example of a long and happy marriage Pat and Shirley Boone have set. They certainly learnt to keep “the love light glowing” as you will hear in the song below. Clearly Jesus was central to their relationship and we know that a threefold cord is not easily broken. Over 65 years of marriage is a remarkable achievement!

In their catchy song Side By Side the Boones showed their commitment to each other come what may. It’s not that they never had problems but they found the solution to these problems in God and the support of a church community. They may not have started out with much, but their relationship blossomed and became a great blessing to the world.

Shirley was born on April 24, 1934 in the USA as Shirley Lee Foley. In addition to her singing talents she became and actress and an assistant director, known for Hollywood Without Make-Up, Captain Nice and others.

According to CBS News, “Charles Eugene Boone, a direct descendant of Daniel Boone, was raised in Nashville, and thought he’d wind up as a teacher or a preacher. But with a movie star’s face and a voice to match, he became a true American idol.”

The two high school sweethearts were Homecoming King and Queen and married in November 1953. In the Fifties Pat was only second to Elvis Presley in terms of hits on the music charts and  co-starred with him in the movie, G.I. Blues! Pat and Shirley had many hit singles together and raised a beautiful family that became the Boone Family Singers of the 1970s.

Over a career that now tops six decades, Pat has recorded in nearly every musical genre – pop, rock, country, Gospel, folk, even heavy metal  and sold more than 45 million albums, with 38 Top 40 hits. He also recorded three Gospel albums in the 1970s as part of the Pat Boone Family.

Pat hosted “The Pat Boone Chevy Showroom” in 1957 featuring every major star in the country. He and Shirley and their four daughters performed on the final episode in 1960. Debby is perhaps the most well-known of Shirley’s children in the entertainment media for the song and movie, ‘You Light Up My Life!’ On the philanthropic side, Cherry is married to Dan O’Neill, co-founder of Mercy Corps, the global team of humanitarians who partner with communities, corporations and governments to transform lives around the world.

Pat and Shirley were the friends of presidents and became known for their philanthropy.  They supported several charity initiatives and in 2010 Pat visited East Africa with GOD TV as part of one of the network’s development initiatives at the time. “We are privileged to partner with Pat and Shirley to impact the everyday lives of people by building a community development center in Tanzania. The generosity of the Boone family inspires us to reach further,” a GOD TV report stated.

Vaya Con Dios (May God Be with You)

This song sung by Pat and Shirley is a poignant reminder that as believers God is with us wherever we go. Even in death and sadness, He is there. If we accept the free gift of salvation through His Son Jesus Christ, we will have eternal life.

It’s clear that God has had His hand on this extraordinary couple, using them for His Kingdom purposes. We now know that Shirley is in Heaven with God. Her heart’s cry would be that one day you would find your home in Heaven too.

Yes Vaya Con Dios means goodbye in Spanish.  However it literally means “Go With God”. May you be be inspired by the example of this extraordinary woman and may God be with you.