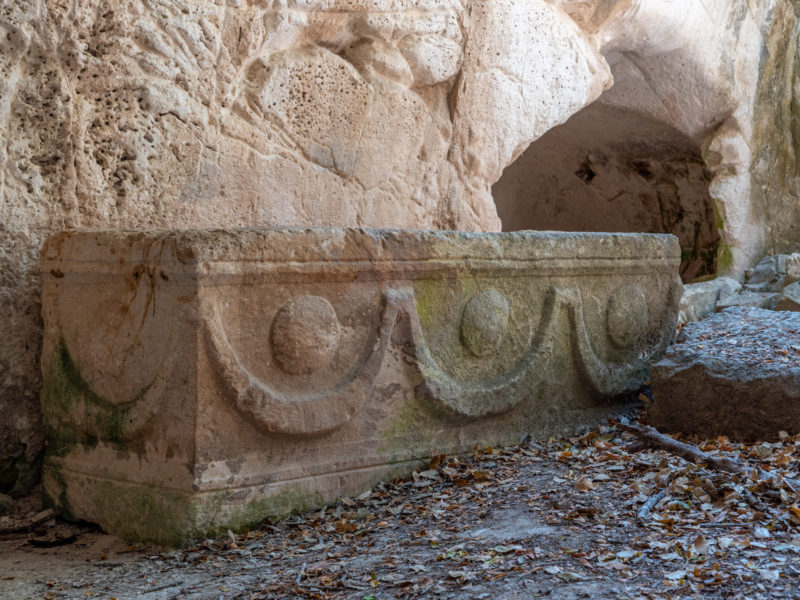 Construction to build an expansive new facility at Ramat Gan Safari Park, an addition to its wildlife hospital, led to the extraordinary uncovering of two unique sarcophagi, ancient stone coffins.

Veteran safari workers said that the coffins had been found years ago in the area of the safari’s parking lot. Over the years they were forgotten and were buried under sand and thick vegetation.

When work on the new wildlife hospital began a few days ago, the contractor noticed the two coffins jutting out of the soil.

Based on the stones and their ornate decoration, the sarcophagi were determined to have been intended for people of high status who were buried in the area.

According to Israel Antiquities Authority (IAA) archaeologists, the sarcophagi are roughly 1,800 years old and date from the Roman period.

They are ornamented with symbolic discs to protect and accompany the soul on its journey to the afterlife, and flower garlands often used to decorate sarcophagi.

Between the garlands are oval blanks, which the archaeologists believe were originally intended to be filled with a customary grape-cluster motif, but for some unknown reason, the work remained unfinished.

The sarcophagi, made of stone probably from the Judean Hills or Samaria, are locally-produced imitations of the prestigious sarcophagi made of Proconnesian marble from the Turkish island of Marmara.

The two sarcophagi bear identical ornamentation and may have been made for a husband and wife, or for members of the same family.

The exact provenance of the sarcophagi is unknown, but they were probably buried near the Safari Park, in the region of Messubim, the site of ancient Bnei Brak in the Roman period, known from the Passover Haggadah.

“The wealthy owners of the sarcophagi, buried with their personal goods, had no idea that the coffins would find a place of honor alongside giraffes, elephants and a bird nursery,” the IAA quipped.

The sarcophagi were transferred to the Israeli National Treasures repositories.

For just $100 per month you can bring the gospel to 10,000 homes. Join us as media missionaries! GIVE NOW
VIEW COMMENTS
« IDF Lifts COVID-19 Lockdown in Most Units; Numbers in Israel Drop From Drug Addict To Christian Minster: Bobbi Jo Reed’s Tough Journey To Sobriety »