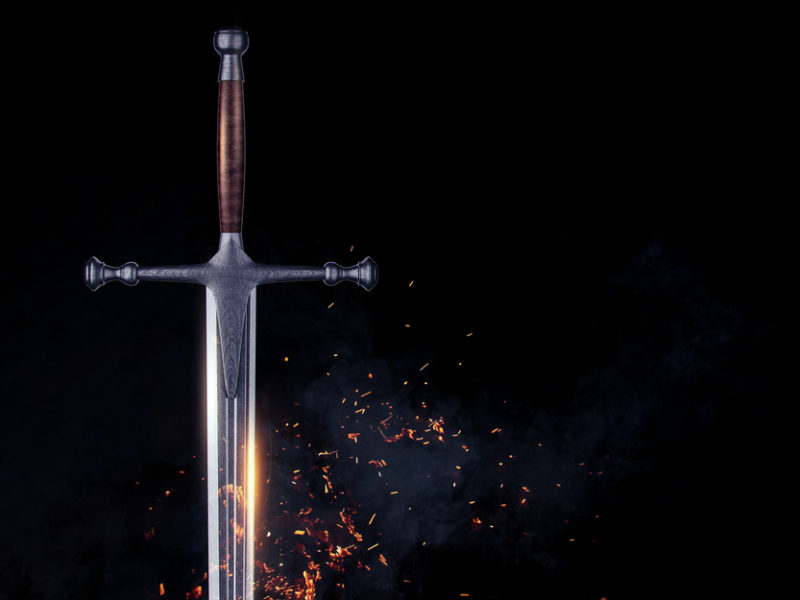 So much of spiritual warfare teaching infers a cosmic slugfest with the enemy. “Pray up,” “fast up,” “suit up,” we’re instructed, in order to prepare for battle with the prince of darkness.

“The issue with such teaching is that it largely relies upon our own efforts and often fails to consider Christ’s work that defeat Satan at the cross.” (Col. 2:14–15)

I’m certainly not suggesting that Satan is obliterated or that we won’t feel the heat of his attacks. He and his minions still loom. But their wiles won’t be defeated in our own strength or by our own efforts, as spiritual as they may seem. As I explore below, the key to sustained victory over the enemy has nothing to do with what we do, but everything to do with who we are. Keep reading.

The Uniform of Christ

Writing from a Roman prison, Paul observed soldiers moving about in their armored uniforms, and he used this uniform to correlate what Christians possess in the Lord.

“Be strong in the Lord and in the strength of his power. Put on the whole armor of God, so that you may be able to stand against the wiles of the devil.” – Ephesians 6:10–11

Notice that Paul instructs us to be strong and to find strength in the Lord’s power so that you may stand. He doesn’t say to put on the armor to fight, but that in the Lord you may maintain the standing of your identity in Christ against forces that seek to destroy it. God’s armor isn’t the armor of humans, after all (2 Cor. 10:4). No, it’s armor of light with weapons of righteousness (Rom. 13:12; 2 Cor. 6:7).

Let’s briefly explore what I detail much more completely in my 6-session armor of God study: how each article in the soldier’s armor uniquely holds us in the identity of Christ.

The Armor of God

In Paul’s day, the soldier’s belt was a thick leather strap, girdled around his waist, with metal strips hanging down to protect his reproductive organs.

Paul encourages to “fasten the belt of truth around your waist” (Eph. 6:14). Truth is foundational—it’s what grounds us. The truth of God’s Word is the only standard by which we can recognize and reject Satan’s lies.

Our belts also protect our life-giving functions. Satan seeks to accuse us so that we feel disqualified from God’s use. His lies and accusations attempt to sterilize us so that “I can’ts,” “I’m nots” and “I’ll nevers” keep us from doing anything daring or influencing anyone beyond ourselves. But the truth of God’s Word encourages us in who we are in Christ. Digest this truth today and repeat it every day: “I’m accepted and made worthy by the blood of Jesus Christ.”

The soldier’s breastplate provided a covering over each shoulder and the sides of the chest. As I display in my e-course, it’s possibly the most beautiful part of the armor because its bronze or iron scales reflect the sun as the soldier moves about. It’s heavy, though, possibly forty pounds or more. But the protection it provided over the heart and vital organs was worth its weight.

Paul instructs that the righteousness we have in Christ is like this soldier’s breastplate, which covers and protects the most vital parts of who we are.

Throughout Scripture, the word “heart” rarely refers to the blood-pumping organ that we know it as today. Instead, it’s most often used to describe the core being of the person—thoughts, emotions and any “inner function” of an individual.

Satan seeks to assault us at our core. His whispers and accusations are aimed to corrupt the parts of your inner self to steal your identity and replace it with his defeated one. But when you put on Jesus Christ, you put on this breastplate of righteousness, which covers you in His identity. Feel the weight of its protection and declare this now: “I am the righteousness of God in Christ Jesus” (2 Cor. 5:21).

Continue to explore the final 4 articles of the Armor of God.

For just $100 per month you can bring the gospel to 10,000 homes. Join us as media missionaries! GIVE NOW
VIEW COMMENTS
« How Christian Boarding Schools Fit Into The Education Process In The Search Of The Best College For Me: Canada Christian College »