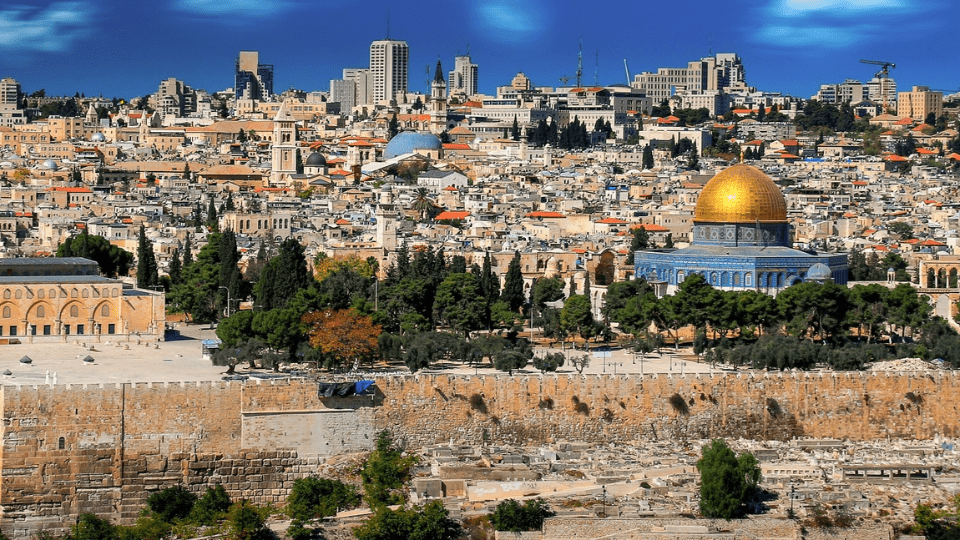 The Bible speaks of two Jerusalems; one earthly and one heavenly. The vast majority of scriptures speak of the earthly Jerusalem, yet there are references to heavenly Jerusalem in the New Covenant.

Galatians 4:26 – “the Jerusalem above is free, which is the mother of us all.”

Hebrews 12:22 – “You have come to Mount Zion and to the city of the living God, the heavenly Jerusalem…”

However rabbinic writings have always referred to a “Jerusalem of above” and a “Jerusalem of below.” And in the last generation, since the re-capture of Jerusalem in 1967, the Christian understanding of God’s plan for earthly Jerusalem has greatly increased. Interestingly, the Koran does not mention Jerusalem even once, and when Muslims in east Jerusalem pray, they turn their back to the Temple Mount and face Mecca.

Not only is there a heavenly Jerusalem, there is a heavenly Tabernacle within that city as well (see Revelation 15:5-8 and Exodus 25:40).

As with all aspects of His kingdom, God’s will is for a harmony between the heavenly reality and the earthly one. Whatever we bind on earth will be bound in heaven (Matthew 16:19, 18:18). We are to pray that God’s will shall be done on earth as it is in heaven (Matthew 6:10). God’s kingdom manifests when there is an alignment between the heavenly and the earthly.

Because of the separation between Israel and the Church over the past 2,000 years, there has not been the right harmony between the earthly and the heavenly Jerusalem. However, our generation is blessed to see the beginning of the reconciling of the two. God’s will for earthly and heavenly Jerusalem will be unified as Israel and the Church are reconciled.

Today as there are Messianic Jewish believers in Yeshua (Jesus) living in Israel, there are angels ascending and descending from heaven to earth and vice versa to bring about that harmony. Yeshua reigns in heavenly Jerusalem by right of being the Son of God; He will reign in earthly Jerusalem when He returns by right of being the Son of David. Thank God Yeshua is both (Romans 1:4).

Not only does Jerusalem on earth have importance in past history (binding of Isaac, David’s capital, Solomon’s temple, Yeshua’s death and resurrection), it also has importance in future prophecy (center of teaching and revival – Isaiah 2; end times battle – Zechariah 14; Yeshua’s second coming – Acts 1:11; the capital of the Millennial kingdom – Ezekiel 40- 48, Micah 4).

Revelation 3:12 – “New Jerusalem which comes down out of heaven from God…”

Revelation 21:2 – “I saw the holy city New Jerusalem, coming down out of heaven, prepared as a bride adorned for her husband.”

Revelation 21:10 – “the great city, the holy Jerusalem, descending out of heaven…”

There are over 1,000 references to Jerusalem in the Bible. It has a significant part to play in the kingdom of God. No wonder that it is the point of controversy and even warfare for all the nations of the world (Zechariah 12:3, 12:9, 14:2, 14:12). The joining of heavenly Jerusalem with the earthly represents the restoration of the Garden of Eden with heaven as it was before the Fall.

Thank you for partnering together with us as we pray for the peace of Jerusalem (Psalms 122:6), as we share the gospel here for all Israel to be saved (Acts 1:8, Romans 11:26); as we cry out for Yeshua to return, “Blessed is He who comes” (Matthew 23:39). Our partnership together is part of joining heavenly and earthly Jerusalem even now.

Asher Intrater serves as president and visionary on the leadership team of Tikkun Global, a worldwide family of ministries, congregations and leaders, dedicated to the dual restoration of Israel and the Church. He is the founder of Revive Israel, a five-fold ministry team based in Jerusalem, and oversees Ahavat Yeshua Congregation in Jerusalem and Tiferet Yeshua Congregation in Tel Aviv. Together with his wife and full-time partner in ministry, Betty, they share a passion for reaching Israelis with the message of Yeshua, seeing these new Israeli believers discipled into leadership. In addition, they long to witness the full unity of the Body of believers worldwide—even as Yeshua prayed in John 17, especially within the Abrahamic family. Asher was raised in a conservative Jewish home in the United States and holds degrees from Harvard University, Baltimore Hebrew College and Messiah Biblical Institute. He has authored numerous books and tracts, including: Covenant Relationships, Who Ate Lunch with Abraham, All Authority, Heroines and Alignment.