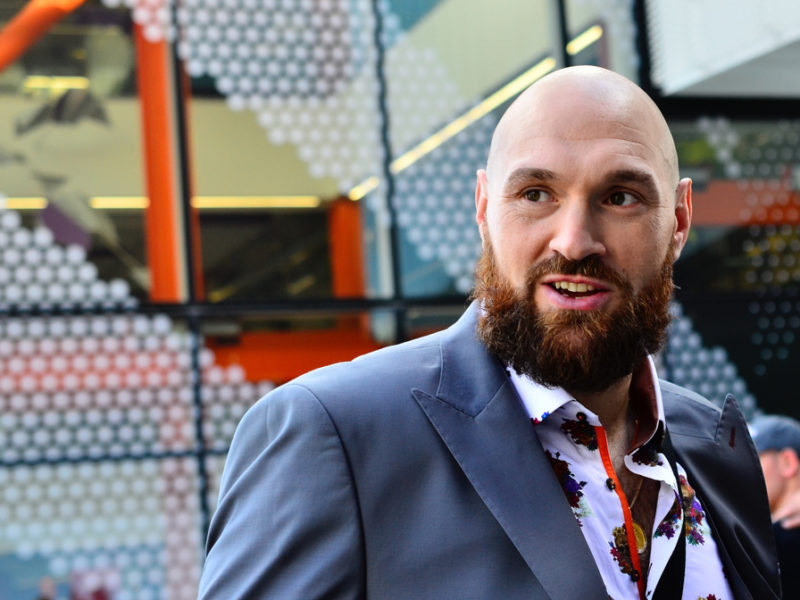 As I write these words, Adonis Stevenson, a 41-year-old professional boxer (and longtime champion) lies in critical condition after being knocked out in a fight Saturday night. So, in no way am I minimizing the brutality or danger of the sport, but there are some amazing stories to be told.

One of these stories involves British boxer Tyson Fury, a 6’ 9” giant of a man with a personality just as large, a man who has literally come back from the brink of death. During his fight on Saturday night (not against Stevenson, for whose recovery we pray), it’s as if he rose from near death as well.

Fury is known as the “Gypsy King,” reflecting his proud heritage as a British gypsy (a label more often associated with reproach rather than pride).

On November 28, 2015, Fury stunned the boxing world by defeating the long-reigning champion Wladimir Klitschko, proudly proclaiming his faith in Jesus Christ after the victory and even breaking out into a hymn.

To be clear, Fury hardly presented himself as a model Christian, lacing his after-fight talk with profanity. And in the days that followed, he also made some controversial comments, leading him to speak plainly about his faith and to clarify his remarks. In his words, “I wouldn’t be a very good Christian if I hated anybody, would I?”

But Fury’s life began to spiral out of control after his victory.

His weight ballooned to at least 380 pounds (he weighed 247 in his fight against Wladimir Klitschko), he drank heavily and had his boxing license suspended because of cocaine abuse, and he spoke openly about his battles with mental disease and suicide.

It looked like his career (if his not his life) was over.

Then, less than one year ago (on January 10, 2018), Tyson announced that he was reapplying for his boxing license and was making a comeback.

He proceeded to lose about 150 pounds, win two fights, and then fight to a disputed draw with world champion Deontay Wilder on Saturday night.

He survived a knockdown in the 9thround (an accomplishment in itself, since Wilder is the most fearsome puncher in boxing), but he was still leading the fight going into the last round.

Then, in that 12thand final round, Wilder knocked him down again with his concussive power, and Fury lay on his back, motionless, for five seconds. (He had to get up and be ready to fight by the count of 10. You can watch the raw footage here. For a vivid still shot, see here. The headline accompanying this picture proclaimed, “Sporting world loses it after Tyson Fury somehow survives vicious Deontay Wilder knockdown.”)

The champion, Wilder, for his part, was already celebrating, knowing that no human being could get up from a knockdown like that.

As Wilder said in the post-fight press conference, “I literally seen this man’s eyes roll into the back of his head. Only God knows how he got back up.”

In answer to a reporter’s question during his part of the post-fight conference, “How did I get up from the knockdowns? I don’t know. I had a holy hand upon me tonight and brought me back.”

“When I was down… I was representing everybody around the world. I had to get back up.”

That seems to be a viable explanation.

I didn’t watch the fight, but viewing the video footage afterwards, it sure looks like someone (or something) brought him back from the brink.

But Fury had more to say at the press conferences, speaking quite openly, as he always does. He explained, “when I sit here and I say I was on the brink of suicide, I mean suicide.

“I fought back from suicide and mental health and depression and anxiety and I wanted more than anything tonight to show the world that it can be done. Anything is possible with the right mindset. If you believe in yourself and you sacrifice and you dedicate with the right help. …

“And when I was down, I wasn’t just down on the canvas in round 12 for me and my family. I was representing everybody around the world. I had to get back up. I couldn’t stay down. I had to get up and show that you can continue, that you can carry on and anything is possible.”

Fury’s 12th round comeback, then, was emblematic of the remarkable comeback in his own life. (It was so dramatic that, within minutes, it was being parodied.) He was down for the count but somehow managed to get back up and even fight on, quite successfully, with the help of a “holy hand.”

But there’s still more to the story. Fury will earn multiplied millions of dollars for the fight, yet he doesn’t plan to keep it. As he said to the Irish Mirror, “I’m going to give it to the poor and I’m going to build homes for the homeless.

“I don’t really have much use for it, I’m not interested in becoming a millionaire or a billionaire. I’m a boxer not a businessman and I’ll probably go down the same route as every other boxer – skint [meaning, having little or nothing] at the end of it all.”

But, as he said, “You can’t take it with you so I might as well do something with it and help out people who can’t help themselves.”

That’s quite a statement, especially from a man who makes his living in the violent sport of boxing. And while it would be easy to condemn for his very obvious flaws, to me, he is picture of redemption.

By himself, he is lost – hopeless, addicted, depressed, and suicidal.

At his best, he is outspoken in his faith but offensive and full of rough spots.

Yet raised up from near death by a holy hand, severely knocked down but not knocked out, he comes back even stronger in the end.

While it’s all too-easy to judge a flawed giant like Tyson Fury (“What kind of Christian uses that kind of language and behaves like that?”), to me, his life and his recovery from the Saturday night knockdown shout the message of grace, forgiveness, redemption, and new life.

(One final, parenthetical note. I don’t want to sound sanctimonious, but it would be foolish to think Fury’s battles are over. Those who know how to pray should pray for him to stand strong and to become an ambassador for new life in Jesus.)

For just $100 per month you can bring the gospel to 10,000 homes. Join us as media missionaries! GIVE NOW
VIEW COMMENTS
« The Four Expressions Of The Creative Jesus And How You Can Be Like Him 14-Year-Old Girl Worships God On The Voice By Performing Lauren Daigle’s ‘You Say’ »