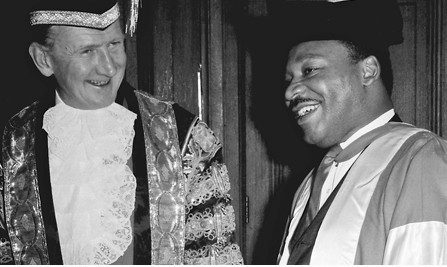 When Martin Luther King was assassinated in April 1968, he died a truly great American, but he is much more than that today. Fifty years on he is now a global figure who inspires people everywhere to embrace equality. And today, new generations are being told of his outstanding contribution to making the world a better place.

Annually the USA celebrates Martin Luther King Day as a federal holiday on the third Monday of January. This takes place around Dr King’s birthday (January 15th). Streets and highways have been named after him in many cities; his face can be found on postage stamps in different countries; and there are several statues and memorials dedicated to his memory.

The words of Dr King are often quoted, especially his famous ‘I Have a Dream’ speech given on the National Mall in Washington, DC and many quotable quotes are attributed to him. It is clear that Martin Luther King is a dearly loved figure throughout the world and especially in Great Britain.

Martin Luther King and the UK

Dr King made a huge impression on the British public when visiting the UK in 1967, the year before his death, to receive a Doctorate in Civil Law at Newcastle University.  It was in the North East of England that Dr King spoke of “A beautiful symphony of brotherhood that would speed up the day when, all over the world, justice would roll down like water and righteousness like a mighty stream.” 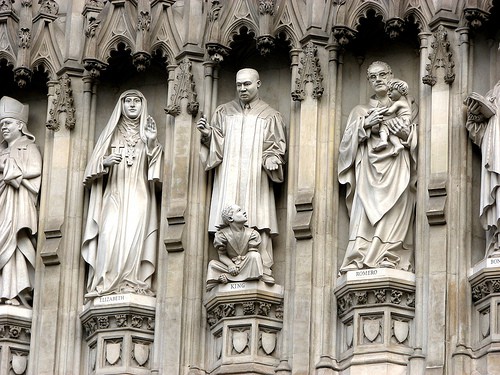 30 years after his death a statue of Dr King was unveiled at Westminster Abbey in London in July 1998 and stands above the west entrance to the Abbey.

On the 50thAnniversary of his death, British Prime Minister, Theresa May wrote, “Today, people around the world celebrate the life and legacy of Dr Martin Luther King Jr, whose fight for racial equality inspired millions around the world. Half a century after his death, we continue to honour his legacy.”

In 2017 the city of Newcastle held a year-long celebration of Dr King’s life, known as Freedom City. The project brought together international artists, musicians, filmmakers, academics and community groups to inspire a new generation to help tackle the issues Dr King fought against.

“There are three urgent and indeed great problems that we face not only in the USA, but all over the world,” Dr King said at the University during his acceptance speech. “That is the problem of racism, the problem of poverty and the problem of war.”

These are still huge issues today, which many Christian leaders here in the UK are concerned about. One such leader is Dr Krish Kandiah, formerly with the London School of Theology and now an author and social activist. “Martin Luther King’s dream for racial justice is needed now as much as ever. We must speak up,” said Dr Kandiah.

British faith-based publication, Christian Today (Headquartered in London with staff in New York) captures Dr King’s ministry most eloquently: “Martin Luther King, murdered 50 years ago, was a Baptist minister and one of the leaders of the Civil Rights Movement that challenged the oppression of black people in the USA. A spellbinding orator, his courage and vision helped galvanise resistance to systematic and brutal discrimination. But his message throughout was one of love, not hate – he preached non-violence and understanding alongside confrontation and challenge.”

This example of non violence is one we can all follow, especially people of faith who know the depth of God’s love for all people. Despite the rise of secular humanism in the UK, it’s encouraging that people still recognise the importance of Dr King’s faith as the underlying driving force that propelled him to accomplish all he did, albeit in a short space of time.

You can watch Martin Luther King’s speech at Newcastle University where the University’s Public Orator described him as a ‘Christian pastor and social revolutionary’ and as Brian Ward points out, “yoking together two roles that King saw as virtually synonymous.”

In his book, Brian concludes: “For King personal faith in God’s divine plan for a world that would ultimately be defined by peace and justice was the driving force of his social activism. King’s faith demanded that he work towards a peaceful social revolution that would end racism, war and poverty. Above all, King believed that bold, responsible, collective action directed towards a vision of social equality, economic justice and respect for difference would increase the likelihood – and hasten the day – when peace, freedom and justice would prevail…

“Fifty years after his visit… the need to rise to the challenges that Martin Luther King laid down in Newcastle had never been greater. Nor had his confidence that by dealing ‘forthrightly and in depth with these great and grave problems that pervade our world,’ it would be possible to ‘transform the jangling discords of our nation, and of all the nations of the world, into a beautiful symphony of brotherhood’, ever been more sorely tested by global events or more valuable in inspiring a new generation to meet the trials of an uncertain future.”

Brian Ward’s book, Martin Luther King: In Newcastle Upon Tyne: The African American Freedom Struggle and Race Relations in the North East of England is available on Amazon.

For just $100 per month you can bring the gospel to 10,000 homes. Join us as media missionaries! GIVE NOW
VIEW COMMENTS
« Israeli Navy Rescues Drifting French Sailor Know The Cause: 3 Things To Know About Harmful Fungi And Your Health »