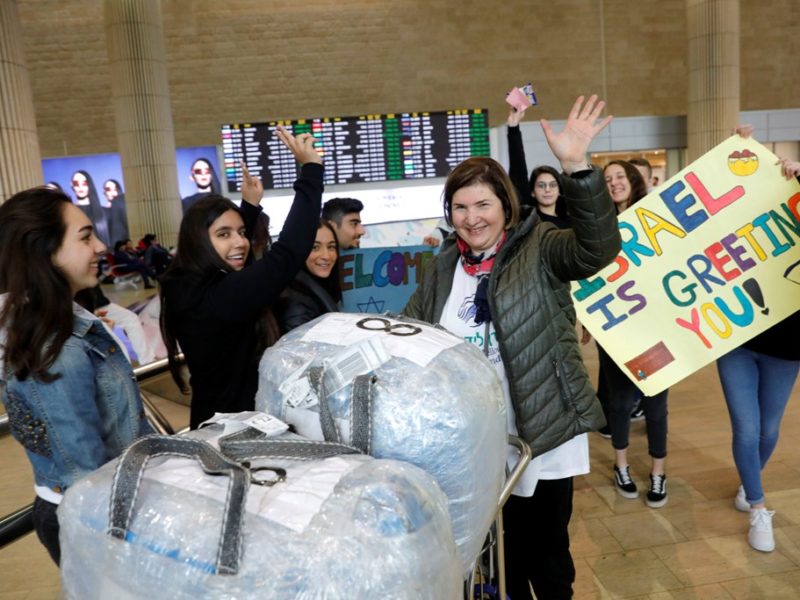 Around 250 Olim (new immigrants) from Ukraine landed in Israel on Monday on a flight organized by International Fellowship of Christians and Jews (IFCJ), the sixth such flight since the beginning of the year.

The ages of the Olim ranged from eight months to 82 years old.

Several of the newcomers have chosen to settle in the Negev region, and others are moving to the Gaza Strip area, a region that has recently faced the renewed Hamas rocket attacks from the Strip.

“The Fellowship’s first concern is to secure Jews from the threats and dangers of anti-Semitism, which is why we’re bringing them to Israel,” said IFCJ Yael Eckstein. “It is inspiring to us all that the passion and Zionism is so intense among some of them that they insist on moving to the Gaza periphery and feel fully confident and excited to do so.”

Vladimir Levin and his wife are following their son and settling in Kibbutz Tze’elim, located in the Eshkol Regional Council, which borders the Gaza Strip. Vladimir said that just as his son is not deterred from living in Tze’elim, he and his wife refuse to be discouraged by the threat of terrorism.

Yelena Tackshenko and her family moved to Kibbutz Ein HaShlosha, likewise located in the Eshkol Regional Council. The kibbutz is located so close to Gaza that its residents have only 15 seconds to run for cover after hearing a siren and before the rocket impacts.

Despite the ongoing security threats in the region, 25-year-old Daniel Popov said that he was “not afraid of the situation. My friends have served in the army for four years and told me of their experiences. I know that the IDF is strong, and I am happy to be here!”

For just $100 per month you can bring the gospel to 10,000 homes. Join us as media missionaries! GIVE NOW
VIEW COMMENTS
« 40 Days to Overcome – Day 20 WATCH: Olim Get Their First Taste of Israeli Democracy »